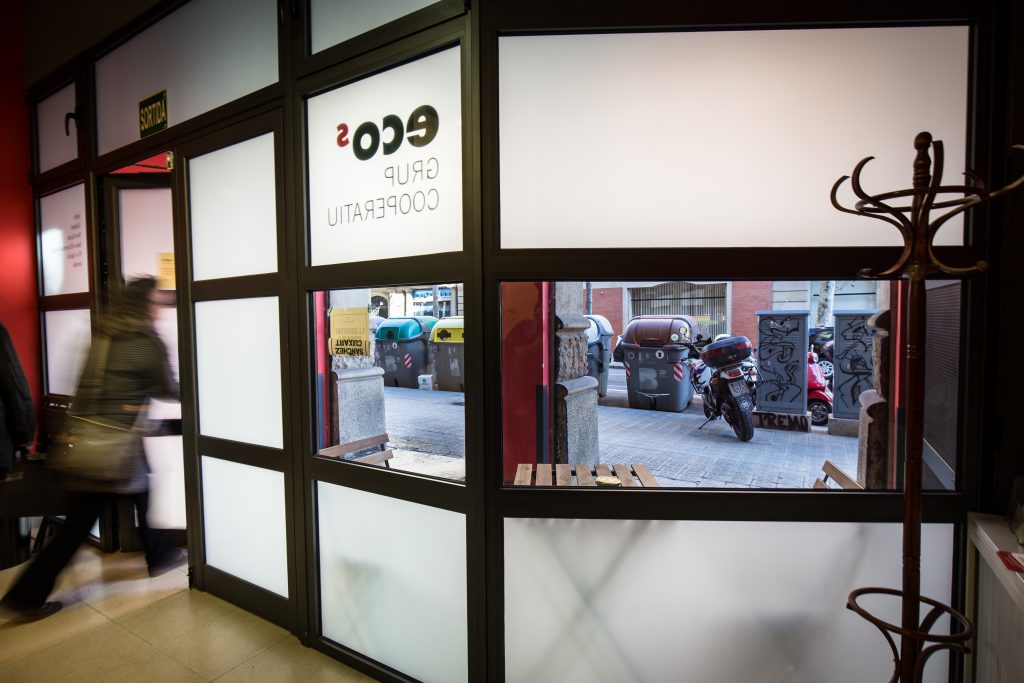 Ecos is a cooperative of cooperatives which works to support the growth of single cooperatives and to promote inter-cooperatives projects in Barcelona. In this article, we share what we learned from Roger, the coordinator of Ecos, and Guernica, a member of the organisation, who explained us how does social solidarity economy work in Barcelona and told us about Ecos’ history and goals.

Ecos is a cooperative of cooperatives, a second-degree cooperative. We started developing this project in 2009, at the beginning of the economic crisis. At that time, we were all small cooperatives and each of us was providing services – such as communications services, insurance, messaging, etc. We decided to create an umbrella for all our activities while preserving our own activities. In Ecos, we don’t share our economic activity, each of us has its own, but we work collectively to achieve common goals.  We want to work together to increase our visibility as service providers and as social and solidarity economy providers. We also share resources, and the first resource we share is the location. Each of us used to work in private offices but, by creating Ecos, we decided to share a big co-working space. We managed two spaces, one smaller and one bigger, 5 minutes walking distance from each other. Four of our eighteen members work in external spaces, but we also rent office space for associations who are not Ecos members.

Today, 18 cooperatives are part of Ecos, and Ecos hired two people who only work in the second level cooperative. Our cooperatives work in a very diverse field and for now, we never encounter competition. We always need to reflect on the possibility of having new cooperatives joining, especially when they might be direct competitors of cooperatives who are already part of our group. We want to support each other, and for this reason, whenever we need a provider, we try to collaborate internally, and as Ecos, we prefer to hire internal cooperatives when we are in need of a service provider. In long term, we want to share the development of new projects.

We officially opened Ecos in 2011, after two years of planning. During the planning phase we discussed our single cooperative situations at the time and our future expectations, we shared ideas and principles, and we agreed upon a set of commitments.

We created Ecos to share projects in common and to create new projects together.  We are interested in inter-cooperative cooperation both structurally but also by supporting each other, to exchange knowledge and skills and interlink our projects. Since we have begun our work, we have opened five new cooperatives:
– LabCoop, which promotes social and cooperative entrepreneurship
– Quèviure distributes eco conserved food
– Fem Escala, which manages community neighbors houses. Here in Spain, community neighbors houses are usually managed by neighbors administrators, but this is an unclear sector which is not transparent either in its organizational structure not in its budgeting. We decided to create a cooperative that manages community neighbors houses.
– Opcions puts in common consumptions cooperatives that manage communities buildings and Abacos which provides books and school supplies, DDDD, green energy, EEEE, phone services.
– Perviure, helping groups with legal, economic and financial and relations to have access to cooperatives for Co-housing projects.

Today, we are in good relations with public administrations. The 2016-2018 has been a sweet period! Thanks to the recent big social mobilization which took place here in Barcelona, we experience a change in the local and regional government that is beneficial for us.  In Catalonia, there is a network of municipalities engaging into social solidarity economy and the network is lead by the city of Barcelona. The Region promotes cooperative economy with European Funds, which aim at the creation of new employment opportunities and the opening of new cooperatives. Nowadays, many social and solidarity organizations receive money to promote the growth of new cooperatives and the transformation to cooperatives of already existing businesses.

Moreover, in Spain, there are new regulations that support social economy. The Barcelona City Council is including social solidarity economy in its functioning and it is checking on the actual implementation of this economic model. In Barcelona, today we have social solidarity economy and cooperative economy policies and support our work. The support received from the local government is a form of soft help, which consists of spaces, training, assessments programs, public procurements.  The city council does never give money directly to the cooperatives but it gives funds to the cooperative workers: when one becomes a cooperative worker and invests capital in a cooperative share, the regional government helps the individual with a small percentage of direct money invested.

In Spain, there is a small movement promoting access to housing by the co-housing. You get access to a house by being members of a cooperative, if you leave the house you would lose the housing right. This system is frequently used in Uruguay and Denmark and it has been implemented here in Spain as well in some administrations.

Often the city councils give land or buildings for long-term use to the cooperative. Sometimes the building is being constructed or restructured. The city council in Barcelona is also working in this direction and it wants to define the house as a public service, but this is a long term work and we are not sure of its feasibility because of our political instability.

Can Social Solidarity Economy be the future model?

We often discuss the issue of the commons. There is now a movement promoting the commons, digital and non-digital, and we are intrested in how society can manage the commons. We are also reflecting on these issues, some members of Ecos are directly working on the issues of the digital commons (Facto, a research consultancy, who manages licensing and support, databases; Junglo, a technology provider who uses open source resources).  In the future, we hope to adopt a server in propriety and structuring a database to be in commons and some of us are using already Commons Cloud tools as a platform, which in the future could substitute Google Drive.

Until today, we don’t have specific data about Social Solidarity Economy but according to a research requested by the City Council, there are 67.000 companies whose work is  based on social solidarity economy, and they represent 2.8% of the companies in Barcelona, they have 5300 employees which represent 8% of the labor force in Barcelona, and they produce about  7% GDP of Barcelona.

We are expecting big changes in the political context here in Barcelona and we don’t know how the future political changes will impact social solidarity economy. The new economic system we want to implement can only be achieved in time and with a deep change in our economic setting. Good legislation help us and are very positive for our work, but they expect a very rapid change. The new catalan Social Economy legislation is bringing a very quick change but if these policies would stop, then we will be left with nothing. The rhythm of change in working conditions should be slower so it can consolidate. Solidarity economy is a slow process that requires people’s commitment. For this reason, we try to be as independent as possible and to create our own financial resources because we don’t want to rely on the political sphere.

Our goal is to spread the social solidarity economy mentality in people, and to motivate common citizens into chaning their consumption and production strategies, regardless of the institutional support. At now, we need public support but we try to create our own resources and financial tools.  But, we also want to create stronger relations between the local traditional economy entities present in our cities and social solidarity economy. We always say that the real economy is the local economy and our challenge is to build a network with the local commerce which can contrast bigger speculative conglomerates.

Interview by Levente Polyák with members of Ecos on November 13th, 2018.