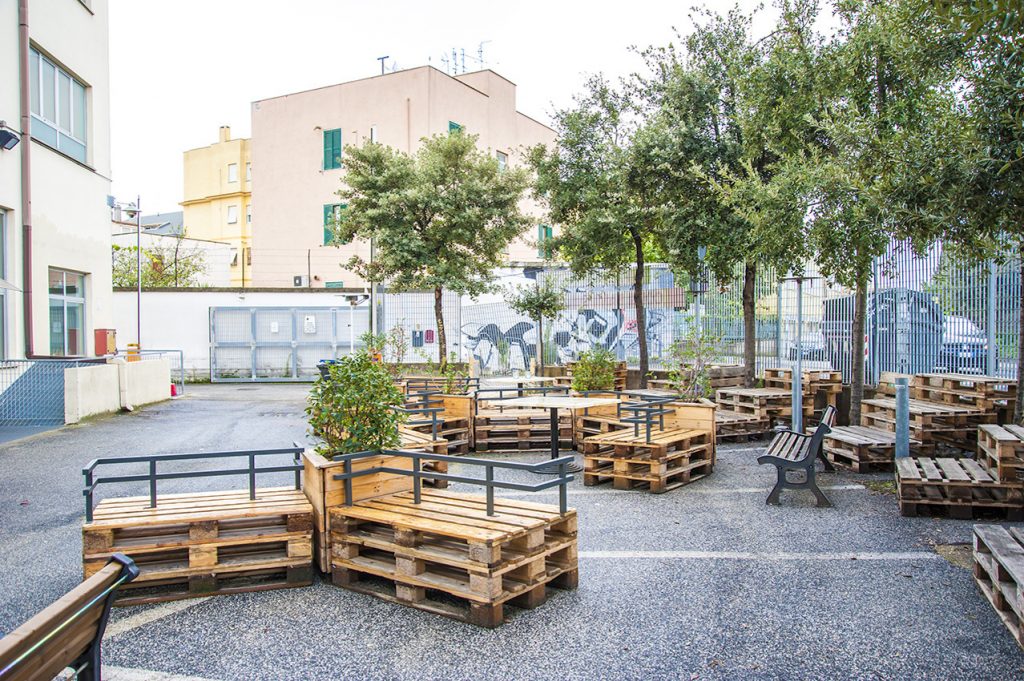 Fusolab is a non-profit community hub in Rome’s Eastern periphery, offering educational activities within the arts, communication, technology, new media, sports and a variety of other fields. With a strong focus on the neighbouring Alessandrino and Torre Maura districts, among the most disadvantaged areas of the Italian capital, Fusolab works closely with local communities, connecting the idea of solidarity with social innovation.

Fusolab was founded in 2004 and started as Fusoradio, one of the first webradios in Italy. Its initial activities were typical of an organization for social advancement, and its first headquarters were in the Prenestino district. During 2012 it moved to its present location, settling down in an abandoned space owned by the adjacent supermarket and shopping mall. That was the moment when Fusolab broadened its horizons and dedicated itself to life-long learning activities, now offering about 200 courses, many of which are focused on digital arts. Being a non-profit association for social advancement, their commercial activities are finalized to the improvement of the association.

Fusolab is very active regarding the organization of cultural events. The biggest one is Periferica, a digital arts and live performance festival, contributing to bringing some cultural activity to this peripheral part of town. The association is now focusing on sports as well, managing a gym named after Brazilian center-field player Sócrates. This was a really good move, as now about 1500 people come to Fusolab to use the gym and /or to attend courses, thus enhancing its attractiveness.

The building was arranged so that the ground floor is used for the bar, the restaurant and the gym, while the first and second floors are used for courses and events, in addition to a space for a dance school. Even if most of the people who come here live in the district, whenever there are bigger events people come from all over the city. In some cases, more than 1000 people were present at a concert. The same goes for courses: some of them, such as digital scenography, are not available anywhere else in Rome, so in that case people from all districts come to Fusolab.

Considering the fact that the Alessandrino district counts about 10.000 residents, Fusolab practically offers services to roughly more than 10% of the local population, making it possible to pay the annual lease to the owners. All basic activities are funded by the people who come here, while participation in several public projects grants some public funding. Local institutions are also present in the development of the project: for instance, the Municipality of Rome significantly sponsored and financed Periferica Festival. As for the staff, about 30 people work here regularly and another 40 people offer services related to the various activities proposed by Fusolab.

Community building between the neighborhood and the surrounding ones is the new challenge. The creation of an entity that is going to expand the outreach of all involved fields of interest, an umbrella organization for other active citizenship and community empowerment initiatives will be the tool. Some very big organizations will be involved in this, such as WWF, Lega Coop (confederation for cooperation development) and Enea (National Agency for technology, energy and sustainable development).

Interview with Dario Minghetti on 22 September 2018