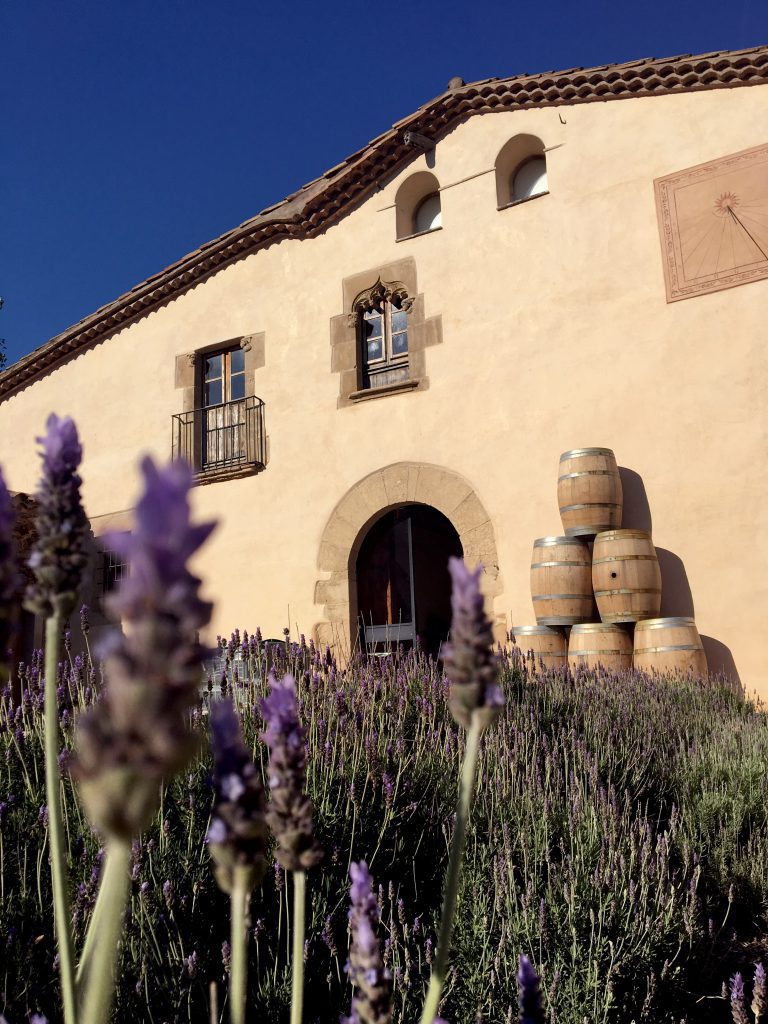 The cooperative L’Olivera manages agriculture projects with social impact in the countryside outside Barcelona. Last autumn we visited Masia Can Calopa, where L’Olivera has cultivated a vineyard plantation and which produces Catalonian employing youngsters with mental disabilities, who live and work at Masia Can Calopa de Dalt.

How did the project L’Olivera started?

The project L’Olivera started in 1974, from the idea of a group of young people who decided to  move from Barcelona to an abandoned area called Vallbona de les Monges. There, the group wanted to develop a series of agriculture projects that would have a social impact and would include people with disabilities. For the first years, we only worked on agriculture culture, we only started to make wine in 1989. Today, L’Olivera manages 40 hectares of vineyard plantation that produces about 200.000 kilos of grapes a year. We also have olive oil production with about 20 hectares of olive trees.

In 2001, the Municipality of Barcelona developed an experimental vineyard project with the intention of representing the Mediterranean wine heritage. Few years later, in 2005, they asked us to contribute to their project by implementing a social inclusion program and they also asked us to take upon ourselves the vineyard culture. In short, they wanted us to reproduce the model we were successfully using in Vallbona also here, in Masia Can Calopa. We accepted and, we have been managing and working the vineyard plantation in Masia Can Calopa, since 2010.

How did you contribute to the already existing Barcelona City Council vineyard culture and wine production?

We changed many structure and functioning aspects of Can Calopa vineyards plantation. The Barcelona City Council project was originally intended as an institutional program which aimed to represent and to promote the Mediterranean vineyards and wines. They planted five different varieties of grapes that they consider would represent the best of the Mediterranean vineyards: Agiorgitiko from Greece, Aglianico and Sangiovese from Italy, Grenache from Spain, and the widespread Syrah grape variety. The wine produced here didn’t use to have a commercial value or purpose but it was only produced for institutional purposes: it was donated as gift or served to Masia Can Calopa’s guests.

We decided to change the original concept from an institutional concept to a productive concept, and for this reason we decided to remove foreigner varieties and plant only Spain native grape varieties. The first reason of this choice is that we know that the foreigner varieties are not suitable for this climate and therefore they are not productive, but on the opposite they require more work to grow the grapes, to harvest, to treat, to prun. The second reason is that in this region we produce wine under the denomination “wine from Catalonia”, and this denomination does not allow us to sell Agiorgitiko, Aglianico and Sangiovese wines. We are now only keeping the Syrah and Grinas grape varieties.

In 2010, we started to work the vineyard in Masia Can Calopa, and in 2016 we started selling the wines. To be able to start selling our production, we had to also rebuild the Masia itself, an ancestral catalonian houses from 1574. We renovated it in agreement with the Municipality of Barcelona, and we established an agro shop open to public,where we can hold wine tasting events. We have always wanted the Masia Can Calopa project to be open project to newcomers and accessible and this is why we promote visits and tours.

The changes we made allow us to maintain a productive project that becomes real and survives in time. The former owner used to manage about 60 hectares of grapevines and all the viticultures had to bring their grapes here so that the owner could control the entire plantation production (we still have an old press from the 16th century!). Today, we have the capacity to produce almost 20.000 bottles, but we want to increase the winery’s space in the future. We produce six different types of red wine and we bring the white wine to Vallbona, where we have more suitable equipment dedicated to white wine production. Here in Can Calopa we oversee the entire process of wine production following artisanal methods for the fermentation, the bottling, labeling and expedition and we have a distribution session twice a week.

What is your goal as a cooperative?

Our goal as a cooperative is to preserving the practice of agriculture by producing quality products and by overcoming social inequality. Masia Can Calopa is located inside the Natural Park of Collserola, a park that extends for over 9000 hectares. In the 1950s, about 27% of this land used to be agricultural, and specifically vineyards and olive trees plantation, but now is only 3% remains dedicated to agriculture. For us, it is very important to vehicular agriculture and the urban because, we think that the “smart city” is not just about technological development but also about quality food, green spaces and nature preservation. In many cities social-agriculture has a central role, for example in Paris, Lisbon or Montpellier. For this reason, we have been consulting for years with two professors from the University of Pisa in Italy who help us improving our understanding of social-agriculture.

We are trying to preserve the heritage of agriculture in this land and, through our work, we are able to also create new employment opportunities for people with different abilities. Can Calopa employs 25 people, and about half of them have various disabilities: 12 out of the 16 people with different abilities also live in Can Calopa, in a building we built recently for this purpose. . Most of our workers come from a social difficult background, and many have also been in detention centers for minors. For most of them, this is the first working experience. We try to educate them and help them in creating life and working habits, such as  taking care of their own laundry, washing clothes, being punctual in the morning, beside of course the practice of vineyard plantation and wine production.

How do you combine the social inclusion aspect with quality production?

This building was designed for hosting youngsters and it has the facilities needed to allow them to be independent and to develop important skills that will help them in life. On the ground floor, there is social area – with the lunch space, a kitchen with a cook, administrative office. They have lunch and breakfast here together and they help setting the tables and cleaning the room after eating. On the weekend, they are more independent and they cook on their own. They also have a space for the laundry, in the basement.

The working hours are from Monday to Wednesday from 8 till 16.45 with a lunch break, and Thursday and Friday from 7.30 to 14.45. We have two vans they can use to travel to other municipalities closeby where they do sports activities and follow up with their hobbies. A psychologist comes once a week and a volunteer doctor visits one a week, although most of them generally visit their psychologists outside this facility. There are social workers who control their medicines in the morning and evenings.

We only employ people with mental disabilities as ours is a physical labor, not suitable for people with physical impairments. They all receive substances from the city council because of their health conditions, but their salaries come from the wine production. We also have subsistences to support them in moving outside Masia Can Calopa. Now, 4 of our works moved to the town close by called Molins de Rei, after living in Masia Can Calopa for four years. Because we are a cooperative, all our workers have to become members after their first two years of work, with the exclusion of the ones who are part of the social work center who can choose if they want to become members or not. We also have non-working-members who collaborate with us.

Which are your main challenges?

Climate change has a strong impact on our production. Luckily, we have good weather, but the fauna (especially birds, insects, wildbores) is difficult to fight. It is easier to do agriculture when there are other people doing it around you, but if you are alone as all the animals from everywhere come here because the grapes are the only fruits to grow in the entire part. This year we lost almost 50% of our harvest because of wildbores and wasps. L’Olivera has other vineyards outside Can Calopa, and we always cover all the vineyards with nets but we never needed nets here in Can Calopa, but we have to add net on next year plantation.

A second challenge we always have to constantly think about how to present ourselves to the public. For many is hard to imagine making wine in Barcelona and this forces us to constantly re-consider our storytelling and our planning.

For us being able to sell our entire wine production is a great achievement, and we are proud to say that each year we sold all our wine. But we are also happy because our project is creating employment opportunities and it is helping the development of local associations in the area.  All across The Natural Park of Collserola, we created many associations and we held meetings with different entrepreneurs to speak about the impact of the park and its changes. We want to favor new projects access to the park and help them because we have the experience of working here. We have coaching and training and we are trying to create a network across the projects of the area.

Where do you want to be in the future?

Our main concern is to keep project alive and to grow. Agriculture is a long-term project, and we always need to think in cycles of ten years. Many of other projects L’Olivera is involved in are already well established and we cannot really enlarge them, but we still have to grow and to increase our production in Can Calopa: in only three years we doubled the number of bottles we produce but we haven’t reached our ideal number: 20.000 bottles per year.

We work in close cooperation with the Municipality of Barcelona. For example, our buildings and the land are municipality properties. We had a long-term agreement and we are now renovating it in order to plan our work in the incoming year. We always negotiate agreements of 25 years or 50 years, because only long-term planning allows us to cover the costs of initial investment, planting vineyards, and to be sustainable in time. Yet, we never think in terms of indefinite growing but in creating a model of a social economy that can be reproduced somewhere. We are working on a European level to promote this program, and we are the Spanish representatives in the Vitimov program that aims to create an Erasmus program for people with different abilities.

We also collaborate with universities, including the University Autonoma de Barcelona and the University of Agriculture in Castelldefels, to improve our projects. Now an agriculture student is working with us on the harvest, and last year we a student from Italy came. The university collaboration also follows the Vallbona model, as in Vallbona we have always had students coming from all around the world and we collaborate with universities in Spain but also outside – in Mexico, Chile, Argentina, Italy, France.

L’Olivera has two different realities with different characteristics and goals: Vallbona is a rural area, where people are older and the goal is to support these working with us in becoming part of the rural community already established; in Masia Can Calopa, the members are younger and they come from a social difficult background in Barcelona and our purpose is not to educate all of them as farmers but more to train them to for their next steps in life.