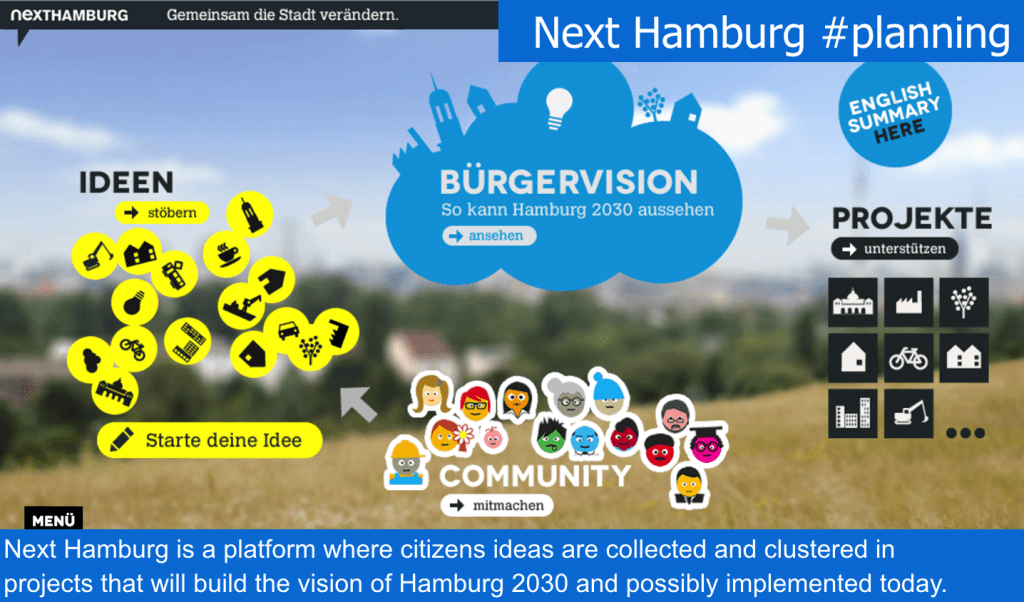 With today’s European cities hosting most of the continent’s population and urban areas being the stage for many of contemporary conflicts such as social inequality, environmental threats or economic crisis, collective action must be taken immediately. In the past years, there has been a lot of discussions about the potential role of smart technologies in addressing these problems. However, before investing towards grand projects we should make the most of tools already available in order to build a common understanding and aligned decision for the future. Social Media and similar technologies have this potential, as they are already available and regularly used on average by 68% of European population, but in most cases this happens outside of a dialogue with the public sphere. As public institutions face a multiplicity of challenges and they are forced to reduce public expenses and augment efficiency, their success increasingly depends on the extent to which they engage and mobilize their residents in meaningful cooperation. Inspired by the higher livability and sustainability of community-led developments and in contrast with the traditional top-down mechanisms of planning cities and providing services, public administrations are progressively looking into learning from local communities about their specific needs, incorporating bottom-up intelligence: citizens’ knowledge and insights as reliable data sources.

The digital shift has opened new opportunities for cities to create dialogue with their citizens, residents and users. However, many cities were hesitant to adapt their communication and participation mechanisms to this shift: they were often too slow and bureaucratic to engage with technologies that were already widely deployed in their communities. The impact of new digital tools extends well beyond the technological sphere: they transform the way cities are governed, urban projects are managed, services are delivered, and participation is orchestrated. Social media has the potential to bridge the gap between public administrations and citizens, municipal agencies and community groups, service providers and users. Adding an inclusionary dimension to the smart city paradigm, new communication platforms may foster cooperation and innovation within public administrations and outside: municipal operations may gain more visibility and legibility with the help of online platforms, while citizen feedback and user-generated data may support decision-making with the help of social media.

Fostering residents’ collaboration, promoting local commerce, tourism and an urban brand, or responding to emergencies are just some of the possible opportunities to test the power of social media as factors of interaction between local authorities and residents. Making apps and social media a decisive part of municipal collaborative strategy is not only relevant to make its action more efficient but also to create new jobs and opportunities for the local community of innovators. The example offered by the set of initiatives launched by Forum Virium Helsinki and Helsinki Region Infoshare is particularly useful to understand how the collaboration with developers and innovators can make new media a decisive part of local economy. The Crowdmap platform, developed by the Kenyan software company Ushahidi, helped enhance public response in situations as diverse as earthquakes in Haiti, military conflicts in Kenya or street violence in Mumbai. Hamburg’s Leerstandsmelder map highlights the importance and possibilities of vacant buildings. The Cu-Cu application developed by the London-based temporary use agency Meanwhile Space links property owners to social enterprises looking for space and help brokering mutually benefiting rental agreements for formerly vacant buildings. Costo, a new program by the Paris municipality’s mixed company Semaest brought together shopkeepers, residents and software developers to create applications through which proximity retail gains more visibility and can respond better to the needs of customers. Synathina, an online platform embraced by the Athens municipality, maps citizen initiatives that improve the quality of life of citizens and strengthen the city’s social net, and looks for administrative ways to remove the barriers they encounter and facilitate their activities. Next-Hamburg developed instead a city-wide platform where citizens could contribute, both online and offline, with ideas for the future development of the city, that were then further developed in partnership by the administration departments, local NGOs, research and private sector.

Inspired by these practices and many more, the URBACT Action Planning Network Interactive Cities builds on local needs and capacities to use social media and develop new tools for better urban collaborations. The cities involved in the Network look into the opportunities of using social media to improve the governance of urban spaces, resources and services. By launching new platforms, applications or channels to enhance communication between administration and citizens, the project aims at helping participating cities develop a local ecosystem of social media-based tools in order to better respond to challenges. Interactive Cities will compare strategies adopted by different European cities in the use of social media for institutional communication, as well as the use of open datasets for the creation of urban apps made by independent developers or by the public authorities themselves. Highlighting the city as a hub for creative exchange of contents and information among people is one of the main objectives of the project which will start from the strategies currently adopted by the Network’s partners in order to make them more efficient for the purposes they want to reach.

The City of Genova in Italy, leading the Network, set up more than a year ago its ‘Social Media Team‘, an operation group of representatives from various municipal departments. Besides the administration, the Team involves the Chamber of Commerce, Museums, the world-famous Aquarium and many other organizations. This cooperation helps the communication and promotion of Genova, transforming from an industrial city into service-oriented metropolis with a great tourism potential, often unrecognized even by its inhabitants. Similarly, Tartu in Estonia as well as Alba Iulia in Romania, are questioning how social media may improve tourism patterns. Also Liverpool, UK, is focusing on how to connect social media to the city promotion, but especially connected to supporting small local businesses, with the It’s Liverpool initiative. Lausanne in Switzerland, aims at improving the use of social media in respects to the e-democracy processes already in place with an extensive experience in decentralised web-content management. But the project will also explore how to connect real time communication between citizens and administrations to support an improved public transport and mobility service, as in the case of Murcia, Spain. At the same time, the use of social media, apps and digital platforms in case of emergencies, such as earthquakes or floods, will be one of the core priorities where possible collaboration with European branches of social media and ICT providers can be launched, in order to test innovative applications and solutions in the cities of the Network. In the meanwhile, European cities with experience in the use of social media in their municipal practices are invited to submit their candidature to be part of the Interactive Cities Network in the implementation phase.

Within the integrated methodology of Interactive Cities, each participating city will choose a set of priorities developed together with other administrations who face similar challenges. These priorities will be organized in clusters, and will define different ways to use the potentials of social media. Local strategies and actions will be developed in collaboration with the local groups of stakeholders, which will contribute to elaborate participative communication and common shared dialogue. The project methodology and practices will be also shared through dedicated social media channels, that will be used not only to document the partnership’s achievements, but also to demonstrate how cities around the world use these tools for the purposes studied by the project.

Social media will be considered a testing ground to apply innovative approaches along the project and to showcase positive examples and practices to the URBACT community and beyond. Interactive Cities aims at becoming a recognized and reliable point of reference on the topic at the European and global level, providing support to knowledge transfer and to the creation of a global community of experts and practitioners. The project will involve a variety of European networks, such as Eurocities, and ICT providers to foster exchange from different perspectives. Interactive Cities looks beyond the scope of the Action Planning Network: we conceive it as  the first step towards a permanent forum of dialogue and discussion on the relation between new media and the city.