By working at a small scale, a digital platform helps neighbourhoods to strengthen social cohesion at many different levels: promoting local businesses, cooperation between neighbours and thus enhancing citizen participation. FragNebenan represents a smart way of using social networks to form a better social life within our cities both on- and offline.

“To keep neighbourhoods alive and to promote diversity in our cities, this is what we believe in”

What prompted your initial research into the social life of neighbourhoods?

(Stefan) It all started at a time when I was living in a building with 25 flats and I hadn’t managed to get to know anyone in months. Over time it began to feel quite strange, because when alone you miss out on so many opportunities. First of all, as a solution I had thought about sharing (lending and borrowing) stuff such as tools, but then I thought it might be possible to do something more. So I started thinking about how to really connect up with people, how to bring about interaction with neighbours through exchanging information. As a starting point to create a community – this was the core idea: to really know who lives next door to you and ultimately to build social resilience for the better use of resources.

(Mirjam) In big cities, like Vienna, there are a lot of people who move in and can be quite lonely: people who have to figure out a lot of stuff by themselves and would need some support from the people around them. FragNebenan was born in the times when sharing economy was upcoming, so these thoughts about cooperation, working together and sharing resources were very present in the mindset of a lot of young people.

We started thinking about how people could become connected, how people would actually be able to help each other, figuring out a lot of possibilities: take for example a young mother with kids who is new in a neighbourhood and wants to meet other young mothers so they can help each other out with babysitting; dealing with pets – I’m going away for holidays and my cat will stay home, can someone take care of it?; facing problems – I’m sick, can somebody go to the grocery and buy something for me? These are the kinds of things we are addressing on FragNebenan. Social empowerment and resilience are two cornerstones.

FragNebenan wants to support neighbourhoods so that they become lively places where people are connected and where people know each other. Of course to be able to do this there are a lot of underlying questions that need figuring out: what constitutes a neighbourhood? How do you define the parameters of a neighbourhood? Which people does it affect? We started with the concept of a concentric circle with a radius of 750m: we wanted to connect people who physically live close to each other.

How did you start up FragNebenan?

(S.)At the beginning I thought about connecting up people living in the same housing blocks and what could be the right tool for this goal. At the same time, I was looking for team members that could join me in this project mostly because I don’t have any technical background, so the first step was to find someone who could code. After a few months I also met the urban designer Andi, who had already published on how to activate neighbours and neighbourhoods and who then joined me so as to be involved in a project like this. Soon we were four and decided to start the project together so we formed an association. We had always wanted to set up a company, but since our project centres on social network, we needed some time before actually monetising, first we needed an active community who were using our service.

I could work full time on the project and the others could work part time, at first we launched a prototype of the platform in May 2014. It took us 6 months to launch the platform from our first meeting. Back then we were only working in a couple of districts of Vienna, however, we launched the platform for the whole city of Vienna in January 2015. Then, in March 2015, we got a grant from the state: 50.000 euros which we invested in the further development of the prototype.

In the meanwhile, we were contacted by some investors, a business agency whose focus is on social impact, who agreed to finance us once we had reached 2.000 users. This is how it started, when we reached 2.000 users, we could set up FragNebenan as a company. We did this with the support of only one investor, because otherwise it would have been too expensive for us at the beginning. FragNebenan is free for neighbours while local authorities have to pay a monthly fee. The other main revenues come from local businesses, mainly because for them there is the potential of obtaining more local customers.

How do you work with local services?

(M.) In my opinion, a good neighbourhood is where the services are more than available: the opposite situation of some American cities where you can live in a place with not a single food shop around, because they are all outside the city in massive malls. For this reason, one of the missions for FragNebenan is to incorporate small businesses. Of course for small businesses this is also a better way of targeting people who live near them. Think about your local pub that can immediately say to its local customers: hey I have this lunch offer! Tonight is pop quiz! Or a local bookstore saying: we have a reading tonight!
We are still developing this aspect of our platform, but it is important for us as we can then start monetizing from promotion via local businesses.

Another thing we are doing is bringing services to people living in the same building when they need a special kind of worker: a plumber for example can visit more than one apartment in the same building and consequently, the transportation costs only need to be paid once. This is a second pillar for us: to optimise local services related with your neighbourhood. We want to be sure that the ideas we make money from are relevant for our neighbours, offering people something really useful for where they live. Maybe you don’t need a plumber at the moment but you’ll need one in the future. We don’t want to be like those social networks where people keep getting random ads that have nothing to do with their life. Another pillar for us is to never sell data to other companies, we don’t want this to ever happen.

We work a lot with opinions from our users: we already have a list of recommended butchers and other local stores that need to be more connected up with local people. It is still in development, but a lot of work has already been accomplished. We know we are certainly not the only platform dealing with this concept i.e. how to make revenue by offering a valuable service to a neighbourhood, but for sure we are the only one in Vienna. 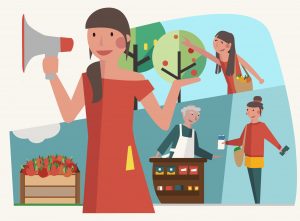 Can FragNebenan be used as a participation tool?

(S.) We want to be the infrastructure for every neighbourhood so we are already working with some local districts. A special profile is offered on our platform to local district offices so they can get in touch with residents in their area. We hope one day FragNebenan will be an official communication tool for Vienna.

(M.) Some districts are more interested than others, because what we offer is a communication tool to directly talk to their neighbourhoods and to people they are working for. We have a few districts that are on our platform and a few other local semi-governmental players. One district that is working with us on a permanent basis is the 6th, its local chairman (Bezirksvorsteher) is actively communicating with neighbourhoods in the district. For example: there were some works to be carried out on the metro line and before it happened, everyone received an update about what was about to happen, giving information about some alternative routes, apologising for the inconvenience and giving people the opportunity to voice whether they wanted to be more informed. It worked perfectly. People were really happy to be informed this way, they felt that they were being prioritised. This chairman is also monitoring what is going on in the district in the form of a forum, he is very young and this helps because he can really see the potential of our platform. The 6th district is really making an effort to make it work and really taking care of its neighbourhoods.

How are you improving the platform as you are working with other Austrian cities?

(M.) FragNebenan is now present in almost every big Austrian city: Linz, Graz, Klagenfurt, Innsbruck and Salzburg. As soon as you want to address local entrepreneurs or local governments, it is better to be present in every city, but as it is relatively easy to travel around this country, we decided on being Vienna-focused because this city is a good playground to test out new things and improve. Our biggest community exists here: out of our 60.000 users 50.000 of them are in Vienna.

Our company is small and we want to focus on what we have done/are doing to improve the quality and content of our services, and thus build a stable online community. Every time you send out a new commercial or some form of message you can get some new users, but it is hard to make our platform part of these new users’ daily life. People usually mean to check the website regularly, but they rarely do. We are trying to avoid this by keeping people in contact. Compared to other platforms, we have a real active community, really connected to the platform without their even realising it.

To keep our community alive we are dealing with community management both online and offline. Usually to keep an online community really going you need quite a lot of people because there is only 1% who will actually initiate interaction or write a question, pretty much everybody else is just reading. In order to motivate this 1% and everyone else to participate, we need to start more online actions: every 2 weeks I send out a questionnaire to the community in order to get people talking, discussing and suggesting things to each other. It once happened that some people had gone to some shops suggested in a online discussion and these same people were so impressed because they had not known about the existence of these shops in their neighbourhood. Therefore, in this case we felt that we had really helped people to get to know their neighbours and their local shops and avoiding going to the big malls. We have invested in small shops so as to keep neighbourhoods alive and to promote diversity in our cities, this is what we believe in.