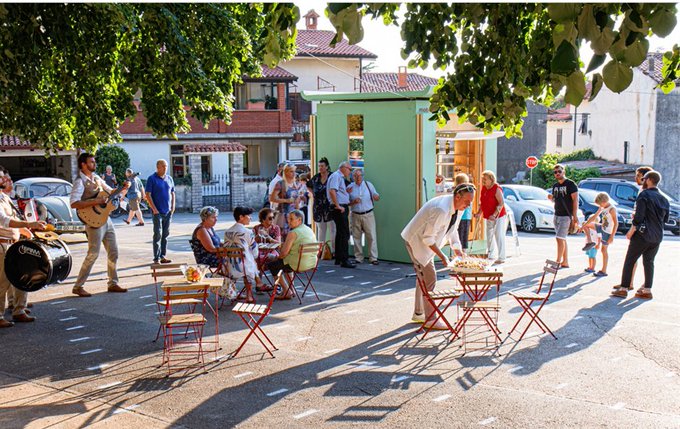 Eutropian collaborated with the URBACT III network focusing on sustainable mobility as engine for social and economic cohesion of local communities. An overview on the integrated plans and pilot actions developed by nine cities involved in the network.

Streets and squares of our cities play a key role in making our urban experience more enjoyable, creating the conditions for economic growth, social interaction and sustainable mobility.

The cities involved in the URBACT network Thriving Streets developed original plans and actions with their local communities which can inspire other urban contexts around Europe to act on the interaction between mobility and other spatial policies with a direct impact on creating more resilient and attractive cities.

In the following stories you can find how the cities of Thriving Streets tackled the most urgent challenges on urban mobility and public space and what they are planning for the future.

Antwerp and the action on the Deurne district

Antwerp’s district of Deurne has suffered for a long period the lack of a distinct centre, with the decline of the retail sector, the dominance of cars and the absence of public spaces for the local youth and pedestrians.

The city intervened at the intersection between Frank Craeybeckxlaan and Te Couwelaarlei streets creating three pop-up squares and the introduction of 30 km/h speed limit, transforming this new public space into the heart of the district. This action was the result of an intense dialogue with local retailers and residents, who gave useful inputs for the transformation of the public space.

On the medium and long-term, Antwerp aims to reinforce the local retail cluster, fostering the concentration of more shops in the district, and in implementing innovative street designs solutions to increase the rate of public space available and the off-street parking offer.

Debrecen and its plan for healthy and green spaces for all

The second largest city of Hungary is committed to completing the regeneration of its downtown area, characterised by the presence of an excessive amount of cars and by few public spaces available for the residents.

Debrecen tested a temporary closure of the main street from car traffic in a special Car-free day, during which many parking lots were converted into temporary green spaces: this new green oasis was strongly appreciated by the residents, offering a glimpse into the future of the street.

The integrated plan developed in collaboration with residents and stakeholders aims to make the city centre more vibrant through the creation of a new public park for community activities and encouraging active mobility and the use of bikes. Inspired by the principle of the 15-minutes city, Debrecen wants to reduce the use of cars as a way for improving quality of life and public spaces for all.

Igoumenitsa and its action for enhancing the use of public spaces

90% of households of the coastal Greek city owns a car: urban space is designed for cars more than for pedestrians, while cycling network is still limited and fragmented.

In order to contrast this trend, Igoumenitsa installed a parklet on a couple of parking spaces in front of the municipal schools, sparkling the debate on alternative ways to use the public space.

Making streets more attractive for different types of users is the objective of the action plan developed in collaboration with the local community, which is mainly focused on the creation of new green areas and bike paths, but also on the installation of ramps to help people with disabilities and the organisation of a programme of sport activities to enable citizens to reclaim public spaces.

Klaipeda and its strategy for reviving the Old Town

The third largest city of Lithuania accounting for around 10% of the national GDP needed a strong revival of its city centre, heavily polluted due to the presence of offices and business activities but scarcely populated by residents, who prefer to populate malls and indoor spaces, and not accessible for persons with disabilities.

The organisation of a series of events, such as cinema night or concerts, was the ideal ground for testing how a street closure model for small events could work in Klaipeda, if well combined with an action of promotion and active involvement of the Old Town businesses.

Rebuilding trust with the local community is the first step for making the Old Town more vibrant all the year long, with the organisation of events and the installation of new infrastructures to improve sustainability and accessibility, which are the main points of the action plan to be implemented on medium and long term.

Nova Gorica and its plan for reviving Solkan

Fostering the connection between peripheral neighbourhoods and the modern city centre, reconstructed after the 2nd World War, is the main challenge of the city placed on the border between Slovenia and Italy. The Solkan district is the oldest part of the urban area but is characterised by unpleasant public spaces, lack of services for residents and degraded or vacant buildings.

The temporary rearrangement of parking spaces in one of the squares of Solkan created a new, high-quality public space for the residents. The installation of a small green kiosk in the square eased the organisation of public events of different kind, fostering the community spirit and the sense of ownership of the public space.

The consolidation of this programme of activities for reviving the public spaces of the Solkan area is the main point of an integrated urban plan, that aims to improve the sustainable connection with the rest of the city through the creation of bike lanes, but also to promote the renovation of heritage buildings, which may become potential attractions and venues for cultural events in the future.

Oradea and its strategy for encouraging walking

In recent years Oradea made huge investments in reviving public spaces and mobility infrastructure, but the abundance of parking places in the city centre is still encouraging residents to move by car. At the same time, the information included in the streets signposts are often not visible and don’t encourage people to considerate alternative modes of transport.

The temporary closure of the main square to car traffic gave the opportunity to the residents to regain access to the public space, increasing at the same time the business opportunities for shops and commercial activities of the city centre.

The reduction of on-street parking slots and the installation of new streets signposts to invite residents and tourists to discover the city by walking are part of a strategy that Oradea is going to implement on medium and long term to improve walkability and incentivise the reduction of car use by the residents.

Parma and its scheme for restoring the charm of Oltretorrente

Lead partner of Thriving Streets, Parma has designed several policies to promote the transition to climate neutrality, such as the Sustainable Urban Mobility Plan and the Sustainable Energy Action Plan. However, the road to reducing congestion and air traffic is still full of challenges, particularly in areas such as Oltretorrente where public spaces need to be revived and active mobility infrastructure needs to be improved.

Animated by the objective of making this area of the city an open laboratory for sustainable solutions in terms of urban mobility, Parma launched a survey to assess the accessibility and effectiveness of the public transport in the area but also a gamification activity for primary school kids, who tested different mobility options to go from home to school.

The promotion of Oltretorrente area as a potential tourism destination is the long-term objective of Parma, starting from actions of placemaking incentivising the creative use of public spaces as a way to reinforce the sense of cohesion among the inhabitants.

Santo Tirso and its plan for promoting more street life

Car dependency is growing in Santo Tirso, with increasing traffic and unauthorised parking in public spaces, but also due to the lack of decent infrastructure for cycling and walking. Improving the perception of the public space by the residents is critical in reviving the local economy and also the retail sector of the city located in the metropolitan area of Porto.

The organisation of an open street event gave the opportunity to test different approaches in the pedestrian zone, showing the potential in terms of attractiveness of the city centre with the organisation of a series of events and public activities.

Increasing the modal share of walking and cycling in school trips and decreasing car dependency are some of the long-term objectives that Santo Tirso aims to reach acting on different dimensions of the public space, also with the active involvement of the retail and cultural sectors.

The redevelopment of Lower Road is the major project ongoing on in this London’s borough, characterised by the diversity of its social tissue and the rapid growth of its population. However, the area is still much car-oriented and not pedestrian-friendly, with narrow sidewalks and lack of playing infrastructure for kids and youth.

The engagement of the local community through a series of events on the public space, from acoustic concerts to chalk drawing and free bike maintenance, sparked the conversation with different categories of residents showing that an alternative way of living the public spaces is possible.

Improving the attractiveness of the area through the active involvement of business activities and residents is the objective that Southwark aims at reaching through a mix of interventions on the road design and on the surrounding environment.