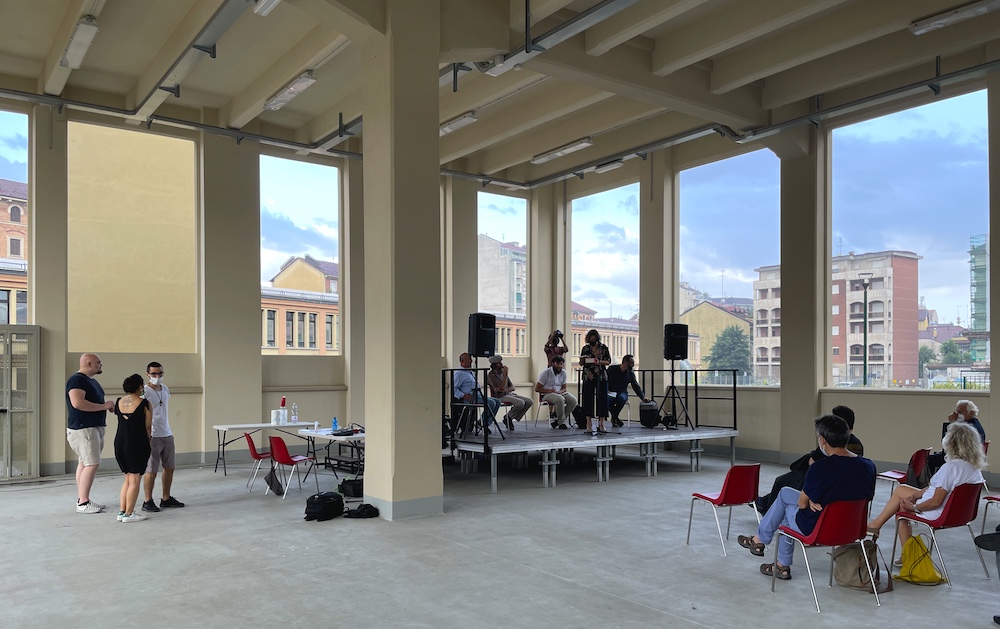 A Pact of collaboration is a negotiation between the city administration and civil subjects through which the regeneration, care and co–management of urban commons is defined and carried out. Since 2016, the Turin Municipality has signed over 60 Pacts of collaboration, supported by the municipality’s “Tavolo Tecnico” (Technical Board) that acts as a forum to bring together different departments of the Municipality around urban commons proposals and their evaluation. At a meeting of the URBACT network CO4CITIES, we spoke with Giovanni Ferrero and Tiziana Eliantonio of the Turin Municipality’s Operational Unit for Periphery, Urban Regeneration and Urban Commons to explore the work of the Tavolo Tecnico.

What are the components of the Tavolo Tecnico and what are its functions?

Giovanni Ferrero: The Tavolo Tecnico is a form of cooperation between different sectors of the Turin Municipality, supporting the creation of Pacts of collaboration. It was formally established with an act of the General Secretary, who is the Chief of all the administrative technical structures of the city of Turin. We began to experiment with it in 2017 during the Urban Innovative Actions-funded Co-City project that implemented the city’s Regulation on the Urban Commons in the form of Pacts of collaboration. The Tavolo Tecnico is coordinated by the Head of the Periphery, Urban Regeneration and Urban Commons Division and it consists of different representatives of sectoral departments of the city administration including those in charge of green areas, social services, real estate management, as well as representatives from the local districts of the city of Turin and additional officers from other departments who have expertise in particular fields, depending on the needs of each project. Every month we have a session in which new proposals are examined and evaluated, but we also try to monitor how the different Pacts in the implementation phase are working and we discuss any kind of practical and critical issues emerging from the co-design phase or from the management phase of every different Pact. Briefly, I would say that the Tavolo Tecnico has an open, consultative and supportive role regarding all that is happening around Pacts of collaboration and urban commons in general.

What are the steps that lead to the creation of a pact of collaboration?

Giovanni Ferrero: The three most important phases of the Pact of collaboration are the proposal, the co-design, and the implementation phase. Any civil subject (formal organisation or informal group of people) can introduce a project proposal to the municipality’s Urban Commons Office, identifying and describing the urban common in question, the planned activities and the composition of the proponents’ group. The Technical Board composed by the relevant city officers will then assess each project proposal by determining its consistency with the principles of the Regulation on Urban Commons, and its technical feasibility.

If the proposal is approved, the co-design phase can begin. It is the participatory phase in which the Pact’s content, terms, duration as well as the model of governance are discussed and agreed upon. This phase has a variable duration according to the complexity of the project: in our current experience, it can take from a few weeks to many months. When all the parties have come to an agreement on the final version of the Pact, this can be finally signed by the appointed City Director and one representative for each association/informal group, that is democratically chosen by the proponents.

Can you give us some practical examples of how a proposal reaches the Tavolo Tecnico and is later put in place?

Tiziana Eliantonio: One good example of how an Urban Common was identified, enhanced and maintained is Orti in Piazza (“Vegetable gardens in the square”), located in Risorgimento square, in district 4. During the summer of 2016, this became the first “smart square” of the city. Within the framework of the Torino Living Lab project, which was meant to find innovative solutions for the reuse of public spaces, the square was renovated, green areas were enhanced, a public wi-fi network was established and a considerable portion of the square was used for the creation of vegetable gardens with an automatic irrigation system that were managed by a group of active citizens. An outdoor gym that produced energy by the effort of the users of electric sports vehicles and bicycles, was also set up, complete with charging stations. Last but not least, a bookcrossing booth and a petanque field complemented the regeneration of the square, which began to be lived again by citizens of all ages.

At the end of the experimentation, the square started to fall again in a state of diffused negligence, so an informal group of citizens asked to keep the vegetable gardens by drawing up a proposal and presenting it to district 4. Through the mediation of the Tavolo Tecnico, this initial group of people also involved the citizens who took care of the other activities. A complex co-design phase involving more than forty people began. At the end of this phase they succeeded in creating a joint, integrated proposal. The Pact of collaboration was signed in 2019 for a duration of three years. In 2020, when we completed the monitoring activity over this Pact we observed that the square was still vital and the citizens were motivated and involved despite the pandemic. The peculiarity of this Pact is that the civic entity here is an informal group: they didn’t want to form an association but they were able to democratically appoint a representative who actively followed all the steps and activities.

Another example is Cumiana 15. What used to be a disused industrial site that belonged to the former Lancia automotive group is now a multifunctional space, a covered square open to everyone, where socio-cultural, recreational and sporting activities are carried out. The regeneration of this space was stimulated by the public call for proposals issued by the municipality in the framework of the Co-City project, and the city identified this building as one of the areas of intervention. The civic entity that was formed to oversee the use of this space is a group of associations, while the city is represented by the administrative district 3 and by our urban regeneration office. The proposal foresaw the total renovation of the building and it was the main investment in works and infrastructures in the Co-City project.

The co-design phase defined all necessary technical and administrative aspects for the physical renovation of the building, and this is a very important factor because it was not priorly defined but it was a common, cooperative decision in the co-design phase. All interventions and works had been done during 2019, but with the official end of the Co-City project in February 2020 and the first wave of Covid-19 dominating the municipal agenda for much of the spring and summer of 2020, the inauguration of Cumiana 15 only took place on 15 September 2020.

The peculiarity of this Pact is its governance: it foresees a steering committee composed by members of the city council, the administrative district 3 and the associations, meeting at least every six months. They have an operational staff which meets weekly and takes care of the logistic coordination for all activities, assuring the daily operation of the site.

Every Pact of collaboration needs follow-up: this task is carried out by our office together with the signers of the Pact, both from the city administration and the local communities. During this process we observe all the ongoing processes and take note of all weaknesses. In the recent years, most issues were related to how Covid-19 had affected the Pacts.

Do Pacts include a safety plan to reduce risks and define responsibilities?

Giovanni Ferrero: All parties have to sign a document about risk prevention, describing the general risks of the area, the specific risks of the activities that are carried out and the useful actions to be taken to mitigate risk of damage to people or the property. A citizen who does some maintenance, or decoration work cannot be treated as a municipal employee, and the city is not responsible for what that individual is doing. On the other hand, associations have their own responsibility and tasks to fulfil. The law establishing rules for the safety of workers in industrial settings is the same law that associations have to follow. This implies that the persons responsible for any of the proposed activities are at the same time liable for damages should something go wrong. The city of Turin has a specific insurance that covers problems that can occur in very different fields including the Pacts of collaboration, yet liability remains an open and complicated Italian issue that the city of Turin alone cannot solve.

Is there public funding attached to all Pacts of collaboration?

Giovanni Ferrero: Pacts of collaboration do not provide money, yet the city has the possibility to perform construction or renovation works and to buy the necessary equipment for the activities of a pact of collaboration. For instance, as Tiziana previously mentioned, all works for the renovation of Cumiana 15 were financed and done by the city. On the other hand, citizens and organisations can collect resources via participation in public calls and crowdfunding activities.

What other support do the communities signing Pacts of collaboration receive?

Tiziana Eliantonio: Besides the technical and administrative support provided to them, in order to further support the activities foreseen in the Pacts of collaboration, a part of the investment for equipment has been allocated for the creation of the Attrezzoteca, a shared Library of Tools (LoT) which allows a free loan of gear and tools for the care of green areas or for the production of cultural activities in public areas. The Attrezzoteca is managed by four neighbourhood houses in different locations all over the city.