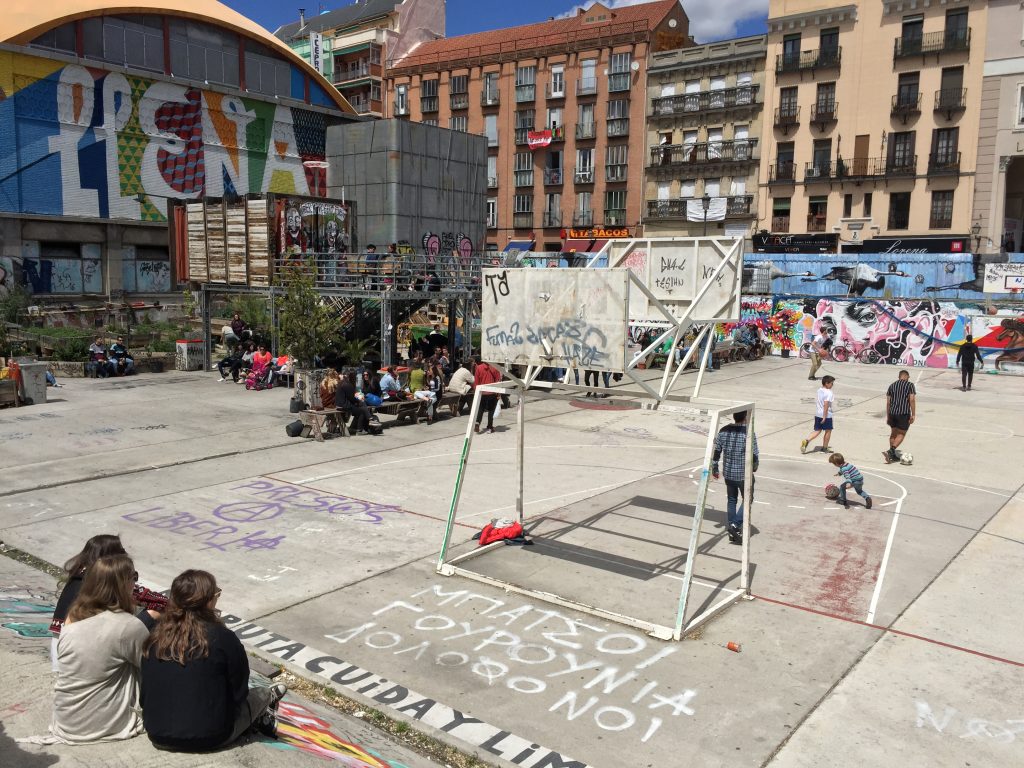 Article by Levente Polyak for publicspace.org, a project by the CCCB.

In 1748, the Italian architect Giambattista Nolli published an ichnographic plan of Rome, documenting every building in the city and their adjacent spaces. The Pianta Grande di Roma, besides outlining all the buildings, and separating them from the surrounding public spaces, also depicted publicly accessible spaces inside buildings, as parts of the public realm. For many of us, these in-between spaces, consisting of courts, inner gardens or front yards, have become the principal settings of public life in 2020.

Over the past few decades, good quality public spaces and placemaking have been high on the agenda of cities in Europe and many other parts of the world. (2)

They were eventually accepted as key components of the most advanced urban environments, in terms of high-quality services, sustainable transportation and cultural diversity. If urban development, since the late 20th century, has been hijacked by finance, the design of public spaces was often complicit: many new public spaces were built in order to drive up the value of urban real estate and let property owners and investors capture the value created by these spaces.

However, the COVID-19 pandemic and the consequent lockdown measures have brought about an exodus from urban areas, proving that the mere existence of public spaces does not generate equity. As with private gardens in the countryside, semi-public spaces in cities, including courts, inner gardens or front yards, like the ones rendered by Nolli, have become vital for locked-down individuals and families trying to survive the long spring months. We rediscovered those public spaces (of various degrees of publicness) are crucial resources for our wellbeing.

While unequal access to open and green spaces has defined people’s experience of the COVID-19 lockdown, solidarity movements helped mitigate the negative effects of isolation. Spaces that were no longer open for public use, because of the restrictions, became venues to distribute food, medicine and other goods for those in need. The lockdown was also thus a lesson in solidarity and sharing spaces and resources. After the experiences of 2020, therefore, it is now more necessary than ever to rethink the future of urban public spaces.

In order to mitigate the effects of lockdowns, and counter the ever-growing trend towards enclosure, segregation and commercialisation in our cities, future public spaces will have to correspond to various degrees of complementarity, privacy, proximity, interconnectedness, and embeddedness.

One of the key objectives of public spaces is, in theory, to be open to all. They should enable different social groups to coexist and learn about others. However, given that the highest quality public spaces are often located in better-off neighbourhoods, or are more welcoming to more dominant activities or individuals, this universal access comes at the expense of the more disadvantaged or vulnerable groups. Furthermore, despite all the attention invested in designating new areas for public use, public spaces conceived for a universal public might not always cater for the diversity of needs of even the same group or individual. For instance, a family has complex needs at a playground: while kids play and run around, parents might want to withdraw to a somewhat quieter part of the playground and use the time to chat with each other or read, while still having a complete overview of the space and their children.

For some, public space is about exposure and exchange, while for others it’s about retreat and withdrawal. What’s the best way to design spaces that are simultaneously agoras and refuges? How can we come up with places for both sociability and solitary contemplation?

Creating public spaces becomes further complicated when they address different members of a group or different groups in general. Public spaces should embrace diversity: they should accommodate those who want to play and socialise, as well as those who want to immerse themselves in a book or newspaper, or simply observe the surroundings. These kinds of activities should be possible without mutual disturbance: they ought to complement each other, with no need for any drastic separation. They should offer space for activities as diverse as boxing and dancing, like in Copenhagen’s Superkilen, or for planting vegetables and flying kites, like in Berlin’s Tempelhofer Feld. They should be open, safe and entertaining for those who want to show themselves to the world, and also for those who prefer to remain as invisible as possible. They should incorporate different degrees of exposure and involvement, somehow combining a stage and a back row seat in a theatre.

Public spaces might also need to provide different degrees of access for different groups. In specific cases, the safety or comfort of a group of children or women, for instance, depends on restricted access. If there are to be additional public spaces that provide universal relevance and access, these must include intimate spaces to bring together members of a specific social group or locality, in places that are extensions of their domestic spaces, especially where space at home is scarce and overused. Community gardens, rooftops, social centres, women’s orchards or recreation areas are outside of the traditional arenas of public provision, and the people take an active role in maintaining these public spaces, by helping with the vegetation, buildings or infrastructure. Such “semi-private public spaces” include public institutions whose official use can be complemented by more informal uses, like the schoolyards in Oslo’s Groenland district being opened for students in the afternoons too; (3) or East Brighton’s public parks being opened privately, to families, one at a time, who suffer from a lack of space. (4)

These semi-public spaces also play an important role at times of crisis: during the COVID-19 lockdowns, many city dwellers with restricted movement did recognise that the public spaces not in their direct vicinity were no longer public assets for them, and they thus began to explore their “domestic public spaces”.

In a city of limited mobility, proximity has a newly re-acquired value. As opposed to the large distances and homogeneity of the modernist concept of city life and development, the notions of the “15-minute city” or the “city of short distances” introduce a new sense of hierarchy and gradualness not only in the planning of mobility and other services, but also in the conception of public spaces. The COVID-19 lockdowns proved that the idea of a 15-minute city is sound: many city dwellers, limited in their movement or deliberately avoiding public transportation, were confined to their immediate neighbourhood, leading them to discover new green spots for walking around or new nooks and crannies to sit in, which were hitherto invisible to them. While all our cities need their Central Park, Villa Borghese or Bois de Boulogne, they also need local public spaces that cater for a neighbourhood and are “on the way” to the next scheduled task of the day, allowing visitors to sit down with a coffee in the morning, with a sandwich at noon or with a book in the evening. These public spaces of proximity should closely interact with local services and institutions like kindergartens, libraries, theatres, leisure centres or co-working spaces.

Public spaces are not a realm separate from the rest of the city. They are part of an interconnected set of infrastructures that are, to varying degrees, exposed to the forces of nature and make active use of them. Due to their many different connections with urban nature, public spaces help the city generate energy, compost green waste, absorb water and capture CO2. Often disguised as a set of objects designed following aesthetic rules, public spaces are also exhibits where the city’s environmental mechanisms are on display, like in Rotterdam’s Waterplein Benthemplein.

Public spaces and parks are where natural variety can be embraced: if Berlin’s Prinzessinengarten offers you more potato varieties than any supermarket in town, that’s because monoculture farming in the countryside paradoxically turned cities into the ultimate refuges of biodiversity. Public spaces are also the immediate interfaces where we, to different extents, “encounter” the weather, and we expect these spaces to protect us from it. If insidiously designed Privately Owned Public Spaces in New York could use sun, wind and water to keep away potential users, why could we not use the force of design to make extreme temperatures more bearable, as in Vienna’s Cool Streets, or more fun, as in Helsinki’s Bright Swing?

Besides their connection with the city’s natural processes, public spaces are also, to different extents, embedded in the city’s economic tissue. Public spaces, parks and squares tend to push up the value of the surrounding properties and provide many businesses with free outdoor space. In turn, the neighbouring buildings keep their “eyes on the street”, through windows and ground floors, thus helping public spaces stay safe. And it is through the adjacent plinths, the ground floors of the neighbourhood, that a public space can garner sufficient economic capacity to be maintained, nurtured, developed. With their great variety of connections to the city’s economic flows, public spaces need to stand firm: while they can produce revenue by hosting economic activities, ranging from markets and cafés to gardening or composting, they have to be able to provide consumption-free spaces for their residents by making right use of the economic forces of their neighbourhoods, while also nourishing their local economic tissue. In this sense, we can think about inclusive public spaces as corresponding to the principles of social economy. A careful design of the economic circuits around public spaces needs to be conscious of their exposures to extractive economic dynamics: it has to create room for the more vulnerable economic actors that cater to more vulnerable communities. Also, it should strive to ensure that the values created in and by public spaces are reinvested into our public realm.

The diversity of public spaces, their different degrees of complementarity, privacy, proximity, interconnectedness and embeddedness are also reflected in how these spaces are governed.

While most of our public spaces are dominated by a single public authority or private business, with their respective codes of conduct, in the gaps of public and private control of space a new genre of public spaces was born.

These spaces, also called as the commons, are characterised by a multitude of efforts, thoughts and gestures invested in their daily operations, and their sets of rules are co-designed and constantly re-negotiated by their communities. If you could play sports or listen to free concerts at Madrid’s Campo de Cebada without disturbing others, it was because of the self-organising capacities of the neighbours’ associations. If today you can enjoy the sight of the Lago Bullicante, Rome’s largest natural lake in the middle of a park, it is because of the neighbourhood committee’s dedicated work to protect the site and make it accessible for everyone.

The significance of such modalities of self-organisation goes beyond self-organised spaces themselves. The constantly re-arranged interactions of self-organised initiatives reflect the diversity of uses, degrees of intimacy and publicness, proximity, natural interactions and economic interdependence that a public space can nurture. Future public spaces have a lot to learn from these arrangements: the heterogeneity of relationships that a public space, in reality, can have with its users, its natural environment and economic context, may also be instructive with regards to its maintenance, cultivation and development. While public spaces, by default, should offer universal access to all, we also need spaces that are co-governed and co-managed by a multitude of users in such a way that guarantees physical and mental room for those more vulnerable people, groups, species or activities.

(1) With contributions by Bahanur Nasya and Giovanni Pagano.

(2) See, for instance, the work of the Placemaking Europe network: https://placemaking-europe.eu.

This article originally appeared in publicspace.org, a project by the Centre of Contemporary Culture of Barcelona. https://www.publicspace.org/multimedia/-/post/gradual-space-rome-for-diversity-in-the-future-of-urban-public-spaces