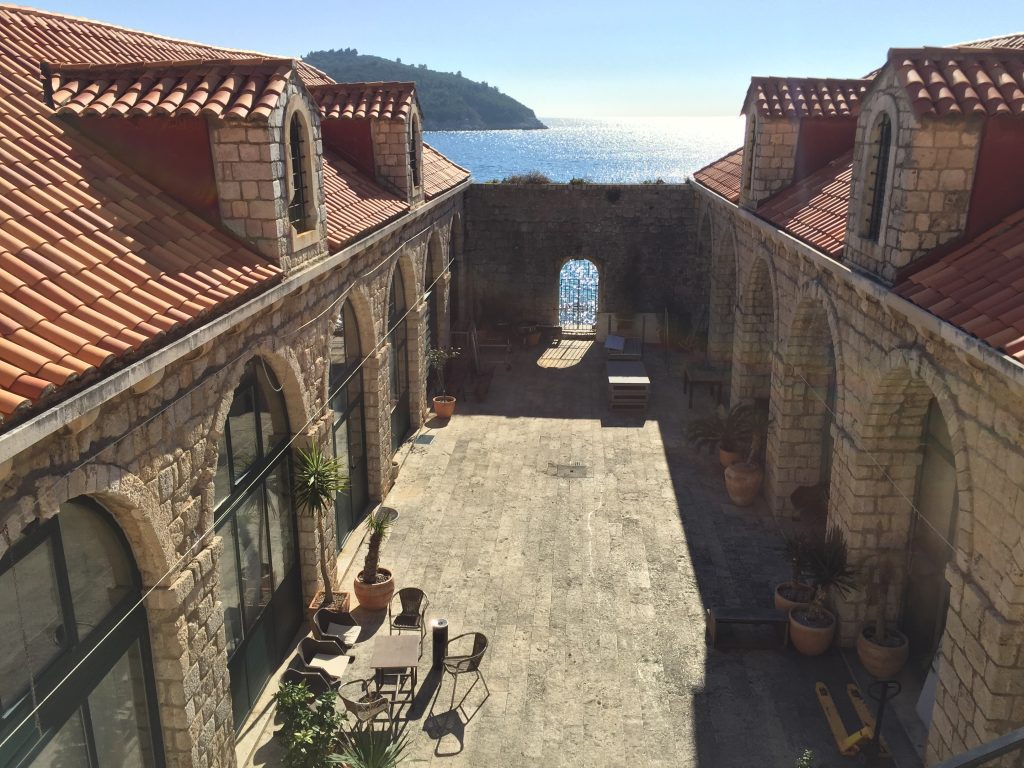 In the year 2000, the Art Workshop Lazareti, one of the most significant Croatian organisations in the field of contemporary arts and culture, signed a long-term contract with the City of Dubrovnik. This contract, with a duration of 25 years, allowed the organisation to use three of the ten buildings of the Lazareti heritage complex located some 300 meters from the Old Town of Dubrovnik. As such, it was the first example of a long-term lease contract made between the public administration and an NGO in Croatia. It was also a significant push to Art Workshop Lazareti’s organisational development and further plans to transform the complex into a social-cultural centre.

The Lazareti heritage complex was built in the 17th century as a quarantine station and it consists of ten interconnected buildings. During the 19th and 20th centuries, it also served various purposes (warehouse, market, military barracks, etc.). Because of its proximity to the Old Town of Dubrovnik, since the 1930s onwards it was also in the focus of heated discussions expressing ideas ranging from different visions of renovation for tourism purposes to ideas of demolition to build a new hotel in its place. However, from the 1980s till today its function is primarily that of a cultural centre.

“The Quarantine project was an integral part of the contract which the Art Workshop Lazareti signed with the City of Dubrovnik. To sign the contract, it was necessary to develop or visualise how the spaces would be used sustainably. Lazareti was envisioned as a public space, socio-cultural and educational centre and the users of the space, NGOs were defined as equal partners and actors. Through this vision and idea of the Quarantine project, the entire complex would gain a stronger social component in connecting with the local community. It should be noted that the project planned in detail the programs in the spaces entrusted to AWL by the contract, and the idea of the Lazareti as a social and artistic centre was a developmental vision for the whole complex.”

After presenting the project, the City of Dubrovnik signed the long-term contract with the Art Workshop Lazareti which enabled them to apply for the World Monuments Fund’s open call to renovate endangered heritage sites. At that point, the Lazareti buildings were heavily affected by both the consequences of the Homeland War happening at the beginning of the 1990s and by decades of disinvestment. Art Workshop Lazareti received the funds in 2002 and they were used to renovate the roofs as well as a part of the interior.

However, the initial success of the first renovation has been overshadowed by the strong emphasis on commodification and commercialisation of the public spaces and heritage sites in Dubrovnik, due to the growing monoculture of tourism which started in the early 2000s. Even to this day, the concept remains the same: culture is thought mostly through the frame of heritage and heritage is considered as a vessel for profit. The persistence of this concept regularly revived the heated debates coming from the City of Dubrovnik whether such a valuable site should be given to non-profit organisations.

For the NGOs residing in Lazareti, this increasing pressure from the municipality and the tourism market served as an incentive to start their joint advocacy efforts in 2012, just before the City of Dubrovnik began the second renovation of the site. Srdjana Cvijetić recalls:

“The Platform for Lazareti started collaborating in 2012 when scaffolding was placed on our doors without any prior notice and we were denied access to the premises. Through our efforts, a presentation of this newest project of Lazareti renovation was organised and it was clear that the NGOs need to be included in the future renovated spaces. The Platform, therefore, was not created in ‘peacetime’ conditions to integrate programs or organisational capacities, but at a time when we had to work together to ensure that our contract was honoured and that we could stay in Lazareti.”

Even though their start as a platform was rough, member organisations of the Platform for Lazareti have successfully continued their collaboration since 2013. Today they are an unofficial advocacy association consisting of five NGOs residing and/or working in Lazareti (NGO Deša, Student Theatre Lero, Audiovisual Center Dubrovnik, NGO Luža and Art Workshop Lazareti), dedicated to developing the idea of Lazareti as a horizontally integrated social-cultural centre open to the local community. They have continued influencing local and national cultural policies and working on strengthening the civil scene in Dubrovnik. Their vision of the Lazareti as a social-cultural centre has been implemented in local policy documents such as the “Management Plan for the Lazareti Monument Complex 2016-2020” and “Dubrovnik Culture Strategy 2015-2025”.

In 2018, the Platform for Lazareti, in collaboration with the City of Dubrovnik and Dubrovnik Summer Festival, applied for the “Culture in Centre” programme co-funded by the European Social Funds. The granted proposal envisioned to continue developing Lazareti as a social-cultural centre based on public-civil partnership and participatory governance. The project includes not only capacity-building workshops to strengthen the knowledge of platform members on the topics of participatory governance but are also seeking to find a suitable collaboration model for all of the actors residing in Lazareti. The same effort is also supported by the knowledge obtained during the “ACTive NGOs” project. These projects are especially important because in 2019 the City of Dubrovnik signed a contract with the public company “Dubrovnik Heritage” for the governance of the Lazareti complex and programme development for the buildings not included in the contract with the Art Workshop Lazareti. Therefore, the aforementioned projects and the knowledge as well as conclusions derived from them will be especially important in consolidating the relationship between this new actor in the complex and the rest of the users. All of this will help in advancing the idea shared by all the actors residing in the complex: to transform Lazareti into a social-cultural centre through collaborative effort and future collaborative projects.

The long-term lease contract signed by the Art Workshop Lazareti with the City of Dubrovnik in 2000 helped the organisation to stabilise its work as an NGO and helped in developing further its vision of Lazareti as a cultural and social centre as well as to bring it into the discourse on a local and national policy level. It was a good basis not only for establishing the unofficial advocacy Platform for Lazareti but also to be a part of a new generation of social-cultural centres, emerging across Croatia, based on public-civil partnerships. The spaces included in the contract were also proven to be significant support for different initiatives in Dubrovnik and NGOs thus further strengthening the civil scene.

As a conclusion, Srdjana Cvijetic notes: “We have always considered the contract as a form of trust given to us – we were entrusted to govern and create a valuable space. This is something that we have considered to be the first step towards civil-public partnership and collaborative governance. However, it also needs to be noted that for a long time we had distrust and dilemmas coming from both sides (the City of Dubrovnik and the NGOs), and this is something that needs to be worked with and worked on. However, through mutual projects and collaborations with the representatives from the “Dubrovnik Heritage”, our relationship is much different, more real, and more humane. This enabled all of us to start envisioning how the future collaboration model should look like. It will be a long way, but we are on the right track.”