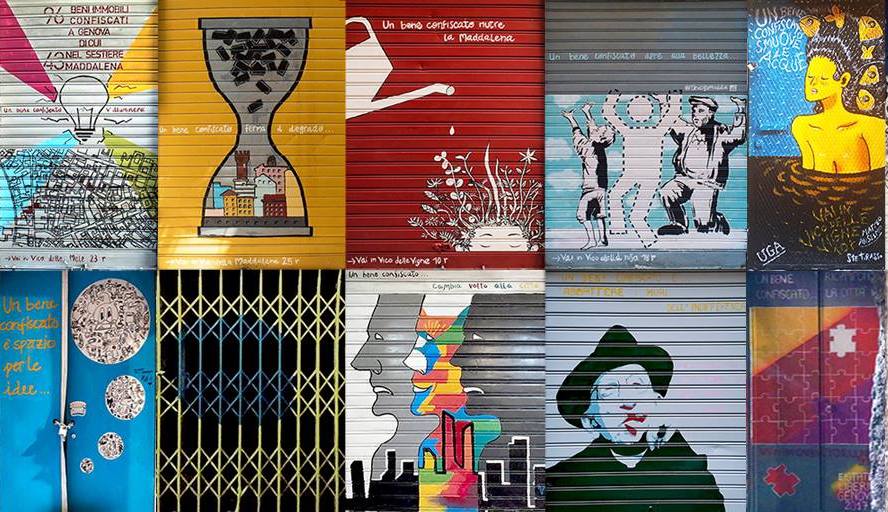 Confiscation is an asset security measure consisting in the expropriation, in favour of the State, of something which has been used to commit an offence or which constitutes its profit; or even of something dangerous, objectively or subjectively. This measure is a legislative tool for the Italian State to fight the power of the Mafia, while strengthening the civic economy and third sector activities. Furthermore, confiscation is seen as a means to prevent the Mafia from becoming even richer in a delicate time like the COVID-19 crisis by acquiring activities that are forced to close.

In Italy, institutional fight against organised crime has a great, albeit recent, history. The Italian law n.646/1982 introducing the offence of Mafia-type criminal conspiracy in the Italian Criminal Code, promoted by Virginio Rognoni, was inspired by the Draft Law written by Pio La Torre who was murdered by Cosa Nostra – the Sicilian Mafia – because of its legal commitment to fight against organised crime. The work of a generation of politicians, public officers, and magistrates (at that time, Rognoni was Minister of Internal Affairs while Pio La Torre was regional secretary of the PCI, the Italian Communist Party) set the base for Italian legislation to fight illegal activities and open up new scenarios for civic activities.

“It is necessary to break the link between the possessed asset and the mafia groups, affecting their economic power and marking the border between legal and illegal economy.” Pio La Torre

The intuition of Pio La Torre, who saw economic power in assets possessed by the Mafia, led to the introduction of confiscation of assets resulting from the illicit accumulation of wealth by the Mafia’s criminal activities. Thanks to the work of La Torre and others of his generation, a subject condemned for Mafia association, can be now deprived of his/her movable and immovable goods, and properties accumulated illegally. Normally, a judicial administrator is appointed by the State to take care of seized assets for the entire trial until the sentence that can lead to definitive confiscation. This law was only the first step when fighting the power of organised crime for the common good.

Fourteen years later a second step was made. The 109/1996 Law of popular initiative promoted by “Libera. Associazione, nomi e numeri contro la mafia”, that collected one million signatures, stipulated that confiscated assets have to be assigned to cooperatives, associations and third sector activities which promote a social purpose. The aim and the principle at the base of this law is clear: assets and properties that once belonged to a single private individual, and were used to enrich criminal organisations, must return to the hands, and for the good of civil society.

A third important legislative step to fight against the power of the Mafia was taken in 2010 with the establishment of the National Agency for the administration and destination of assets seized and confiscated from organised crime, hereinafter ANBSC. The Agency’s aim is to centralise the management of confiscated assets and to verify that the persons who have been assigned the assets provide for their use in accordance with the purposes for which they were destined.

However, the effort done since the law inspired by Pio La Torre has not been enough to produce the big change the civil society was expecting to fight the power of Mafias and promote the reassignment, and regeneration of confiscated assets that would strengthen third sector activities and social cooperatives. In particular, the last step of the three shown here constitutes a failure: the ANBSC Agency has not been sufficiently staffed and funded and for this reason has even risked closure. A large part of the properties seized and then confiscated are not assigned because of legal-administrative problems, others are abandoned to their state of deterioration, others are still used by the same Mafiosi or their families. In addition to economic damage, the bankruptcy management of confiscated assets causes social and image damage to the State.

Yet, despite the management and re-assignation of confiscated spaces being a problematic matter, many third sector associations have managed to access confiscated goods (real estate assets and agricultural fields) according to the law 109/96. Libera, the association that promoted the 109/96 law does not directly manage the assets confiscated from organised crime but plays an important role in the Italian third sector environment. Libera promotes training and participatory planning interventions useful to turn confiscated assets into resources capable of triggering local development processes and increasing social cohesion, thanks also to the work of a great number of volunteers, activists and enthusiasts. In 2016, twenty years after the approval of the law, Libera carried out research to know the actual state of reassigned assets.

At the date of the survey, in 2016, 777 different actors were involved in the management of real estate assets confiscated from organised crime, obtained under concession from local authorities, in no less than 17 out of 20 Italian regions. From the data collected through the territorial action of the Libera network, it emerged that just over half of the social realities are made up of associations of different types (408) while there are 25% of social cooperatives (189). Among the other third sector managers, there are 9 amateur sports associations, 27 temporary associations, 10 consortia of cooperatives, 48 associations in the religious world (dioceses, parishes and caritas), 21 foundations, 13 scouting groups and finally 13 schools of different orders and grades. The region with the highest number of social realities managing goods confiscated from the Mafia is Sicily with 204 organisations, followed by Lombardy with 151, Campania with 124, Calabria with 110 followed by Apulia with 71 and Lazio with 46.

In addition to this work, as most of the confiscated assets are agricultural fields in Southern Italy, Libera has also created a brand to promote and sell products coming from confiscated fields: Libera Terra is a brand that brings together various cooperatives that are members of the Libera association network and are operating in confiscated spaces.

Despite the well-known difficulties of ANBSC, in the last year, perhaps as a result of the economic crisis due to the COVID emergency, the Italian State has decided to invest in the work of the Agency and in the reuse of confiscated assets. Confiscation is seen as an instrument to combat the Mafia that could become even richer during the COVID-19 crisis by acquiring activities that are forced to close. The confiscated assets are thus understood as common goods, as tools to strengthen the fundamental rights that are at the basis for the fight against the Mafia and illegal activities.

On 31 July 2020, ANBSC announced an important and innovative call for tenders for the reallocation of more than 1000 confiscated spaces across Italy. This “experimental” call for proposals aims to put into practice Article 48.3 letter C bis of the Italian Anti-Mafia Code and to implement what is described in the “Guidelines for the administration of seized and confiscated properties” that the Agency published last October. For the first time, the protagonists of a call for tenders are the third sector bodies, from the voluntary sector and cooperatives, to which the Agency can “directly” assign the confiscated properties without going through local authorities, municipalities and regions – the intermediation between ANBSC and Local Authorities is among the major problems with respect to the timing of reallocations.

More precisely, the call for proposals concerns 1410 real estate properties that can be given as free land lease for a 10-year period (with the possibility of extending the lease to 10 more years) or for a 30-years (non-renewable) period of allocation if the proposal consists of the extraordinary maintenance of the asset. The call also establishes a preference clause for projects supported by public administrations that are willing to acquire the property of confiscated assets. The agency also commits to financially support some of the projects presented, thanks to the resources included in the Italian Budget Law (law no. 160\2019) which provides for a fund of €1million per year, for the three-year period 2020-2022; some of the selected projects, therefore, on the basis of the final rankings, will be able to count on a non-repayable contribution of a maximum of €50,000 for the starting up of social activities. The work areas envisioned by the call are: social inclusion, health and prevention, employment and research, culture, security and legality.

Due to the great interest raised by this call, the deadline has been postponed from 31 October to  15 of December 2020. This call represents a big opportunity to strengthen the power of  the third sector against the Mafia. Moreover, it is a unique opportunity for the third sector activities to access properties that help them deliver better services, strengthening civil society, and social cohesion. But to reassign properties is not enough, the provision of €1 million per year could still just be symbolic if we consider that it has to serve 1410 assets. Among others claiming for proper funding, Fondazione per il Sud has therefore proposed to endow the ANBSC Agency with €200 million, drawing on the Italian Justice Fund (“Fondo Unico di Giustizia” of the Italian Ministry of Justice), fuelled by cash and securities seized or confiscated from organised crime.

All of these are necessary efforts as good practices built up over the years all over Italy on the reuse of confiscated assets have often triggered social redemption processes in the territories, producing a healthy economy, and drawing attention to the importance of organising structured access to space for NGOs helping their activities to grow.