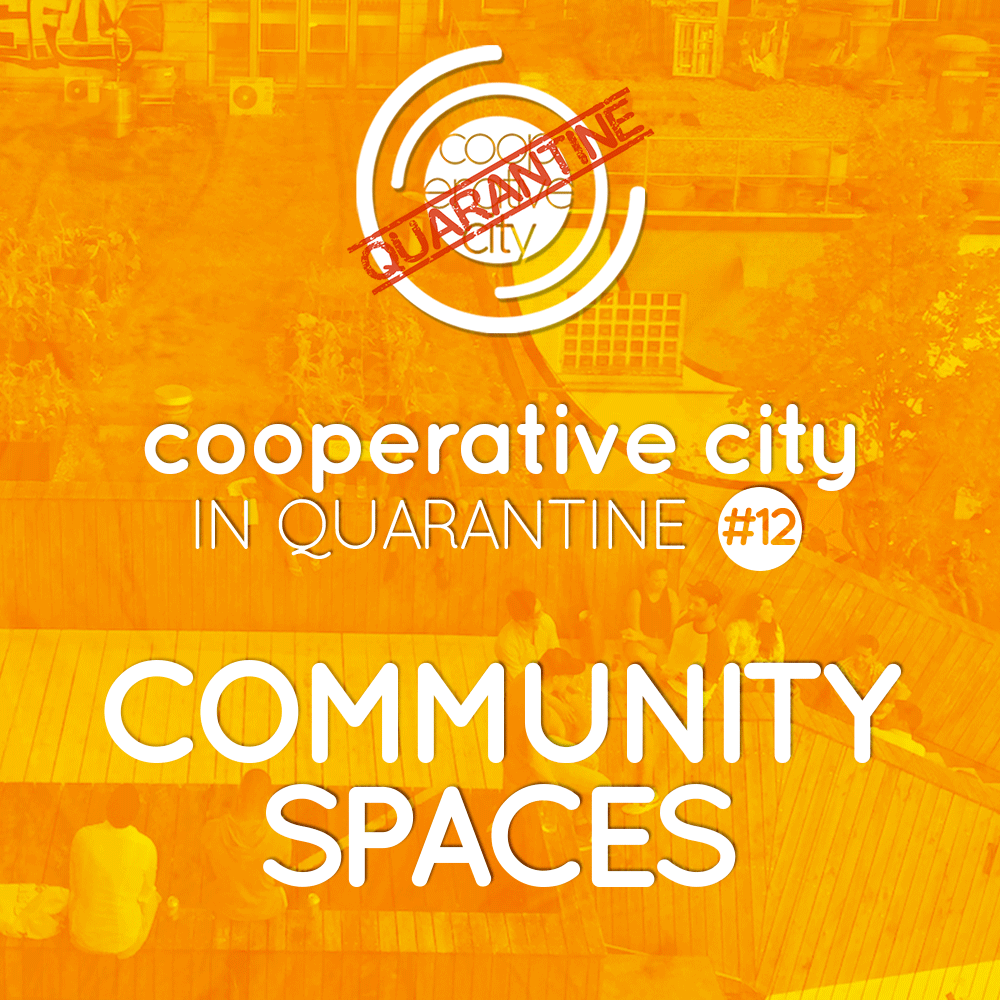 Since the 2008 economic crisis, cities in Europe have witnessed a veritable revolution in community-led development processes. Prompted by the opportunities offered by the last crisis, many formerly vacant buildings and complexes have been reused by “citymakers” and “Re:Kreators” – concerned citizens with the necessary skills to make use of these spaces. In the last decade, many cities introduced policies to give community groups access to vacant spaces and to create modalities for the shared public-civic management of community venues. In other cities, supported by an emerging ethical financial infrastructure, community-led urban development initiatives have jumped scale and established new models that assure the long-term community use of properties through land lease arrangements or shared ownership. The sustainability of all these models depends on a solid balance of expenses and revenues. This balance, like many other business models in our economies, have been radically upset by the current lockdown. Moreover, these initiatives are also often based on even more fragile and sometimes precarious economic models as they are operating outside of traditional economic parameters and logics. How can these community spaces weather the COVID-19 crisis? What policies can help them survive this period? What kinds of financial support and solidarity structures are needed to help community-led development projects flourish?

In many European countries, citizen initiatives had a crucial role in helping local communities overcome the financial difficulties and the challenges caused by austerity measures and reduced public services. Access to buildings or larger complexes left abandoned or underused by the economic recession had offered an opportunity for many of these initiatives to organise themselves around these spaces that have become important reference points for entire neighbourhoods and cities. However, as soon as the property market recouped after the economic crisis, many community initiatives were exposed to economic pressure and were forced to leave their spaces. Other initiatives encountered political hostility: despite some mechanisms of cooperation that enabled initiatives to grow in certain cities, in other contexts, community spaces eventually had to develop their own development models in order to keep their activities running and to ensure the long-term use of their venue. A good example of this is Gólya, a community house in Budapest run by a team of 15 members with a long history of community organizing.

Gergő Birtalan – Gólya opened in Budapest in 2013, in a neighbourhood that was undergoing a major gentrification process. We were renting a privately-owned space and the owner eventually decided to sell the property and make space for office developments, so we had to move.

We needed stability, infrastructure and physical space in order to continue our work. We thought that if we are going to go somewhere else, we should buy property and secure ourselves the possibility to grow. It was difficult, it took us several years to put the funds together and to find investors, then when we found the place, we renovated it ourselves, saving money and obtaining new skills. Our new venue is the Gólya Community House – Kazán. We offer workspace and children daycare services, but we also have a communal repair shop, a bar and we organise concerts and other cultural events. Last but not least, Gólya Community House hosts an alliance of 8 other NGOs – we became an even larger and stronger bottom-up organisation. Luckily, thanks to our previous experiences we were able to manage this crisis better than others.

Hanna Szemző – OpenHeritage identifies and tests best practices of adaptive heritage re-use in Europe. We focus on adaptive reuse, so we don’t analyse all kinds of bottom-up initiatives.
We aim at finding a heritage management model that allows the reuse and maintenance of these places in a sustainable way, working with communities, local businesses, local and municipal administrations. Alternative financial sources and alternative development methods have played a major role in the survival of most community-led initiatives, but as the Covid-19 crisis hit everyone, we became evermore convinced of the fact that public support is necessary and the role of municipalities must be better defined. During these past months, we could see that the entities that have been better embedded in their territory are making it through the crisis in a much easier way, and those who had good relations with the municipality in the past can now count on more support, even if not necessarily in financial terms.

Many community spaces also rely on tourism, as they contribute to leisure and cultural activities of the city they are based in. What is happening to them now that cities are still deserted and most of their nightspots are closed?

Katalin Gennburg – The cultural sector in general has been hit very hard, and a perfect example of this is very well visible in cities like Berlin, where club culture is dependent on visitors and where the venues have to pay rent, leaving them with no immediate perspective for the future. Social welfare measures were immediately put into action, yet they are not enough for survival and they also can’t be considered as a long-term solution. Community centres supported by municipalities, especially those who are based in publicly owned venues, are obviously advantaged because they can receive rent reductions, but considering the fact that many community spaces are based in privately owned venues and that the cultural sector was already facing a crisis, the future is now very unclear. As for tourism, it is clear to me that this pandemic showed us how this industry is not resilient at all, and how we must redefine the working conditions of the millions of people who work in this sector, also focusing on how mass tourism “bought” our city centres, turning them into ghost towns during the lockdown.

The Netherlands are often perceived as a “citymakers’ paradise.” How do citymaker initiatives weather the crisis and what are the tools or solidarity mechanisms that can help them survive this period?

Robbert de Vrieze – In Rotterdam, we have been investing on local resilience for several years now, so we managed to better face the crisis. When the shut down measures were announced, within a couple of days we already had a list of activists and volunteers who activated themselves to organise support initiatives for the neighbourhood. The municipality was also aware of our work, so we gained their trust and their support was rather quick and cooperative. The main issue is that zoning and land use planning are still too focused on plain residential and commercial developments, leaving too little space for community-led development. We need to select properties and take them out of speculation, making them become a common good. As a former member of Rotterdam City Council, I have been working on making zoning easier for community spaces to open.

Hans Karssenberg – We learned from our own experience that community centres make our cities more social, inclusive and liveable, not to mention the fact that more often than not they provide services and cultural opportunities that wouldn’t be there without them. Stadmakersfonds wants to build a new financial infrastructure to support their work, so we provide loans at low interest rates for those entities that intend to acquire property and/or land and use them for providing services for their community. The initiatives we are in touch with turned out to be resilient as they built a varied financial model, and even if it is hard to know what the future holds as we are still in the early stages of this crisis, we think we are on the right track towards the establishment of a new financial infrastructure that can favour community-led developments.

What help is needed from municipalities?

Robbert de Vrieze – A municipality allowing for several fast, small-scale and low-budget community-led initiatives can bring a positive change as it gives citizens the chance to have their say in the matters of their city and neighbourhood. Initiatives will grow, they will create a huge cultural value and a sense of community that can also function as a safety net against poverty and social exclusion.

Hans Karssenberg – Municipalities should also communicate and create national (and European) networks aimed at making sure that community-led initiatives can always find the proper venues at proper prices.

Katalin Gennburg – We need political actors that support these initiatives and make them visible. This implies the fact that a municipality must decide what to do with its properties: do we want to favour speculation or do we want to invest on human and social value?

How can private actors like philanthropic foundations help the cultural sector and especially community spaces?

Matteo Bagnasco – The situation can change greatly from country to country. For example, in Italy there is a huge debate on how the philanthropy sector and other foundations can help the cultural sector at this moment. I personally see three main fields of action:
1. Foundations must provide financial tools that are specifically designed for cultural entities so that they can be less reliant on grants;
2. Cultural operators need to rethink their way of working, so foundations must support capacity building projects and processes;
3. Foundations should be more farsighted and their support should go beyond the single projects and grants, making an ongoing effort to sustain the entities they are in touch with.

Our foundation is involved in supporting culture in several ways. When the lockdown started we realized that the crisis was hitting the cultural sector in very different ways.
Spaces that managed to run their activities independently before the pandemic are now suffering the most due to the fact that all their revenues rely on both the community they operate in and on tourism. At the end of the lockdown they will get back to play their very important role, but how do they survive now, and will they be able to reopen in the future? This is why we launched Rincontriamoci, an extraordinary line of intervention that helps community centres survive during the lockdown before getting back to normal. We gathered hundreds of applications and supported 147 centres across the region of Piedmont. It was also a chance to have an overview on the situation and it allowed us to survey what the network is doing on the territory, so that we will be able to come out with new lines of intervention for the future. We discovered new stakeholders, as new applications show that many cultural centres never applied for funding and now need our funds. We feel the responsibility to do something for them.

There has been a discussion here about solidarity mechanisms beyond cities, at regional, national or supra-national level. What should be done at EU-level?

Hanna Szemző – Initiatives that need money the most are generally the ones that are located in the least “cooperation-friendly” cities and countries of the Union. We need to work on this imbalance we find on the continent, and we definitely cannot do it without EU intervention.

What do citymakers on the ground need?

Gergő Birtalan – When the crisis hit us we had to find new ways to survive, as we didn’t have any safety net. All our efforts and savings had been invested in the renovation of our new venue. But luckily for us, while we were renovating the new space we also began to use our newly acquired renovation skills and started to paint and renovate other people’s houses. And once the lockdown started, our neighbourhood organised a community care programme. We offered to help deliver care packages around the neighbourhood on the cargo bikes provided by the programme. In exchange, we started to use those cargo bikes and launched our delivery service. We created these new jobs from scratch, so that we could sustain ourselves. On the other hand, this situation taught us a lot: we invested in what can be used locally, and that won’t lose value even during a crisis. Also, communicating with people and involving them in what you do makes you stronger in all senses.