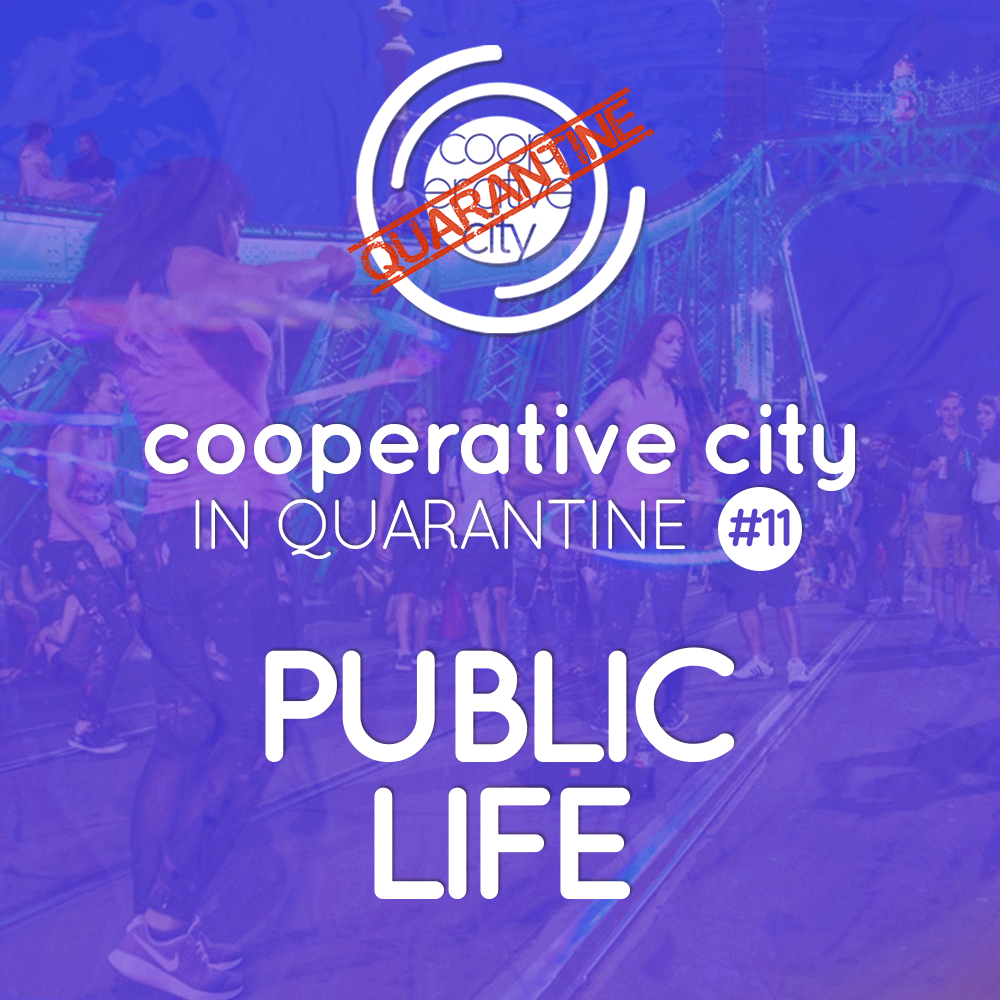 With the pandemic and the subsequent lockdown, public space was one of the most affected parts of our urban life. With the shut down of shops, parks and other gathering places, public life came to a halt in the past months, leaving scars in our social and economic life. How can we heal as a global community, how do we reorganize our streets, how will we get back to enjoying public spaces, and what do we want our cities to become in the future, so that public space can be at everyone’s disposal while contributing to economic development? How will public spaces in the post COVID-19 phase be adapting between public/community and private/commercial use and interest?

We discussed these topics with our guests:

How can cities deal with the current situation and which kind of opportunities can there be for the future?

Roland Krebs – The city of Vienna, together with the city of Oslo are part of a JPI Urban Europe project named PlaceCity. The aim is to use placemaking as a tool for regeneration in urban areas. Vienna is a polycentric city, consisting of many neighbourhoods, with mostly longlasting historic backgrounds. The city aims to bring the old self-sufficiency in those neighbourhoods and created last year an own policy paper on this. In PlaceCity we would like to explore new possibilities to activate these neighbourhoods, involving young practitioners and grassroots organisations. When the Covid crisis began, our public activities came to a halt and we didn’t know what to do.

But at the third week of lockdown, we realised what a great opportunity the situation is for all Vienese. Because the city was taking quick decisions, suddenly many testing opportunities emerged, which helped us citizens to come forward with ideas and to experiment. Luckily, the Vice Mayor of Vienna Birgit Hebein, was very collaborative and made experimentation possible. And suddenly, just in a couple of days pop-up bike lanes appeared in our cities. Usually bureaucracy doesn’t allow fast changes – new bike lanes usually take years to be planned, approved and built.

We as practitioners should learn from this. City administrations can’t do this all by themselves. We as urban planners can activate a cooperative dialogue between city administrations, NGOs, grassroots organizations but also shopkeepers and active citizens, we can really bring positive change.

Francesca Frassoldati – In Canada and the United States there are several examples of how public parks have been connected through pop-up bicycle lanes (e.g.: Toronto). Pop-up installations are very helpful to revitalize not only public spaces but also public debate. As a matter of fact, this crisis made us reflect on what priorities are, what is a domestic space and what isn’t. A public debate on what could be changed or improved in our cities’ public spaces is what we need to deal with in the aftermath.

How can a cooperative relationship with city administrations impact what you do, and what could be a long-lasting outcome of your work?

Cili Lohász – In Budapest, Valyo has been trying to reclaim spaces along the river, making them more accessible to people, and not only to cars. Budapest now has a new mayor with whom we started to lobby and cooperate in order to provide new bike lanes and pedestrian areas along the river. This is a historic step forward for us. Unfortunately, once the crisis started we got stuck, but now we are ready to start again, and starting from May we already organised weekend activities for pedestrians.

How will the economy change as cities “re-open” to citizens, giving them access to the services and the shops that dot the urban territory?

Corrado Topi – Small and medium enterprises (SMEs) represent the biggest part of the economy, as they employ approximately 85% of workers. At the same time, SMEs are the most heavily hit by the virus outbreak. This clearly shows that our economic system doesn’t work, because the economy we built in the last decades is not the economy we need. We need to rethink what we thought was right during the past 20 years and remodel. That means we are not favoritising the actors which are beneficial for us as a society. That leads to inequalities in our economic world but also in our society. And inequalities have been magnified by this crisis – the super-rich and the super-skilled are not suffering as much as the underskilled and gig economy-dependent layers of society. Now it is upon us to find solutions we need for our communities.

Are placemakers responding to the crisis?

Ramon Marrades – Placemakers are used to deal with crises. Now it’s time to be farsighted, as this crisis is unprecedented as it is happening world-wide. We want to prevent dangerous political shifts that want higher control and surveillance measures that will limit civil liberties and will make public spaces unsuitable for healthy social relations. We want to have a say in the matter, involving citizens and reclaiming their role in the aftermath.

Francesca Frassoldati – The last few weeks helped us realise how urgent it is to react. An issue that started being debated quite soon is urban density. In the very beginning it seemed that larger cities were more difficult to manage, but as smaller cities started to be filled with second-home owners coming from bigger cities we realised how dangerous it is not to intervene on rural and suburban development. Also, during these past months, as we saw that the streets were almost empty, inequality has become evermore evident. Those who don’t have a home didn’t have a chance to “stay in”, and unfortunately we saw how several city administrations still tried to hide this issue by segregating homeless people in improvised shelters far from city centres. This doesn’t solve the issue at all, so public social responsibility is a priority topic that requires the involvement of all layers of society, as municipalities alone are not acting on it properly.

Roland Krebs – Starting new migration waves, because our cities are not good enough can’t be a future proof model. Big metropolitan areas with one city centre create huge issues from both the social and environmental point of view. As I mentioned before, a polycentric, walkable city could help better address environmental and social issues, bringing positive change as it would redistribute services, population and resources while guaranteeing the attention environmental, social and infrastructural issues deserve.

Will homeless and poverty reduction policies change after this?

Ramon Marrades – In many countries and cities, local and central administrations improved social security measures and temporarily stopped evictions. Hopefully, this will teach us a lesson, and these temporary measures have the chance to stay after this.

Corrado Topi – Many cities around Europe have put economic growth before equity. But equity has to go before economic growth. Human rights, sustainable development and environmental awareness must go hand in hand with economic growth, otherwise cities – and societies – will fail. Our present system is favouring vulture capitalism, and that is very harmful for both the local economy and the global environment. For example, many e-commerce based businesses can plunge into the middle of the crisis and sell even more, making SMEs go bankrupt while negatively impacting the environment, as the evermore increasing number of packaging and wrapping materials will invade our waste facilities, without the big companies paying their ecological footprint. Let’s tax the environmental impact  with the right price.

How easy is it to change economic models and favour local businesses?

Ramon Marrades – Cities have a lot of power to favour local businesses via public space management, smart zoning and mobility policies, but unfortunately they haven’t been using these resources enough. We need to revitalise the ground floors of our streets introducing new regulations to promote SMEs at local level, and last but not least we need to watchdog the work of municipalities and national governments, making sure they listen to our requests and act on them.

There are also conflicting interests in public life. We could say that public spaces are also the “glue” between the citizens, cultural assets and all those SMEs that provide leisure opportunities. Could the development of public spaces help redistribute nightlife spots in more areas of the city instead of overcrowding certain areas, causing issues between residents and guests?

Cili Lohász – We have many examples of bad public space management that turned entire areas of the city into nightlife spots, making it evermore difficult for residents to live there because of noise, skyrocketing rental prices and a growing scarcity of businesses and other services that residents need in their neighbourhood. During this lockdown we could really see how the central districts became ghost towns as soon as nightspots, tourist attractions and tourist accommodation venues closed. We need to regulate the economic, tourist and environmental aspects of public space. As Valyo, we want to protect the Danube from an even stronger gentrification process, as the river is for everyone to enjoy, regardless of their socioeconomic status.

Roland Krebs – This dilemma exists in almost every city. We will address this issue in the new edition of Urbanize! Festival in October this year. We will discuss gentrification, placemaking and what this pandemic taught us in terms of public life, in the hopes we can find new perspectives and solutions.

What do you wish for the upcoming future?

Roland Krebs – I wish we won’t have a second wave of Coronavirus that will throw us into a new quarantine. Because we planned many activities to work on those issues collectively, and we need to get closer to experiment with solutions.

Corrado Topi – My hope is that we learned the lesson. We need to focus again on safety nets, resilience and equity, rethinking the economic system we live in and we need to plan the path to the system we need.

Cili Lohász – We need to rethink and rebuild public spaces. The last months showed their importance for our society. I hope we will be able to bring change very soon, as people really need it.

Ramon Marrades – I wish for a new golden age of utopias, where cities and their citizens will learn their lessons and emerge from this crisis, making public life more collaborative, sustainable, inclusive and healthy.