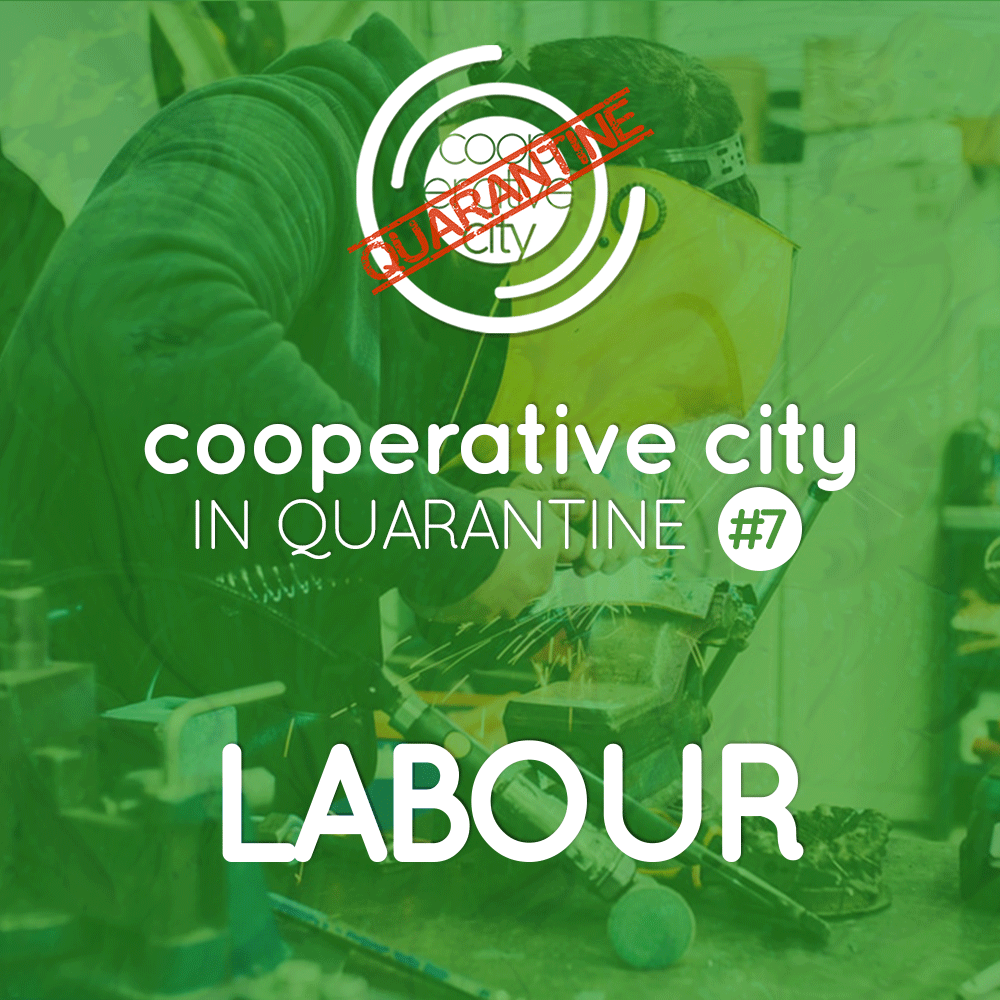 Given the current situation, more than 200 million people could become unemployed as a result of this crisis. Not everyone can work home, and disadvantaged categories such as riders, sex workers, and harvest workers are risking even more.

It is undeniable that we will be facing a huge employment crisis, much bigger than the 2008-09 crisis. Only in the coming weeks, more than 35 million people could lose their jobs.

Daniela Patti from Cooperative City and Simone d’Antonio – Communication Manager for the Network of Italian Municipalities (ANCI) and URBACT Program expert, hosted this webinar with contributions from:

From this very rich discussion, the main learning points were:

How can we ensure that labour will be an opportunity for social cohesion and that nobody will be left behind?

Josef Zehetner – The Innovation in Politics Institute is constantly looking for solutions, collecting good examples of practices in the fields of politics, business, and civil society coming from all over the EU. Now we are trying to analyze all the aspects of life that are affected by the Covid-19 outbreak. We have already collected over 300 projects scattered through 15 EU countries. The aim is to produce new ideas while documenting and observing what political practices are working during the crisis and what actions can be taken by civil society. We have developed insights and made a list of actions politicians should take in order to cope with the current state of affairs. Our institute was launched during the migrant crisis of 2015 as we saw a growing process of erosion in democracy and we wanted to bring new perspectives in. We organize the Innovation in Politics Award, so that we can propose solutions for positive change, in the hopes such practices will make society more inclusive and resilient.

What is the direct impact that Covid-19 has on the living and working conditions of the most vulnerable groups in society? What are the risks now?

Elisa Sermarini – Before the outbreak hit Italy, five million people lived in absolute poverty and 9 in relative poverty, while the early school leaving rate was 14% and the unemployment rate hit 11%. Poverty triplicated over the past 10 years, as much as the profits of the few billionaires. The Mafia was flourishing, and now it shows no signs of bad health, attracting people who would otherwise starve. By December we estimate around 18 million people in poverty.

What trends are taking place in the business sector?

Jim Sims – I find it worrying that this crisis is affecting everybody, successful and challenged business alike, as it destroys society as we know it. But I’m noticing cohesion and localized community collaboration. Freelancers try and help each other in the UK through a Facebook page, for example. Necessity is the mother of invention, and innovation needs networking.

Those businesses that practice solidarity will stay healthier, while those who are just profiting from the crisis, exploiting workers even more will probably be in trouble as evermore consumers are becoming more aware.

What can we do and suggest to foster a lasting social cohesion?

Josef Zehetner – Whenever smart working is possible, the more a profession is digitalized, the better it will come out of this crisis. In Austria, a company encouraged work from home, introduced the four-day working week, kept the wage at 100%, and made sure the employees would receive no work messages outside of working hours and during the weekend. Productivity got even better and everybody is obviously feeling better. Now they are doing fine because they were able to tackle the virus outbreak. So innovation is important to redefine working conditions for the good of the community, which will in turn become more cooperative.

The digital divide is an obstacle to social cohesion: workers’ councils right now have no means to get in touch with those workers that can’t assembly, and it becomes harder to track poor and dangerous working conditions. So we must never forget the work of work councils.

Elisa Sermarini – The Covid-19 epidemic exposed the failure of the social policies that were enacted during the past years. We addressed the government, as the fundamental rights of people need to be put at the center of the agenda, without forgetting that people need basic income and decent working conditions. Welfare is not workfare. We also want access to housing and demand the blocking of rents for those who can’t afford it. Also, poor people without a fixed residence find it hard to access welfare services while they are those who need them the most. This needs to change, so we need to build a new system and a multi-year plan of intervention to change the state of social exclusion.

In a period when most physician offices are closed, the digitalization of services can help local governments cope much better with the crisis as they are more accessible to the citizenry. Are there good examples of municipalities that are cutting red tape?

Jim Sims – Lots of municipalities are digitizing their structure so that they can work online as much as possible in order to be more reachable, effective, and also safe from a sanitary point of view. A good example of that is how the seven partner cities of the BluAct project started this process before the pandemic and are now coping better with the crisis than other municipalities that didn’t yet manage to shift to digital.

Lucia Scopelliti – The Municipality of Milan has been increasingly experimenting with smart working since 2016. Before the crisis, 500 employees worked from home – today that number rose to 6000 out of 14000 Municipality employees. Obviously, smart working goes with the digitalization of services. For example, in March 82% of total citizen files were digitally downloaded and accessible to users.

Can a city plan help ensure the inclusion of the whole workforce?

Lucia Scopelliti – Milan was brutally hit by the virus – only at the municipality level, the first estimates from trade unions foresee a loss of approximately 150,000 jobs by the end of the year. The Municipality of Milan was very fast in launching a participatory plan – labour is at the center of the plan, with measures taken in order to foster smart working and digital access for the public. We have also been working on timetable policies, in order to help companies de-synchronize shifts while ensuring that production doesn’t stop and that workers can safely use public transport. The current participatory plan is still in its draft phase, and it is expected to be commented on by citizens. Civil society is responding very actively, sending hundreds of comments per day.

How can start-ups respond to the crisis, and what support do they need to be more effective?

Chris Richmond N’zi – Skills pave the way for employability and prosperity. Individuals with the right skills can aspire to high-quality jobs and fully realize their potential as active citizens. Aging and migration affect the labour market, leading to a shortage of skills, so we need to increase the labour market participation and productivity. This process should include everyone, including people from disadvantaged backgrounds, and that of course includes migrants. Informal skills are usually underestimated, but identifying and validating these skills can help enhance talent and prepare workers for further training. So policymakers need reliable data to work on. Mygrants is an app based on microlearning that offers information and legal support on the rights and duties of immigrants and the on the asylum system. We also offer training to validate the background and also to further educate workers so that they can improve their working conditions. We basically build a dynamic CV shaped on the personal experience of the trainee and that is updated every time a user has completed training. We share the data with companies, making it easier for them to find workers while helping fragile communities. Meantime, we are trying to understand the needs of the market. We built another platform called Pick me – through this app, companies can access about 90,000 trainee profiles and they can track them to see their evolution with the aim to engage them. Both governments and public institutions need to be aware of the value of data and must learn how to manage them. Now it’s the time to understand this is the tip of the iceberg. Italy needs hundreds of thousands of workers in the agricultural sector, and at the same time, it also needs approximately 40000 new immigrants per year until 2060 to maintain the health system and social security. This would be the right moment to build a new EU policy on relocation based on skills and market shortage. Immigrants are beneficial to the host communities and can boost employment.

Lucia Scopelliti – Many economies ask to strengthen political and fiscal schemes in the EU. In Italy, there are big differences between sectors. At the moment, in Italy, there are no ad hoc measures for innovative start-ups, for example. According to a recent report from Startup Genome, 74% of start-ups had to terminate full-time employees, while 40% of start-ups had to lay off 20% or more of their staff. The most helpful policies would be to receive grants to preserve liquidity and access to tools for investments to boost employment. It will be necessary to provide ad hoc solutions for the most afflicted sectors, such as tourism, culture, and entertainment.

An audience member remarked that social cohesion is related to the kind of jobs we will be creating in the following years.

Social movements should connect with employers, keeping an eye on circular and regenerative economy. Are there any good examples of this approach?

Jim Sims – I don’t see a lot of relations between social movements and employers yet. I think we’re not there yet, unfortunately, because we still need to design a system that allows this kind of exchange.

Lucia Scopelliti – The city of Milan has been following several projects that can enhance social cohesion. One of them is an initiative launched by the City of Seoul called International Forum on Transforming Cities for Decent Work. Through the analysis of best practices, we have developed new policies that will lead to the establishment of a helpdesk for riders run in collaboration with trade unions in order to tackle the issues related to unfair employment contract clauses and unfair working conditions. From the point of view of sustainability, digital manufacturing can play a big role in sustainable development, and right now it can also turn out useful to manage the sanitary crisis – a European project called REFLOW gave us the know-how to make many fab labs collaborate with several NGOs in order to provide masks and other protection tools that can help deal with the emergency.

Chris Richmond N’zi – We need more social entrepreneurship. We should focus on the pain citizens are facing before thinking about the services we want to deliver. We need to identify what problems need to be solved, and then see what is missing instead of building services that already exist and should only be improved. Fablabs, but also incubators and accelerators should be boosted, as they can redefine the concept of social entrepreneurship as a creator of innovation and values for decent work.