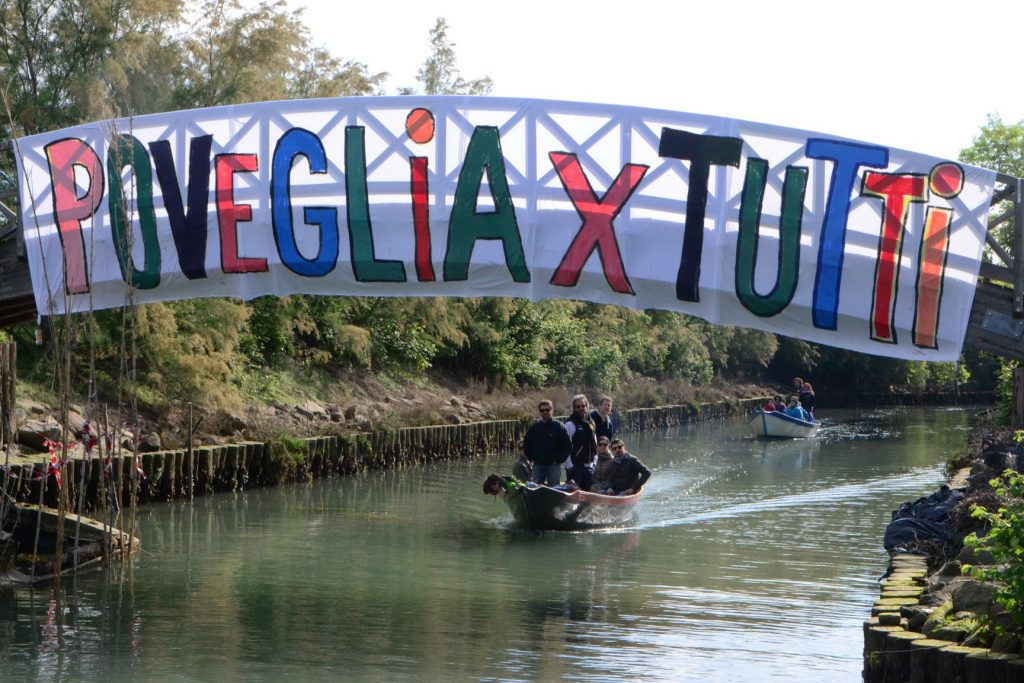 Poveglia per Tutti is an association whose aim is to reclaim Poveglia, one of the many islands scattered across the Venetian lagoon, and make it a public place for the Venetian community to enjoy rather than yet another tourist resort. The island hosted a geriatric hospital that was abandoned in 1968. Since then, apart from lots of funds spent in order to maintain the shores, Poveglia is deserted, and the few attempts at finding it a purpose did not end well, as the state property office has rather been trying to sell this island to private investors while the association wants to protect Poveglia from the purely lucrative grip of the tourist industry.

“We want this island to be a part of the city where people can meet and live, far from the purely lucrative grip of the industry.”

The people who now form the association found out about the sale of the island in April 2014. Even though the first news about the sale of Poveglia Island was on local news, media attention at national level was scarce because privatisation operations are a really big thing in Italy, and very often investors are directly linked to press companies. As a matter of fact, local press started to get interested in this umpteenth gentrification attempt only after it was reported internationally. The first ones to understand what was going on were the people living on Giudecca, a close-by island that nowadays is undergoing a gentrification process on the northern shore of the island. Historically, resident Venetians have always seen the southern lagoon as some sort of an urban park. In the past 15-20 years, at least 5 of the 6 islands forming the small archipelago lying behind Giudecca have been privatised. Step by step, public spaces started to disappear. The last one is Poveglia, which is why there is so much local attention towards it. Right from the beginning, Poveglia per Tutti was an informal group of people meeting in a bar, a true melting pot: there were people whose job is related to tourism and commerce, there were craftsmen but also other kinds of professionals. The variety of walks of life present in this collective talk helped the group find common ground on what is important for the city they live in and at the same time it also showed how important the initiative is for everybody.

“The variety of walks of life present in this collective talk helped us find common ground on what is important for the city we live in.”

At first the group thought they would collect about 200 subscriptions and organize a crowdfunding activity – 20.000€ were needed in order to set up a campaign showing that there is also a part of the citizenry interested in the development process of this island, and not only the same old big investors. Due to these aspects, instead of 200 people, they managed to reach roughly 5000. It is as if 10% of Venetian residents were part of this campaign. The response was mind-blowing – sometimes up to 400 people showed up at meetings and the group soon understood that they needed to have a well-defined strategy in order to give sense to all those multiple requests. Hundreds of people dedicated time, energy and resources to this cause. They managed to build a structure with all the necessary features, striving to make this an international case, establishing an international network around this mission and gaining around 1500 new members from several countries, mainly from France and the UK, but also from Germany and the US.

“A monofunctional approach would kill this island just the way it is slowly killing the city of Venice.”

The investment groups that acquired other islands across the lagoon influenced the concept of what is possible to do with a plot of land in complete disregard of the community that lives there. But this time, the reaction from political institutions and the entrepreneurial world was interesting, as big investors basically decided to retreat. For example, Rose Island or San Clemente were bought in order to be ready-to-sell resources. Regarding Poveglia, they perceived a resistance that was not worth fighting against. The current mayor of Venice is himself an entrepreneur, and he is now trying to sell the island to another local entrepreneur for a rather low amount of money (half a million €), considering the fact that there weren’t other international competitors. During the big privatisation reform that started with the Monti administration, many similar situations aroused across the country – the Budelli beach in Sardinia, the Cavallerizza Reale in the heart of Turin, the castle of Sammezzano and the Mondeggi farm close to Florence, just to name but a few. Even though the dynamics of these situations are different, the aim is the same: this is not just a civil initiative to keep common resources for the good of the community, it is also a reflection on self-management in the age of big privatisations.

Poveglia per Tutti elaborated a method. A monofunctional approach towards the management of this island would kill it just the way it killed the surrounding islands and just how it is slowly killing the city of Venice since it decided to exclusively dedicate itself to tourism. The association thinks that the economic system survives only when it lives out of a network of socioeconomic relations favoring the regeneration of the weakest layers of the community. In a mono-economic system this is not possible, as inequality only creates breakdowns and eventually the exodus of those who cannot afford to live there anymore. Instead, they want to build a network that can manage this island cutting it off from the tourism industry as it is surrounded by it and it is poisoning the socioeconomic system. The group is in contact with six European universities in addition to local entrepreneurs who proposed to set up commercial activities that could have a positive effect on the island, yet it is all work in progress.

“Building a network means getting stronger and helping one another.”

Initially, the state property office let the association use the island for care and maintenance purposes. But on February 2018 the office changed its behavior. They launched a call for the repurposing of the plot of land, the typical kind of call that is generally used for tourism development. Apart from this fact, they officially barred anyone from setting foot on the island, and considering that the recent maintenance of the shores cost all residents around 22 million €, members think this decision is outrageous. Last but not least, they were denied the right to dock anywhere closer than 20 meters from the island. It was the first time something like this happened in the whole lagoon. They were given crafty excuses according to which it would be dangerous to dock near the island, as if this weren’t the case across the whole lagoon. According to Poveglia per Tutti, this was nothing but a trick to cover up dodgy business. As a consequence of protests and strong criticism, in November 2018 the state property office suspended this measure, allowing people to dock by the island again, yet nothing else happened.

Poveglia per Tutti started from little steps in the hope of creating an avalanche. Reopening hiking trails, for instance, served to understand the needs of the place. The association is now continuing to build a network of relations, getting to know communities that share similar experiences. They think that all these situations have a common political matrix affecting the whole country, and possibly the whole continent. Building such a network means getting stronger and helping one another.

One comment on “Protecting common assets from privatisation: Poveglia per Tutti in Venice”