A former warehouse has become a living lab where the spatial and economical needs of small entrepreneurs are studied in order to promote mixed-use spaces in the future Nordbahnhof district. Working with the private and the public sector, “Mischung: Possible Nordbahnhof” is helping the City of Vienna to enhance a sustainable and affordable urban growth through cooperation among all the players involved in the city’s development.

“Variety of functions and affordability is something hard to realize in urban development, even when it’s planned.”

How did this mixed-use laboratory start?

Mischung: Possible! started as a research project, focusing on how mixed-use spaces were integrated in urban development, and then it evolved into a demonstration project where the theory and the results of the initial research are tested.
In our cities there’s an existing gap between intentions and real instruments when it comes to mixed-use development: the ambition of having mixed-use livable areas has to face a lack of real instruments and clear roles for this purpose. Urban development in Europe, and especially in the case of Vienna, tends to concentrate on new residential buildings where there are already well defined players and advanced subsidies systems. The situation is totally different when it comes to develop all the non-residential uses (offices or commercial blocks), because in this case there are no affordable or small scale spaces like the ones that traditionally have been developed in our cities.
Variety of functions and affordability is something hard to realize in urban development, even when it’s planned.

In our initial research we questioned the obstacles to the production of mixed-use spaces and we tried to find solutions to go beyond the current trend. Afterwards we have proposed a project testing some new approaches to urban planning and this is how this second phase started. 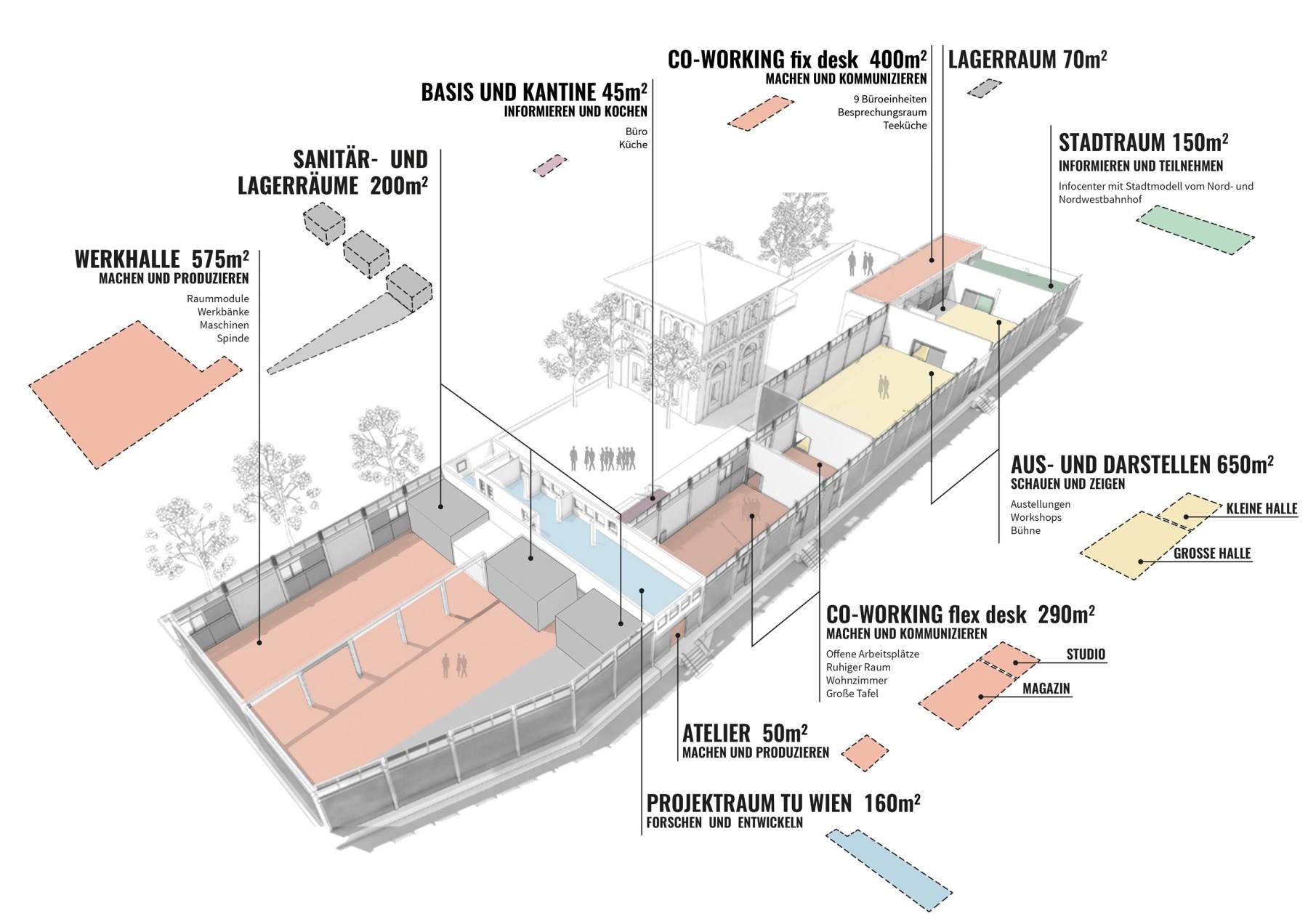 How are you working with Nordbahnhalle’s users to help the creation of mixed-use spaces in the development process?

At first our idea was to activate an infrastructure that on the long term could support a non-residential development.

On the one hand we wanted to have affordable working spaces to bring together a small group of entrepreneurs that could already work in this district but that could also move to the future urban development. While doing so we want to highlight the fact that this district is more than just a residential area, not only to people living here but also to the consortium of developers that is now more conscious of the potential of this area. Thanks to this first group of entrepreneurs we are building up connections, and also new forms of cooperation that wouldn’t be possible otherwise. As a result we see a new awareness and a new identity for this neighbourhood.
Nordbahnhalle is creating a multi-level network of relations. We connect all the actors involved in this urban development at every level: the City of Vienna, private developers delegated to build new districts and the Architekturzentrum,  just to name a few.

One of the problems we have found out in our research is the fact that developers have no idea of small entrepreneur’s profiles because their ideal user would be a supermarket store as it can guarantee safe revenues.

Nordbahnhalle enables a learning process: here we study small entrepreneurs’ needs as we get to know more about them, as well as how to deal with complexity in the use of working spaces. Our purpose is to have a deep understanding of how cooperative working can be enhanced, as well as to have the right know how, thus a toolkit to offer affordable spaces also to small businesses.

Small businesses alone can’t afford to pay for a 5’000 square metres space rent, but if they could work together they would be able to pay the rent needed by developers. It is comparable to a kind of microcredit system: small ammounts of money together can represent a high-performing economic system. If everyone can afford to pay part of the rent, then the only barrier is how to get the right people together.

What about the financial sustainability of Mischung: Nordbahnhof?

The project is funded by a research programme of the Austrian Climate and Energy Fund called “Smart cities Initiative“. Thanks to this programme our initial research (Mischung: Possible!) was funded for the 80% of its cost and our current project (Mischung: Nordbahnhof) for approximately 60%.

During the whole process we have been working as a consortium: initially, next to the Technical University leading the project, there was the planner leading the local Gebietsbetreuung office together with the masterplanner of the second development phase. In this second phase we are not working with the Gebietsbetreuung office but with the Architekturzentrum, the social entrepreneur imGrätzl.at and the masterplanner of this area. Also the private developers joined us. Private developers are important in this phase as they are a commercial group that is building this area for the City of Vienna and they are also co-funding our project. Also the Austrian Federal Railways company (ÖBB), who is still owining the area, is supporting us.

We are not receiving any financial support from the City of Vienna but there is a close synergy space.

Among the people working on the project there are Christian Peer from the TU , who is co-leading the project and Peter Fattinger who is working and researching here with his students in the Design.build Studio.

Is there any development or change in public policies for mixed-use development in Vienna since you started this project?

This is a relevant issue for the City of Vienna as the city grows. The local administration has been facing the problem of mixed-use space since long time now, and today especially here and in Seestadt Aspern.

Some new and interesting approaches have been used to tackle this issue: for Seestadt Aspern a special developer was put in charge of the main street-level spaces on the main road. In this case one problem was the background of this player as a shopping center developer. In shopping centers you have a type of spaces that is meant to bring enough money to developers in order to have a safe investment while all the rest, mainly small scale stores, are just a consequence. Small stores can’t afford to pay the same ammount of money that big stores are able to pay, for this reason in shopping centers you have different levels of rents.
A supermarket chain can pay way more than a small store, no matter the scale of the building. For small entrepreneurs on the one hand there’s the need to reduce space dimension to make spaces more affordable because at the end what is important for a small entrepreneur is the total cost of a space. On the other hand there is the possibility to have a cooperative working community that could together occupy a big space, because developers will always try to build big spaces.

To face all of the problems linked with the management of local stores at a street-level (price per square meter, rent diversification) the idea to have a special player in the process is not wrong. Basically the only way to have affordable spaces is to fund them with high residential rents or with commercial areas with higher rental yields.

The city of Vienna is working on the development of mixed-use but the problem is always how to fund these spaces. Residential buildings are always the first issue in a growing city, therefore all the expertise and resources are focused on them. On the long term this can lead to the risk to have mono-functional parts of the city, which – from many points of view – is not sustainable.