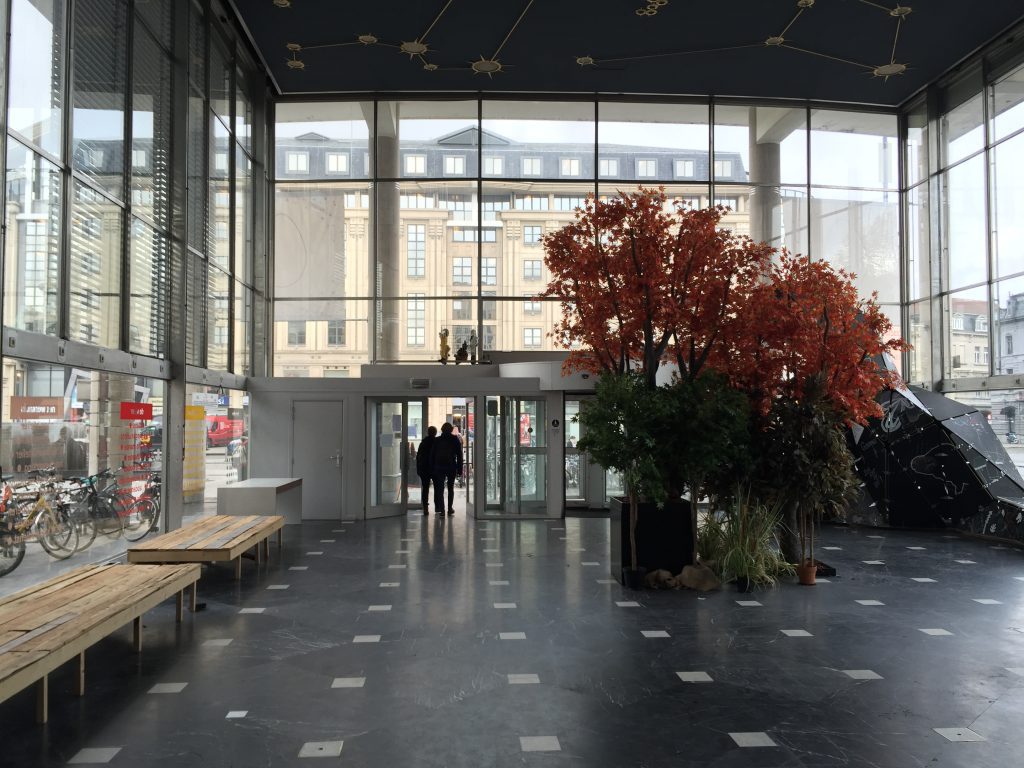 NEST is a temporary use project in the former City Library of Ghent awaiting refurbishment and a new use. The 7,000 m2 building, was given to an alliance of organisations for temporary use until construction works begin. During its year of temporary use, the building has hosted about 50 different projects and many events and initiatives on its six floors. Despite the end of this temporary use experiment in May 2018, the legacies of this period are manifold: new communities, skills and businesses were developed, creating a new momentum to the city of Ghent.

“New relationships were formed, new partnerships set up and experiences were gathered”

What is the story of this building?

It was a showroom of electrics appliances in the old days, with the newest dishwashers and television screens. People would come and watch the evening news and sit around the window – I heard these stories from the elderly. Then it became a library until it moved into a new building. Between the time the library moved and the beginning of the building’s reconstruction there was a void, an empty building, and empty buildings have the tendency to get squatted, especially a big building like this. To prevent this, the city came up with the idea to ask people in the city of Ghent to propose projects for the building.

How did citizens react to this idea?

Everyone who wanted or needed space for their own project from coaching room, co-working space to dancing room or event space, all answered the call. There were about 270 proposals by candidates who were interested; about 30 initiatives of these are still in the building. The city came out with the open call in January 2017, we had to present our project to the city by the end of March and in late April we received the answer that we can use the building. We got the keys in the beginning of May. It was all very fast. If you only have such little time to prepare, you inevitably have some hiccups.

Out of the 270 initiatives, some bigger organisations (Timelab, Kerk, Democrazy, Totum, and Nucleo ) with more experience carried the process and they are still in the general management. Timelab, for instance, was already a facilitator of opening spaces. Other organisations also had experience in temporary use projects. None of these organisations would have been able to fill the entire building, therefore they joined forces and organised out of the 270 proposals a group of people and initiatives that really wanted to participate. During this process we saw about 10-12 different typologies emerging. Some people wanted to organise activities with food, others with creation or sports: they all got their space in the building according their typologies and they all participate in the decision-making.

What was your concept for the uses of the building?

This is a huge building, there are functions that were determined; we had to have more than 50% community activities. In combination with this we also divided the general costs among the different typologies: the less commercial/profitable (and more socio-cultural) initiatives weighted in less in the general cost of €7,000 and the more commercial initiatives participated more. Like this everyone gets a shot to build out their own thing, even the less commercial viable ideas.

How did you organise decision-making with many different initiatives?

The plan in the beginning was to work with a purely sociocratic model, with small groups corresponding to the typologies and having their representatives in the general management. But as everything went so fast and we started from nothing, no one knew each other, there was no real structure yet: we noticed after two-three months that this sociocratic model created a gridlock, we just had meetings about meetings. It was not going forward: we had to change things a bit.

We changed the general management from completely horizontal with horizontal with some ‘bumps:’ each typology still has its own representative and has the option to participate in the general management if they feel that something is not going in the right direction. But we gave the general management more outlined tasks and responsibilities, not everything had to go through everyone, there was now a smaller group that decided on particular points. We still have meetings within the typologies but with less critical discussions: those decisions are done by the general management. For the legal structure we used a sleeping cooperative which at that point had no other projects running. We all became owners of the cooperative, we all bought the shares in the company and we all have say in the general owners’ assemblies. It is in all of our interest to make sure that things go well. If the project ends up with losses, our share devaluates as well.

Did the building need a lot of investment to be useable for you?

It was a library before but it was not the ideal building to be a library either, it was strangely organised. The building was not made for the things we do here either so we needed to reorganise but we did not change the structure of the building. In fact, we could not change anything structural in the building: a lot of elements, like all the marble, the wooden elements, the ceiling, the toilets are all protected heritage. The electricity supply for some floors had to be changed, for instance. Changing the locks was a big investment, too.

What is your financial arrangement with the municipality?

We do not pay rent but we pay for the use of electricity, water and heating (it is a steam-heated building). It is a fix sum, €7,000, that is defined by the city according to estimates based on previous years.
To cover these costs we ask users to finance a part of this amount, because of the temporality of the project it is difficult to ask for full rent from the users. At the same time, we want to give opportunities to social initiatives and most of the time they do not have the funds that private initiatives have therefore we adjust the pricing here as well. We defined the rental fees by how much space an organisation uses and how commercial it is. For example, the offices that are purely commercial, together with the bar and the restaurant, contribute more than 60% of the total costs. Other organisations pitch in a bit less. The more social, the more creative initiatives are, the less they pay for the general costs. If we organise events, the surplus that each typology generates (above the fee to be paid to the cooperative) can be kept by them and they can choose to offer cheaper space for their tenants. Our work involves more and more event management: many people want to organise events here. It is useful as there is place for the extra money we can earn with events but it slightly changes the focus of the building.

What are the activities in the building?

The building now hosts about 50 different projects. At the entrance we have a lobby. In the beginning we had some problems with vandalism, theft. Partially because we kept our entrance open and free and empty from 8am until 1am, people had the feeling that there is no one here and they can just do whatever they wanted. Therefore after three months we decided to tackle the problems of the front entrance by putting a lobby where first there was nothing. It helped to create some control over the entrance space. We also have a changing pop-up shop with local products that creates a bit of food traffic here. We moved the main event space, the city saloon to the second floor where it hosts various cultural events: as a result, there is less to be vandalised in the ground-floor spaces.

In the office area, we wanted to create a mix of start-ups, established companies and social non-profits and we succeeded: we have Oxfam and more than five start-ups here.

The former canteen on the 1st floor is now a bar, a general meeting point. We tried to include as many people as possible in its design. Some of the furniture, for example, that we use in the bar, was made by different people in a workshop about Enzo Mari-design. When the bar will close these people can afterwards claim their chair back.
Other furniture throughout the building has been made a group of design students from all over the world in August, during a summer camp called MEDS. A floor higher, we have a room for events: performances, concerts, theatre. We also have a music studio on the third floor that is very affordable: many street musicians record their songs here and make their first demo. The manager of this space really wants to give an opportunity to people. The gear that is in there is contributed by musicians and everyone can use anyone’s gear. A co-working platform for music.

On the 2nd floor there is like a living room, a place where people can chill. It is managed by an NGO that works with youth. In this neighbourhood a lot of youths come together because a lot of the trams and busses from the outskirts of Ghent have their stop here, so we tried to give the kids a space to meet up and bound.

The 4th floor is mostly about working spaces: some people are sewing, weaving, refurbishing clothes, and there is a painting studio. People come here during the day, they do their work and during the weekend there are often workshops organised by the hosts of the workspace. We have a painting workshop every Saturday morning, sometimes they also do knitting workshops.

The 5th floor hosts the room of silence, a space within NEST that offers people to come here for a complete rest. It is hosted by a Flemish organisation for autism. They designed it in a way that people get as few impulses as possible; when people with autism get too many impulses they have a hard time filtering them. You can really have a rest here. It is not only for people with autism. Students come here to study. Anyone can come here.

The last and 6th floor is the restaurant: this is the only floor where hot food preparation is allowed. The restaurant concept is that it hosts different aspiring initiatives and give them a shot to try their new restaurant or food concept. For most people it is really hard to start a restaurant, to do something, spaces are very expensive and require a lot of investment: for beginners it is very hard to start off. The first girls here from the company Haiphong Happiness started their concept here and they just opened a shop in the city. Here also a non-profit that wants to bring real food and people back together saw its. They do workshops about making micro vegetables, give lectures, do meet-ups, make mushrooms, etc.

What will happen when this temporary use period is over?

There are people who are very interested in continuing in a different space but I already checked on private markets for my own project and in a normal building it is not possible to offer as low rents as here: the market price is too expensive for many of our tenants. There might be other municipal buildings available that would be useful for us: if you give a social swing to temporary use, it is harder to do it within the private market. We would need to double our prices in the private market. But NEST will always have an important legacy in the city.
New relationships were formed, new partnerships set up, different people got a shot at perceiving their ideas and dreams and experiences were gathered.

Interview with Raimi Möller, co-manager of NEST on 10 November 2017