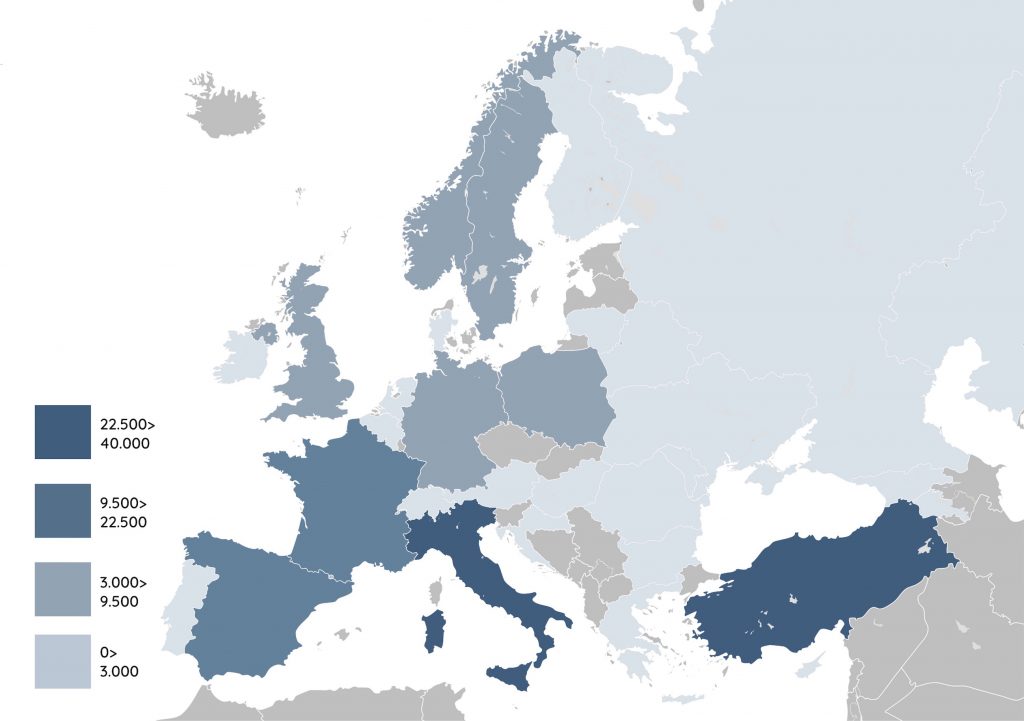 While decisions taken in Bruxelles are increasingly recognised as affecting our daily lives, little if any discussion is taking place on what our impact on decisions of the European Commission may be. As a contribution towards the 2019 EU elections and to the post-2020 funding debates, this article wants to highlight some of the messages from cities and neighbourhoods that should be heard by EU policy makers.

In 2017 Europe is still experiencing the aftermath of the 2008 economic crisis with its austerity measures, a sharp disparity in the distribution of wealth and resources amongst the population,, and the dismantling of the public assets. It is not an easy time. As a result of these challenges, after 2008 all around Europe many citizens started taking the situation in their hands and delivering various forms of self-organised local solutions: community kitchens, gardens, self-organised education and cultural spaces have popped up everywhere spontaneously as parts of emerging networks of community-run infrastructure and services.  Recognising the potential of these initiatives, many actors, especially local public administrations, have built up cooperations with them in the attempt of supporting their scale-up.

Today, many of these civic-public cooperations are often at a prototyping stage: small and marginal if not even disorganised at times, making it hard for some people to see them as veritable engines of change. Many of these civic initiatives struggle to go beyond an initial project phase, lacking stable policy support as well as human and financial resources. In fact, whilst many public and private funds are available for start-up companies in the IT sector, often with a very low success rate, little support is provided to emerging social and community services and infrastructure. Nor can these initiatives access funding from banks, as their organisational structures and economic plans are not fully understood by traditional financial actors. The governance of these community resources and infrastructure is often too fragmented, with limited cooperation and resource-pooling from the side of civic initiatives.   Public institutions at various levels, from the EU to local administrations, are often disconnected from the civic environment and lack skills and adequate policy frameworks to enable civic-public cooperation. Public-private partnerships have been dominating urban development in the past decades, but what is the role and potential of public-civic or public-private-civic cooperation?  In many cities across Europe, there is limited contact between politicians, municipal officers and civic initiatives.  Many public administrations function as closed hierarchical structures and fail to reach out to citizens   How can people in different positions learn new ways of cooperating?

In terms of practical implementation of policies, thematic domains of the EU Urban Agenda discussion tend to be isolated, with different themes addressed individually: planning mobility without thinking employment, housing without energy, food without education has a limited capacity to improve our cities. After a long period of public budget cuts, vanishing trust and exploitation by large private players, many city administrations in search of strategic allies started looking with interest at collaborating with civic initiatives. Civic initiatives, in turn, have seen the possibilities in  administrations sharing resources, competences and political leverage to support their causes. But not everyone sees the same benefits in public-civic partnerships. In fact, some administrations see in this cooperation the possibility of “dumping” citizens with responsibilities without sharing resources, power or recognition whilst certain civic groups saw the possibility of receiving public funding on a regular basis to support their activities, if not even private benefits from politicians in some cases. Despite the existing negative aspects that such experimentation might entail, there has been also many valuable results on which we should capitalise.There is a lot happening in our cities, villages and rural areas, but the big question is how to scale up, towards which vision and with which responsibilities. This is a time of awakening towards new possibilities.

Based on some of the emerging models, we can say that to reach such scale-up the collaboration between all parties, through a quadruple helix approach in needed: civil servants and politicians, researchers, civic initiatives, corporations and social enterprises… Over the years, the citizens’ involvement has proven to be essential to:

Some administrations picked up on the potential of a more fruitful collaboration and tried to support these initiatives with some legal advise, expertise, infrastructure and even financing at times.

BIP/ZIP is a pioneering strategy by the Lisbon Municipality’s Body of Housing and Local Development, promoting partnerships in the city’s priority neighbourhoods. Besides establishing local governance structures that facilitate communication and shared decision-making between the public administration and neighbourhood organisations, BIP/ZIP also includes an ignition funding programme for community partnership initiatives with a strong local impact. Beyond hundreds of interventions at the neighbourhood level, one of the offsprings of the BIP/ZIP programme is Lisbon’s Community-Led Local Development network, an EU-funded governance scheme including over 150 NGOs, private enterprises and the local government.

Athens Municipality’s Synathina map of social initiatives, initiated in 2013 with funding from the Bloomberg Mayors’ Challenge , teaches us that in order to renew their practices, authorities need to learn from civic initiatives, recognising the values of bottom-up undertakings and adapt their regulations to support them. In order to maintain their leadership, municipalities need to help connecting supply with demand, by making visible unrecognised resources and enabling cooperation between different actors. To fulfil their public duties, local governments need to enable community organizations to develop neighbourhood services. To engage their citizens, administrations need to open the doors of their unused properties and accommodate innovation.

In more nourishing context some of these initiatives can transform themselves into social enterprises, therefore still focusing on the social cause but with an economic stability that ensures a fair employment. The issue of creating job opportunities is an essential aspect to ensure social cohesion, aside of other integrative solutions, such as the basic income in its various forms. Whilst it can be recognised that there is an overall trend throughout Europe to create active citizenship initiatives, there is no overarching policy at European level to promote them in the urban context, as urban planning is not a competence at European level, although their impact is the strongest in the urban arena. In fact, even though decisions on land use may remain a responsibility at local level, aspects related to employment, health, education, housing, migration or digitalisation are all aspects heavily regulated from the EU but without any consideration on the way in which these policies and related funds are then organised on the territory. Although the ongoing work on the EU Urban Agenda, approved as a result of the Dutch EU Presidency in 2016, is a valuable effort towards territorialising EU policies, the work carried out by the twelve thematic partnerships is still distant from people’s everyday’s lives, even though it aims at reflecting on it. Housing, Circular Economy or Urban Poverty are surely aspects that affect inhabitants’ lives, but up to what point is the work carried out by the Urban Agenda Partnerships related to daily choices being carried out by local public administrations?

The two instruments promoted by the 2014-2020 ERDF Regulations towards sustainable urban development, as part of the Cohesion Policy, have proven to be extremely difficult in their implementation due to high bureaucratic thresholds and limited skills in the human resources of administrations, yet their potential should not be fully discarded. In fact, Integrated Territorial Investment (ITI) and Community-Led Local Development (CLLD) offer the possibility to urban areas, from metropolitan to neighbourhood scale, to experiment new forms of integrated and inclusive planning (European Parliament, 2016). The Article 7 of the ERDF Regulation for the 2014-2020 period, foresees the achievement of Sustainable Urban Development through the investment of at least 5% of the budget of each Member State. The same Article 7 introduced the Integrated Territorial Investments (ITI), which provide integrated arrangements for investments under more than one priority axis or more operational programmes, to make a coherent strategy for a certain territory or functional area. Another valuable instrument identified by the ERDF Regulation is the Community-Led Local Development (CLLD), a tool for involving citizens at the local level in developing responses to social, environmental and economic challenges. The peculiarity of the CLLD instrument lies in the fact that it requires a mixed stakeholder group (public, private and civic) to manage the fund and no stakeholder may withhold more that 49% of the votes, thus ensuring a democratic and transparent management of resources. The complexity of the instrument, the administrative capacity and the democratic assets, especially in the CLLD, have been a burden for the implementation in most cities. Was the ambition wrong or the instrument not properly fitting the purpose? Whilst there is a debate on the possibility of abolishing such instruments in the upcoming post-2020 funding period, there is also some ongoing discussion on the possibility of simplifying the procedures through a Block Grant for Urban Authorities, as proposed in action plan of the Urban Agenda Partnership on Urban Poverty.

Based on the ongoing trends taking place in cities and urban areas today, future achievements of EU policies on territorial development seem to pertain to five main enabling elements:

Europe is heading towards two key moments (Brexit it not directly one of them!): the 2019 EU elections and the 2021-2028 funding strategy. Both would require a strong civic involvement in order to effectively promote change within the European Union, are we getting anywhere close to that?