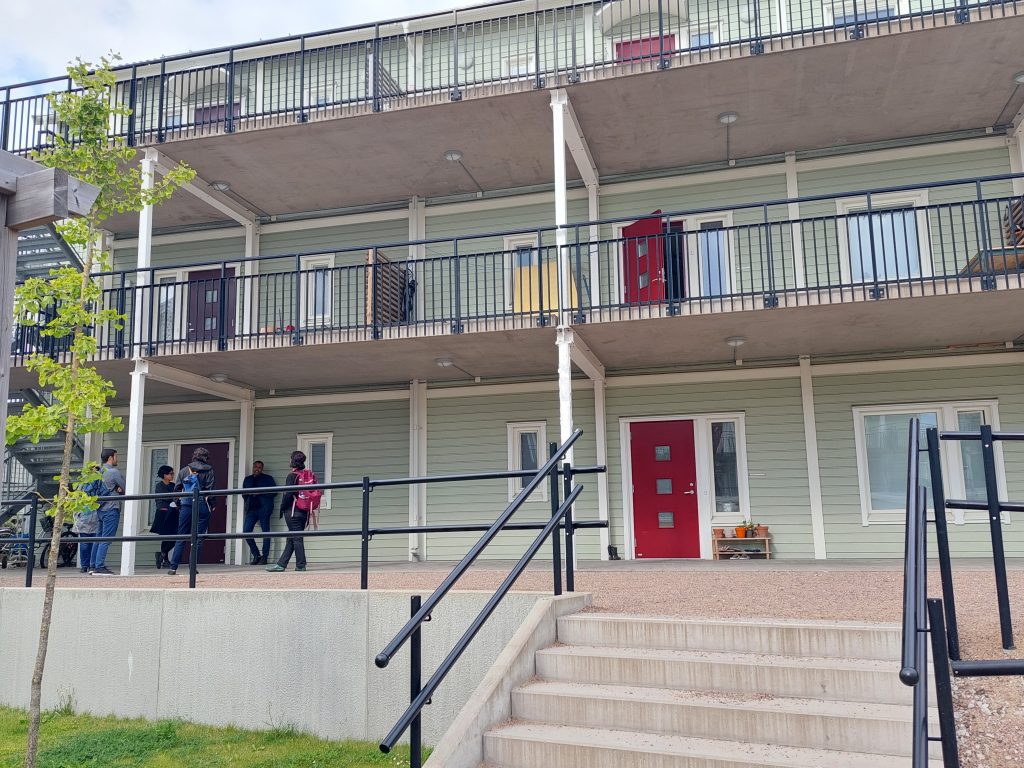 The blog presents an initial reflection on emerging challenges that the influx of refugees from Ukraine – about 7 million people since 24 February 2022 – poses to cities and their housing infrastructures. Based on a recent exchange convened within the framework of the JPI-funded research project HOUSE-IN, it focuses on the project’s case studies (Riga, Vienna, Leipzig) and Warsaw. Cognisant of evident differences in refugee numbers and responses across the four countries, the blog discusses the role of humanitarian and state actors and that of grassroots and migrant-to-migrant solidarity, crucial in navigating a volatile and unplannable situation for the urban context. It raises questions around so-called compassion fatigue and its different facets, amongst trauma and loss; issues of temporality vis-à-vis austerity urbanism, inequality and precariousness; and around double standards and the enduring issue of racism at the core of housing and welcoming culture in Europe.

Referring to the influx of refugees arriving at Europe’s borders in 2015, the network Housing Europe suggested that ‘we don’t have a refugee crisis, we have a housing crisis’ (Housing Europe, 2016) that intersected with a crisis of welfare and the intensification of neoliberal practices, including privatisation and financialisation of housing (Soederberg 2018). Six years on, history repeats itself. However, the current housing crisis is also distinct, as it involves a different political context, geographies and relations of proximity. Numbers are quite different, too. It is reported that more than 4 million refugees crossed from Ukraine into Poland between February and June 2022 (Polish Border Guard 2022). Estimates suggest about 2.8 million Ukrainians are currently in Poland. 30,000 people have entered Latvia, around 70,000 Austria, and 750,000 people into Germany. Back in 2015 it was unthinkable that European countries were able to accommodate these numbers.

Another element of difference is the unpredictability of the Russian war against Ukraine, which makes it difficult to understand when, how and if refugees will actually seek refuge in third countries or will return home. An estimated 1.5 million Ukrainian have probably already returned to Ukraine. But the majority have been accommodated in private houses. In Poland, Austria, Germany and Latvia, as in other countries, people have opened their homes, marking a show of solidarity and care which equals, if not furthers, the civil society response in 2015. Within the void left by regimes of austerity urbanisms, such a strong role and effort displayed by people – and humanitarian organisations behind them – is entirely positive and fundamentally needed. Short-term fill-the-gap strategies are, however, already revealing their limits and, as the situation drags on, imperatives for state institutions to play a stronger role and for longer-term provisions increase, to reach a “much fuller register of the multiple modes of dwelling and inhabiting” (Powell and Simone, 2022, p.838). Civil society organisations in some countries have already “raised the alarm” to governments, calling for longer term housing strategies beyond the emergency response.

Four months after the beginning of the war, ‘compassion fatigue’ is already reported. Such fatigue is experienced by refugees and their hosts, and it is imbricated in the manifold paradoxes and contradictions of hospitality and care. Refugees are casualties of care (Ticktin 2011), and Ukrainians are no exception. If access to safe accommodation and housing is mostly governed through the exceptional principle of compassion and left to a common sense of obligation – whether found within grassroot solidarity or humanitarian intervention – the risk is to erode what we otherwise conceive as a universal right (to housing).

Finally, and more importantly, this current crisis, compared to 2015, demonstrates how housing, as a socio-material infrastructure, is governed by selective solidarity (Magni 2021) and double standards (Sanyal 2015) that expose the colonial, orientalist and essentially racist nature of migration management and welcoming culture within European societies. Comparing the kind of policies set up by the EU gives an idea of such racist double standards.

While during the crisis in 2015, most policies were highly restrictive, aimed at the externalisation of asylum procedure, at the closure of borders, and criminalisation of migration; with respect to the current crisis, the Commission has enabled an open border policy, removing the need for visa or residence permits, issuing funding, although within a limited timeframe, for housing and subsistence.

A cruel manifestation of racism appears to be present also in the local management of migrants and in grassroots responses. Differential treatments between white and non-white refugees fleeing Ukraine are reported, including African students left waiting indefinitely at the border, and Roma people abused in refugee reception centres (Njai, Torres and Matache, 2022). In Poland and Latvia, people have opened their homes to Ukrainians, while pushbacks of Middle Eastern and African migrants at the border with Belarus continue, resembling what happened in Italy and Spain since 2015, with the acquiescence and participation of Frontex.

Double standards are seen in housing, too. Our research has found that many of the people willing to rent out a flat or temporarily share their private space will do so only for white Ukrainians, e.g. in Leipzig.

Refugees fleeing Ukraine can access housing via expedited routes, while long-term asylum seekers remain on waiting lists. At all levels the system favours and reproduces distinctions between wanted and unwanted, between bodies that qualify and those that do not.

Those working on the ground are trapped within the reproduction of white privilege and the danger of playing off different groups of vulnerable people against each other or bringing them into unnecessary competition for empathy, support and recognition.

A closer look at the situation

The Ukrainian population in Warsaw and its vicinity is estimated at 300,000-350,000, or 12% of the region’s total population. Most were family reunifications, the reason why the influx did not yet generate a housing crisis. For refugees, Poland is a transit country, with approximately 1.9 million refugees moving on to other countries or back to Ukraine. Across Poland the solidarity response from civil society and grassroots organisations housed an incredible 600,000 (approx.) refugees in private homes. Yet, there are limits to relying on short-term approaches. Predictions that many Ukrainians will return to and settle in Poland for winter raises questions of longer-term housing and the challenge of educational provision for 600,000-650,000 Ukrainian children within Polish schools. ‘Compassion fatigue’, ending temporary funding schemes and autonomy desires of homeowners and refugees alike, make existing support systems fragile – says Maciej Duszczyk (University of Warsaw).

Approximately 40,000 people from Ukraine have registered in Austria in the first quarter of the year (Statistik Austria 2022). Recent data suggests many have since left. Language or administrative barriers, as well as distance between Ukraine and Austria, do not make Austria a preferred destination. However, forecasts that around 200,000 more people could arrive in Austria, half of which in Vienna, make housing a significant challenge (Haas et al. 2022). Vienna’s affordable social housing system is solid but, as Bahanur Nasya (Eutropian Director) argues, it works for many not for everyone. Newcomers cannot access social housing but rely on the tight private housing market where prices are soaring. The majority of recent refugees have entered this market. However, contracts are oftentimes precarious, increasing newcomers’ vulnerability. The local government set up a stock of houses for the refugees. Yet, similar to the case of Warsaw, “welcoming culture stops at a point”.

It is estimated that Riga has received around 10,000 people from Ukraine. Data however, is limited as to how many people stayed in Riga, how many moved to other cities. So far, the municipality has provided accommodation for around 1500 people. As Ieva Raubisko (University of Latvia) explains, Latvia has adopted a Law on Support to the Ukrainian civilians, in-line with the EU Temporary Protection directive, which stipulates a support package, including housing assistance. The support period was extended from 90 to 120 days in May 2022, following pressure from civil society organisations and municipalities on the government. Three types of housing support are now available: monetary support for rent and other expenses, based on a lease agreement between the owner, municipality and tenant; financial support to municipalities that accommodate refugees in their buildings; support to private owners who offer housing free of charge. All have caps. In another initiative, a public database was created for private owners to register properties available for refugees. So far, registration has been limited.

Leipzig has received around 9,000 Ukrainians and is also a transit city. Ukrainians can stay for 90 days without a visa. Registration, however, offers access to social benefits for up to a year. The tight housing market and insufficient adequate low-cost housing has hindered efforts to enable asylum seekers to live in flats instead of in group or mass accommodation (e.g. Werner et al. 2019). Still, 80% of Ukrainian refugees live in private accommodation, the rest in group accommodation houses, hotels, hostels or emergency accommodation, comparable to arrival infrastructures setup in 2015 (Stadt Leipzig 2022). Response initiatives included free local transport for Ukrainians and bureaucratic processes were simplified and streamlined. Still, racism and discrimination have equally emerged. In terms of housing access, Anika Schmidt (Helmholtz-Centre for Environmental Research) argues that there is a huge difference between refugees with Ukrainian citizenship and those without it. Private owners have been known to open their flats only to refugees from Ukraine. In turn frustration has increased among refugees from other countries, resident  for a longer time, who face greater restrictions and less support. Many wait to access the housing market, while Ukrainians are offered faster routes.

All cases point at common issues related to the politics, materiality and temporality of reception, accommodation and housing. The situation is volatile and difficult to plan for – there are no policy provisions to accommodate everyone in the long-term – despite the existence of an arrival infrastructure in certain cities since 2015.

Housing is treated as a commodity not a right; austerity urbanism has eroded welfare systems; benefits exist but operate on exclusionary bases. Funding will end soon – then what?

The response to the current crisis has shown great levels of solidarity from the ground-up, including migrant-led ones – and the burgeoning role of humanitarian actors taking over state roles, especially in housing provision, our research has found. This could lead to incredible outcomes: new types of relations and governance arrangements. While care and solidarity give us hope in a time of crisis, it also risks depoliticising the housing struggle in the city. More than anything else, this current housing crisis, and related response, reveals in all its brutality the inherent colonial racism deeply embedded in the management of migration and provision of accommodation, and in the housing system itself.

This blog post was first published in the blog of The Bartlett Development Planning Unit of University College London on 20 June 2022.

Ticktin, M. (2011) Casualties of care. Immigration and the Politics of Humanitarianism in France. University of California Press.