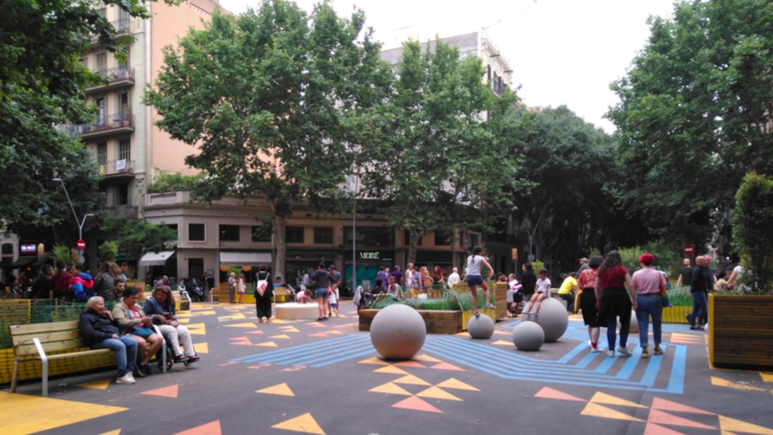 Xavier Matilla, Barcelona’s chief architect and Silvia Casorran Martos, deputy chief architect, visited Budapest at the invitation of Eutropian, the Hungarian Contemporary Architecture Centre – KÉK and the Instituto Cervantes de Budapest to share Barcelona’s recent innovative urban development plans. Xavier Matilla and Silvia Casorran Martos, together with the city’s Urban Ecology department, had a pivotal role in the design and implementation of Barcelona’s current urban regeneration programmes. In his lecture, Matilla shared with the audience the three main principles of Barcelona’s vision for the transformation of the city: increasing green space; pedestrian and bicycle mobility; and creating public spaces that foster social connections and collaboration. Superblocks are neighbourhoods where traffic is diverted from side streets to major roads, opening up entire streets to pedestrians and cyclists. The main aims are to reduce air and noise pollution and create more open space for citizens to connect. There are currently six superblocks under development in Barcelona, nevertheless the municipality aims to scale up the project and transform the entire city of Barcelona as a Superblock.

The following text is an edited transcript of Xavier Matilla’s talk in Budapest on 3 September 2021.

Barcelona is a big city in a small place. The city’s population is 1.7 million, more or less the same as Budapest, but the surface area is only 100 square kilometres while Budapest is 500 square kilometres. We can see that Barcelona has extremely high urban density, it is a very compact city.

Engineer Ildefons Cerdà’s expansion plan in 1859 for a large, grid-like district outside the old medieval walls, called Eixample, consisted of a grid of streets that would unite the old city with seven peripheral villages and connected territories that are beyond Barcelona’s rivers. These plans defined how we would see the future of the city. Twelve new urban centralities were set up in 1992 for the Olympics Games to generate a new balance between the different parts of Barcelona’s urban fabric.

In contrast to some cities such as New York or London, Barcelona does not have big parks: it is a city of streets. The street is our basic public space. Therefore, to improve the social and environmental conditions of the city, we must improve the conditions of our streets.

We are working on a new urban model, defining a new paradigm. Our challenges include air pollution and climate change with the city suffering heavy heat waves in the summers. Barcelona’s low level of green areas exacerbates the problems. This summer has been a summer that we will always remember, we saw the real impact of climate change. It is a serious problem. All the urban policies we are trying to develop in Barcelona are oriented around the climate emergency. In 2020 the City Council actually declared a climate emergency and defined important policies to change the urban models including the energy and consumption models of the city.

We also have a big challenge with tourism. Before Covid, we reached 12 million tourists per year. It is calculated that there are half a million tourists a day in Barcelona mainly in the central area. Tourists are concentrated in the city centre which has a large impact on housing prices.

We have a city with inequalities between different territories but we want to reduce these inequalities and we also know that we can not improve the conditions of the city if we don’t improve the conditions in the countryside. To develop our city, we need to ameliorate the conditions of our planet, of our countryside from where the food and energy are coming from. We need to balance the different scales we find in the cities. We will continue being a global city but we need to balance the global scale with the human scale. We are working hard to recover the human scale in our cities.

What are the three main strategies in public space projects and transformations? How can we increase nature in the city? How can we generate shorter distances? We need to put things closer to generate the human scale. Can the city be a collective project for everyone instead of a project defined top down? We need to foster collaboration in our city. The transformation of the city to foster the human scale is based on these three main strategies.

How to generate more green areas, and improve environmental quality? How to generate new conditions to make our city a more resilient one? We need to introduce nature everywhere. We have a green infrastructure and biodiversity plan. Every space is an opportunity to introduce nature. We now introduced the city’s Nature Plan for 2030 which is a new roadmap establishing that planning and management for greenery must be more diverse and abundant. It aims to generate a new system with green corridors. Some of them have already been executed.

How to transform what used to be a road into a street with pedestrian and bicycle traffic? There is the example of les Glòries park which was a central area in the middle of the Eixample at the junction of the three main axes, isolated from other neighbourhoods with a large roundabout, dominated by road traffic. This has been transformed in the last few years. The roundabout has been demolished. A park will be created with a playground and an area for sports. In terms of transport, the goal is to connect two tram lines to give priority to public transport. Priority will also be given to biking and to increase as much as possible the green areas by reducing car lanes.

How to generate conditions for proximity, short distances, new mobility?

As Jaime Lerner taught us, the smartest animal is the turtle, as it can work, live and move in the same position, it doesn’t need to go far to get everything. This is a good idea to apply to our cities. We aim to develop territories where we are able to develop daily life with facilities, working areas and retail. Proximity starts with housing. We have had a problem of affordable housing, not just because of the tourists. There was never a public policy to generate public housing stock so we are making efforts to increase public housing trying to discover faster mechanisms to build new residential housing. Some of the most innovative projects in Barcelona are building houses with shipping containers, (APROP Project) which is a cheap and fast way of constructing new housing. We also need to improve the housing projects to increase community spaces between the buildings to generate a sense of community.

Barcelona is already a short-distance city because efforts were made in the 1980s and 1990s to have a good distribution of facilities such as libraries and social facilities across the city. But when we are talking about proximity we need to make it easy to reconnect with public spaces and generate an emotional link with the city.

In a way we need to recover our streets. In the lockdown when we diverted car traffic, we were able to smell fresh air again. Suddenly we realised that we lost some important things like animals and clean air. The main streets were liberated from cars and even a piano was moved in, and on Sunday mornings it was a magical moment to listen to people playing a piano in the middle of the street Aragó where you normally have lots of cars going by.

Finally, when we talk about proximity it means we need to define a new mobility system in our city. We need to reduce streets occupied by cars and give them other uses. The project that encapsulates the three main aims of urban regeneration in Barcelona (naturalise, create proximity and cooperation) is the Superblock project. Since their introduction in 2016, Superillas have proven to be very successful. The transformation is positive, we reduced noise and air pollution, we boosted commercial activities in these areas and there has been an important environmental transformation due to the dominance of pedestrians and bikes.

We can transform the urban fabric of the city. We can define the map of which streets we would like to transform to be green and without car traffic. We think Superblock Barcelona is a great opportunity to generate this new environmental approach.

If you have a systematic vision of the city, then it is easier to tell people how you envision to transform the city. With the Superblocks the priority was to understand the environmental conditions of the city. We identified the worst areas for air and noise pollution so the idea was to tackle the worst area first.

Eixample is the district of the city that has the worst environmental conditions with the most car traffic: 350,000 cars are passing through the area every day. The impact on air pollution is high. So we identified that this area needs an environmental transformation and we identified 21 streets that we think we are able to transform into green, pedestrian streets. We are planning 21 new squares instead of junctions between the streets for people to play and spend time in. They make up about 2000 square meters.

We need to define a new typology of the new streets: they need to be environmentally structured, they must be able to manage the water cycle, define new environmental conditions, reduce temperatures in the streets and there has to be a transformation that improves social activities in the area. We need the transformation of a 3D space. We want to plant bigger trees so we need to transform the subsoil for them, with more capacity to retain water and keep its fertility.

We need to think about those groups such as elderly, children or disabled people who are often forgotten. We need to have a new public space design for them too.

Another project that shows the idea of this transformation using tactical urbanism is our work with the areas around schools. We don’t have much time to transform our cities so we need to discover new tools that allow us to work faster in these transformations. Focusing on schools is a very good strategy because schools are a facility that is best distributed around the city. If we are able to improve the conditions of the surroundings of our schools, then we can then improve the conditions for the whole city. It is a strategic approach, improving the surrounding areas of the schools to generate a systematic transformation of the whole city. In Barcelona we have about 600 schools. The project will be rolled out with up to 200 schools between 2020 and 2023. Priority will be given to schools where air quality is poorest and those which are most vulnerable in terms of road safety.

These are low cost interventions to carve out space from cars, and we are also working together with designers designing new urban furniture to improve the school areas. During the pandemic when the outdoors had more emphasis, these outdoor spaces were very useful. We also aim to introduce different actions to boost spontaneous games for kids to play and we are working together with school communities identifying what their needs are.

Cities reflect what we are able to do together. So it is very important that every transformation is understood by everybody. The first time the city council transformed an area with a Superblock, people didn’t fully understand it: it was useful to share with people the idea of the project and to receive different points of views in order to generate new collaborative ideas. Actually in this first period of the Superblock’s concept, we had a lot of opposition, but attitudes have shifted and now all neighbourhoods are asking for a Superblock in their area.

We try to be innovative in the tools we are using in participatory processes. Our open source digital platform Decidim is there to make it easier to participate and collaborate in different processes from small public space transformation to participatory budgets. It has been implemented by different cities in the world.