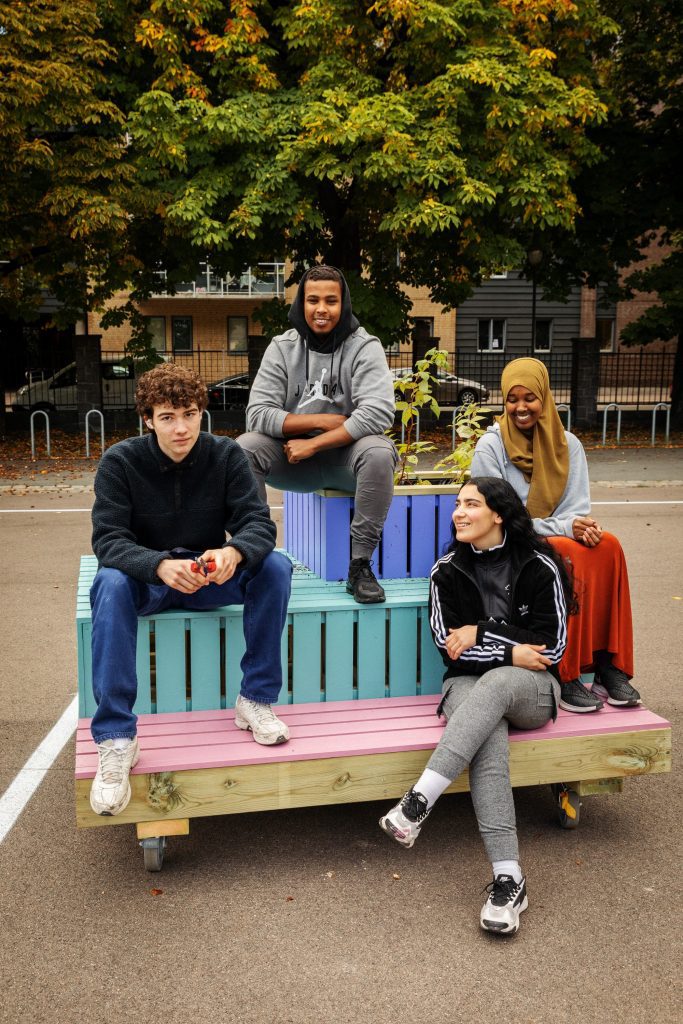 As part of the European project called PlaceCity, placemaking for sustainable, thriving cities Nabolagshager established a collaboration with H20 High School in Grønland, Oslo to empower and facilitate the students to create inclusive meeting places in Grønland, Oslo’s most diverse district. The area has significant social challenges such as high child poverty rate, high unemployment rates and very low participation in organised leisure activities. The quality of the public spaces in Grønland was low and there was a lack of after school and spare time activities for youth in the area. The school has a high proportion of immigrant background students, with low academic test scores and has one of the highest drop-out rates in Oslo. Through placemaking and creative participatory methods, the students themselves identified issues and needs and implemented short-term placemaking interventions to address them. Cooperative City speaks with Clara J. Reich, who together with Laura Martinez Izquierdo co-managed the project of the Oslo case in the PlaceCity project.

Working with the school

Nabolagshager, an organisation that works with the social aspects of sustainable, urban development has known the H20 school for a couple of years through recruiting youth for our projects. H20 used to be a middle school and had a really bad image with lots of fights but later the school’s form changed and it became a high school that focuses on entrepreneurship classes and is striving to become an educational hub. We knew the school was really open to try something new to improve the student experience.

Through an open call  with our partner the Oslo Living Lab we wanted to create an internal student research team who would be working on exploring the issues and solutions. At the end of the application process three students were selected to make up the research team.

The research team’s main task was to get a good idea about how the students used the space and what they wished for. The team worked with participatory methods to interview their peers and had mapping activities to explore the potentials of the school yard which was a large space but not used much. Included in the methods was a survey with about 60-70 students who gave feedback.

The youth research team collaborated with me and a postdoc team member who helped with the research design and surveys and I trained them in the methods and explained why we were doing it as it was something completely new to them. They were really impressed that they are contributing to a youth project and that their research and feedback matters.

As time went on they got more and more critical on how to improve the methods and the research. It was really nice because one of the youth said she got better grades as she really understood through the process how to structure her writing. The other one said she felt much more prepared in her work life using all these digital tools such as clouds.

Also the research activities gave them a new outlook on careers. Often they would know the traditional role models like lawyer or doctor but through the research they saw you could be part of humanities, like a research doctorate or work in a youth project. It opened up a new horizon and perspective for them. They grew a lot and became very independent.

The issues to tackle

Based on several interviews, a survey and workshops we found out that students and neighbours wished for more activities and nicer spaces to hang out. A lot of students wanted to spend more time at school in after-school hours because they live in overcrowded apartments.

In collaboration with an urban landscape master’s student, Ingeborg Njøs Slinde, we developed the pictogramming tool and tested it with our youth to get a better understanding of the perception and use of the schoolyard and the neighbouring streets. They wanted the school yard to be lighter, more safe and more inviting. There was also some drug sale around the school that made the school yard and the street around it undesirable.

We talked a lot to the neighbours and our network and they really enjoyed the idea of the place being more liveable and for the community with a bottom up approach. We wanted to make sure the process of transformation is grassroots and community oriented. We identified that the goal of the project was to create a more social, green, liveable space at the high school and to achieve that with community engagement of the students and the staff especially the students but also the neighbours.

One of the concrete interventions was the light installation in the schoolyard in collaboration with the Oslo Living Lab. It was the outcome of a four-week workshop with design students at the Oslo School of Architecture and Design. They organised workshops at the university, where the students experimented with different materials for the installation and digital tools. The light installation was super inspiring because it gave such a different atmosphere to the school and it was the students who were participating in its creation. After the installation was finished we even developed  a manual on how to do light intervention.

A variety of pop-up cafes and pop-up street parties were organised. The pop-up cafés were co-designed with artist  Paco Inclán from Spain. At first we loved the idea but we were a little concerned because Norwegian culture is a bit more distant. What works in southern Europe where you add music and chairs and people would just show up might not work in Norway. But we tried it and it worked surprisingly well! There were drinks and food and some of the youth from Oslo Living Lab were in charge of organising it, they DJed music the students liked and came up with activities. Because of their student- oriented perspective, it was a very successful event. A pop-up tool manual was also produced for anyone wanting to organise their own pop-up event.

From the research we knew that the students had wished for more colours, sitting places, and plants in the schoolyard. We collaborated with Makers’ Hub in Oslo that specialises in participatory building and they are really great at engaging young people. Makers’ Hub are really good at teaching the youth how to use a saw, use tools and build things themselves. They did an amazing job. They were tasked to work with the students and created bright and happy pop-up furniture with integrated planters that contain berry bushes and flowers. People loved it. A local skater even used the schoolyard at night for a photoshoot. The students were really happy to have the furniture as well as more plants.

We got funding for sunflower, tomato and berry bush planting in the garden at the schoolyard. We also gave away the seedlings so people could plant them in their balconies or community gardens in the area and contribute to biodiversity and to meeting places. We also planted berry bushes as it is a big part of Norwegian culture to forage berries. It is super cool to be in downtown and still be close to nature. You could just go there and pick berries. We hope that some of the kids and neighbours will also pick berries where we planted them.

The impact on the students

We hired some youth to do the pop-up furniture and they were so proud that they created something from their own hands. It was fun too to see these young people who never held a drill in their hands in their whole lives and they could actually build stuff. Seeing the students feeling empowered, knowing they can take responsibility, change things and make an impact are what inspires me most in this project.

Knowing that the research team worked so well, I think we would have given them more responsibility during the research and more freedom in choosing which methods to do.

It was really difficult organising public events with Covid. Because Norwegian winters can be very cold to be outside, such interventions can be challenging. We are happy with what we achieved.

We are also planning a project with the human geography class where students would explore the district through guided walks and get to know all the nice spaces and spots. We would also teach the students about mobility, walkability and tactical urbanist interventions.

Together with the student council we produced a hand book which will be shared with all the student councils in Oslo. We want to share our knowledge and empower young people to start similar processes including learning about funding sources, tips on storytelling, creating strong alliances, and the knowledge you get in the NGO world or social business which you might not have at 16 or 17.

About the PlaceCity’ Oslo project

PlaceCity Work Package 3 focuses on the case study of one of the partner cities: Oslo, Norway. Specific objectives of WP3 are: a) build and maintain local stakeholder networks, b) choose tools and strategies from the Placemaking Europe open source toolbox and test them in the project area, c) implement and analyse placemaking initiatives in collaboration with public and private stakeholders and establish sustainable business cases for placemaking, and d) develop a Oslo-specific toolbox for placemaking. PlaceCity project partners in Oslo are Nabolagshager and the City of Oslo – Agency for Urban Environment. This PlaceCity work strives to bring and support placemaking for sustainability and liveliness to Oslo and develop placemaking business models.