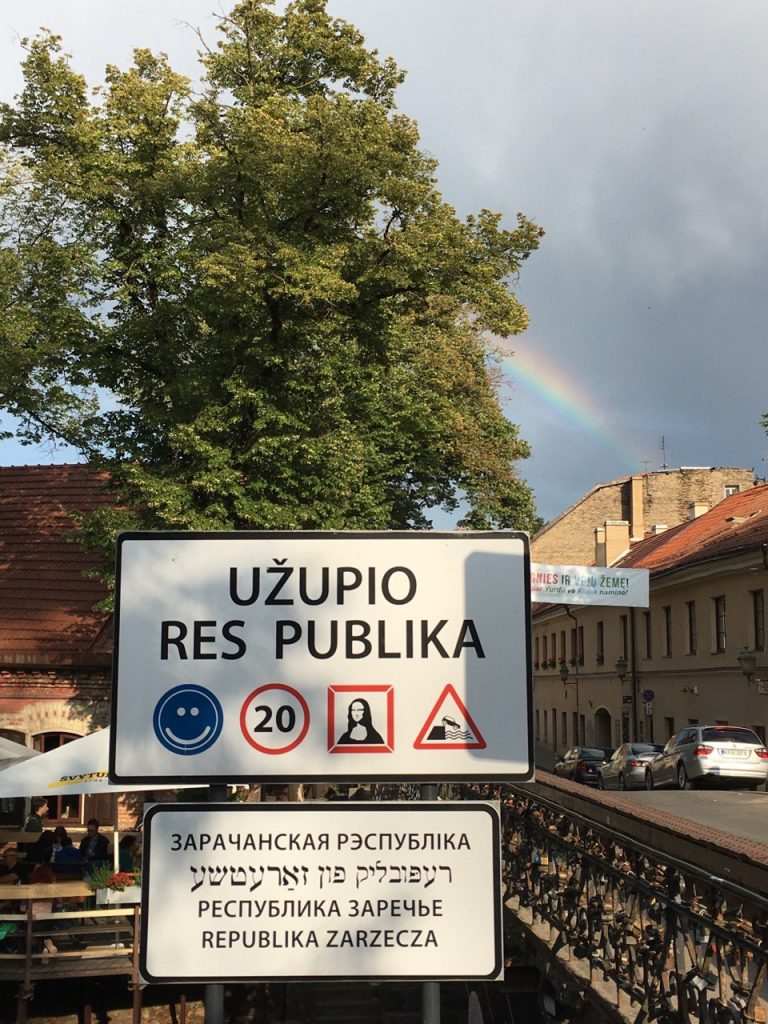 The Republic is a rare island of community, self-governance and art with a sense of lightness and fun. In this interview we learn about how and why the republic was created, and how it has been governed successfully for over 20 years.

Interview with Gleb Divov, Minister of Culture and Innovations of Užupis Republic.

What is the history of the Užupis district?

In the Soviet era this district had factories and mainly was a workers’ living district, viewed as a peripheral, suburban area. After the fall of the Soviet Union, the district was ruined and deserted, there were lot of empty, broken buildings left and there were high levels of criminality, homelessness and prostitution. It was an undesirable area where the locals did not feel at home or safe.

However, Students of Vilnius Academy of Arts, located in the area, and artists saw an opportunity in the abandoned spaces to use as studios and squats, and moved to here in the 90s. This is how the evolution of Užupis began.

What were the aims of the Užupis Republic and how was it set up?

The aim of the Republic was to unite the locals and create a place, where you actually would want to live. Lot of the locals were artists who wanted to create a place that could be based on creativity, friendliness and safety. Their motto was “We will change the place with art”.

Locals – Romas Lileikis, a poet, musician, and film director and Tomas Čepaitis, a writer and translator – were the driving figures in the creation of the Republic. They have been serving as President and Minister of Foreign Affairs since. They created a constitution, a flag, a hymn. The Republic was established on 1 April 1998, on April Fool’s Day.

The café by Užupis bridge became the centre that attracted lot of artists to sit, talk and share ideas about how to transform the area. They admired the Paris district Montmartre and made an established connection with them at the beginning. Užupis is often compared to Montmartre and Christiania in Copenhagen.

It was like a joke for them at the time. However, now the municipality is using Užupis as an example of community building and are very proud of it. We are featured in almost all city brochures and image films about Vilnius.

A lot of the recognition is also due to the fact that a politician, Artūras Zuokas, who was the Mayor of Vilnius, moved to Užupis. He was one of the first who saw the potential of the area and possibilities for the real estate business – and gave a green light. With all the restoration and renovation Užupis began to become a really desirable place to live, which resulted in the skyrocketing of real estate prices.

By the mid-2000s the area became well-known to foreign tourists and became trendy and renovated. Now, it is the second most expensive area for property in Vilnius but it still keeps its arty, laid back profile.

The Užupis Art Incubator, which was the first art incubator in the Baltic States and plays a central role in the Republic, was running as a squat for many years but later was given official status by the municipality itself and funding by the municipality, Lithuanian government and European Union.

How would a visitor perceive Užupis as being different?

You have official entrances and exits where there are signs that you are in Užupis. Foreigners can now even get a stamp in their passports at the Border Post control near the main entry bridge. There are many symbols around and art everywhere you look.

There aren’t old-school squats anymore now but now but a lot of communal living spaces, often different families sharing houses or a larger flat, living together.  It has a very strong hippy, community feel but we view is as the modern way to live.

What is the governance structure? How do you elect the leaders, what is their role?

When you live and work there, everybody knows what you do, so you don’t have programmes you campaign with, you just grow into a job organically through your own work, recognition and reputation. People know each other.

The founder Romas Lileikis has been the president since the foundation of the Republic. If anyone wanted to change and have a different president they could suggest it but so far everyone is really happy with him.

There is no formal governance structure, everyone can make suggestions and we discuss and agree on them. It just works. Meetings take place in the same Užupis Café where the Republic was founded in 1998. This café is referred to as the “Parliament”. We have regular meetings on Monday evenings where anyone can attend.

If you have an idea that you would like to accomplish, you present it at the meeting and the ministers, the president or anyone else with experience can help you with their connections and expertise.

It is not about who makes the decision, it is about responsibility – so you can be elected or you can elect yourself. We just take responsibility for our tasks and ideas.

You are part of the community, because you want to be part of it. You can view the Republic of Užupis as the project of the community of Užupis. Užupis attracts very knowledge people, even people who might work in Lithuanian institutions or even ministries. But what is important is that Užupis is outside of politics, we are about culture.

The Užupis community is in contact with other micronations around the globe.
Our Minister of Foreign Affairs is really active and we have over 400 ambassadors and lots of embassies around the world who spread the spirit of the Republic and popularise the value of communities in other countries. We can see through our case that a community can be a strong player even on the city as well as world level.

Can you tell us a bit more how you got involved?

I am originally from Moscow and since mid-2000s I was travelling and looking for a place where I could express myself with art. Instead of moving to Barcelona, I moved to Vilnius which was an unexpected place.

I knew about the city as Vilnius was a great location for filming of Soviet movies but I had no idea about Užupis. The moment I went over the bridge in 2014 I felt at home. I got involved with the community organically, talking to people in the cafes and bars. It is a place that is open to anyone. I participated in local activities, using experience from my music and show-business background and I subsequently became the Minister of Sounds, Events and Innovation.  After years of my innovative cultural activities in the Republic and internationally, my role was expanded into Minister of Culture and Innovations.

In Užupis I found what I was looking for: I can work with art, technology and music and do something great for the place, country and the world.

Tell us about some of your projects.

If you take a look at the Vilnius city advertisements, Užupis is one of the first places recommended by the Vilnius Municipality and one of the main tourist sights for tourists – both domestic and international – coming to Vilnius. We are contributing to this image constantly.

But lot of city guides take the tourists here and show only the main locations such as the bridge, the art incubator, the Parliament café, Angel- and that’s it. Užupis is way bigger than that.

To change this I created the Užupis’ Summer Day of Culture. It is a celebration which drives people to our district and shows galleries, spaces and different people who contribute to Užupis. Every hour there is a new location where events are happening, so visitors can walk over and see that Užupis is not about just three or four places. All events in Užupis are of great quality and visitors also expect that from us.

This year I opened world’s first multiverse digital art gallery – Digital//Kalnas Gallery. Prepared for pandemic times, it exists as a physical gallery space and in a virtual reality. It is supporting and promoting local Lithuanian and international artists on a global scene. The gallery is also popularising digital art as a “new normal” in the art scene.  It is already recognised internationally and one of the latest exhibitions was opened by the Embassy of the Czech Republic.

The gallery also has educational activities covering topics of Art+Tech, Culture+Tech, and Art+Science.

Personally – I am international curator of the residencies and galleries in Northern Ireland, Ukraine, France and Lithuania. I am co-founder, coordinator and contributor of the various European initiatives.

Užupis has been booming for twenty years. What is its secret?

The community and the connection inside the community are the secret. There are titles and positions, but they don’t mean anything as we all contribute.  If anyone needs help with anything, people will help. If we are doing something together for the Republic, there is no question about helping and contributing. I would say there are many extremely creative residents, with lots of others supporting them. There are not so many communities like this in the world.

And being such a community we are happy to carry the banner of the world’s most innovative micronation.

https://www.uzupiorespublika.com/en/ – Official government website of the Republic of Užupis

https://www.facebook.com/uzupis/ – Official FB page for the Republic of Užupis