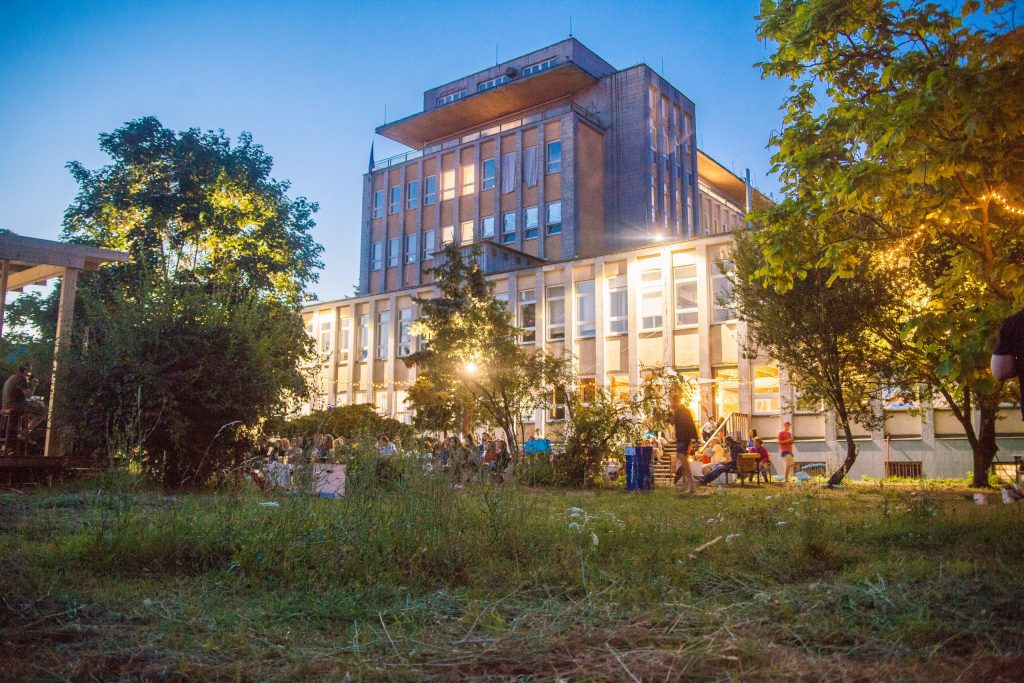 Nova Cvernovka is a community and cultural space located in a former Secondary Chemical school complex in the outskirts of Bratislava. Nova Cvernovka gives home to a community formerly located in a thread factory downtown, providing studios for several artists and local entrepreneurs. By bringing together complementary social functions, it aims to create a better city model where discussions on public spaces, civic society and politics are at the core.

Can you describe this venue and its functions?

This venue is composed of two buildings, a school and a dormitory, of 9000 square meters each. We imagine this space as a village within the city, and for this reason we activated various complementary functions.

The first building, the school, hosts many of the original members of Cvernovka. It features creative studios, offices, cultural spaces, and an event venue, and it has a floor dedicated to public functions such as shops of regional producers and local entrepreneurs. We tried to preserve the social connections established in the old Cvernovka, although this venue is more modest than the previous one: we had to compromise some aspects, for example before everyone had their  photo studios but in this building we have only one photo studio which is shared.

For the second building we planned three functions: housing, public services spaces – such as school, kindergarten, place for elderly people – and studio/offices. The areas are all interlinked, in particular the co-working area is directly connected to a children day-care. We hold educational programs in the events space favouring themes such city history, urban planning, pop culture. There is a library, which we call the Cabinet of Slowness as we envision it as a place where to slow down and which provides readings and literature programs for youngsters. Lastly, we are working on a theatre as there are many artists who don’t have a performance space. This will be constructed close-by, in cooperation with the municipality and with the support of European funding.

How do you select the members?

About 70% of the community members were already part of the group in the Old Cvernovka. We selected the rest of the members keeping in mind the community needs and trying to bring projects that complement the ones already existing here, but always favouring creative and educational projects.

In the co-housing part, we accommodate mostly people who work here as well, but we also have artists in residence and we started to give housing to homeless people. The homeless people housing project started  by complete chance: during the renovation we needed workforce for different tasks in construction, wood work and similar, and we eventually discovered that some of the workers were in fact sleeping rough, and now we have two flats just for former homeless people.

We have a 25-year rent contract with the regional government. At first,  the regional government tried to sell it but, as after four years nobody bought it, they eventually agreed to rent. The building was in a very bad shape and this is why we negotiated cheap rent and we asked to deduct all our renovation investments from the rent.

This building dates to 1948, and it has never consistently been renovated, therefore it required a massive intervention including the renovation of the roof and of the facade, and a new energy system that would be ecological efficiency. We started working on it as soon as we accessed the venue, investing in the structure although we didn’t  have a financial plan to cover the costs. Our first interventions were trying to physically access the venue by cutting down the grass, cleaning it from a previous flood and fungi, and removing accumulated school furniture.

How did you finance the renovation?

The building reconstruction was multi-source financed: we had two loans, volunteer and in-kind help from architects and project managers, individual support from each organisation, who reconstructed their own rented studio space, and various forms of support from our partners and from our fundraising campaign.

We estimated the cost of this venue renovation of about 2 or 3 million euros. Our first step in financing was to negotiate a loan of about 500.000 euros with the social department in Erste Bank, as unfortunately social banks are still absent in Slovakia. Securing this loan took us about eight months, but at the time we were already investing fundraised money into the renovation. The bank found this project risky and asked to present a business plan and evidences of contracts for the studios on rent as well as an 80% collateral. We secured the collateral with a second loan of 200.000 euros from  TISE, a Polish fund, covered by European Commission, and by using two of our personal flats as collateral.

Lastly, as a foundation, we are enrolled in a smaller leasing program for the heating and we have benefitting from community work, donation and reductions for the purchasing of materials.

What is your legal structure and why did you choose it?

We opened a foundation in 2015. Foundations in Slovakia have usually the function of maintaining the cooperatives. We chose the format of a  foundation because we wanted to establish the most transparent entity possible.

What type of relations do you have with public institutions?

It is the first time a publicly owned building is being assigned to artists in Bratislava. I hope our commitment and the efficiency with which we opened the venue in only eight months, give us credibility to keep working with the government. The library, for example, was opened in joint management with the city: we offered the space and the books and we develop the cultural program, and the city covers staff salaries and the library system so that we can join the public library network. We  cover most of the expenses but we can also participate to the Ministry of Culture grants as we are part of the national library system.

Now, we are discussing forms of cooperation with the regional government, because our foundation is independently run by its funders and its legal bodies, but we would like to connect our strategic cooperation points – financial, legal, content – and become more progressive, possibly finding the path for other initiatives in the cities. The municipality and the government has lots of empty buildings and we plan to propose them a business plan which will aim to adapt buildings to social housing.

How do you imagine your future?

Until now we have been focusing on the venue’s renovation but from now on we want to develop an outreach program and improve our communication strategy.

Taking care of the building is a never-ending process and by the end of our current loan we will probably have to develop another financing plan in order to keep developing this venue and bringing innovations and high technology. We have limited human capacity and many projects but in the future we would like to expand this project to the neighbouring zones as we have discovered that there has been a positive response to our work.