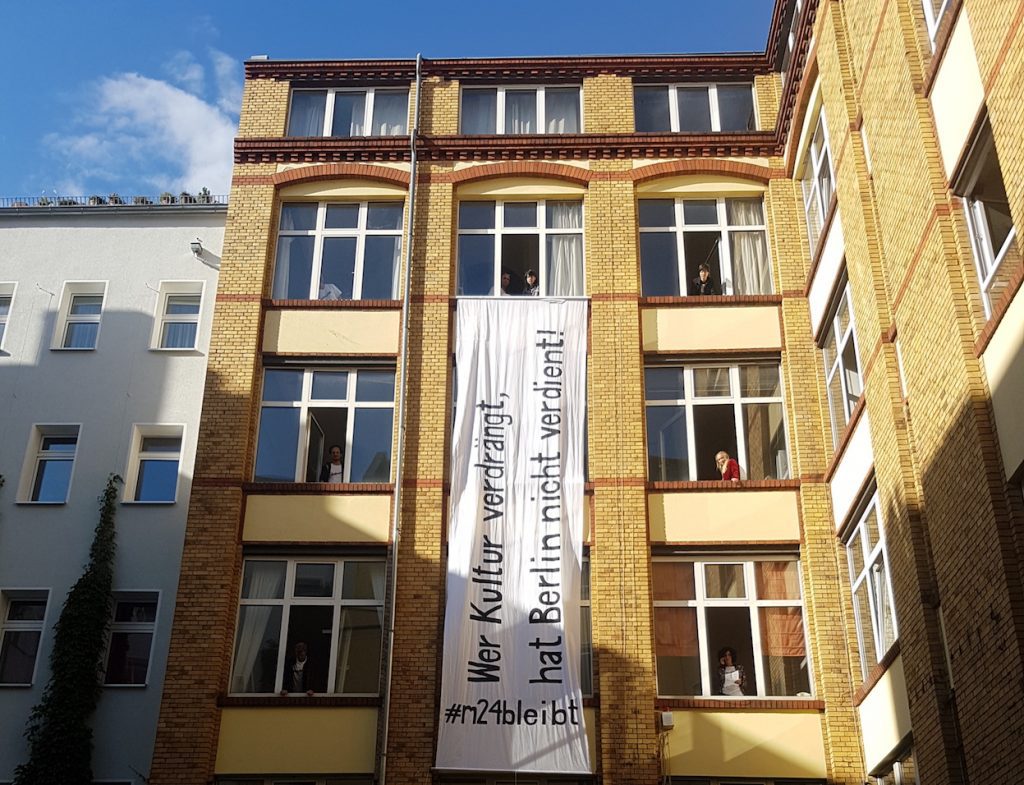 The role of the Studio Commissioner for Berlin exists since 1993. After the city’s reunification it became evident that affordable space for artists would become increasingly rare and contested; therefore the position of the Studio Commissioner was proposed by organised artists to tackle this challenge. Later it was installed within the KulturWerk, a part of the berufsverband bildender künstler*innen berlin (BBK), the fine artist professional association of Berlin. Although the Commissioner’s work is funded at the regional level, by the Berlin Senate of Culture and Europe, it is an independent position: the Commissioner acts as a civil society agent and political advisor for the production of affordable artistic production spaces.

What do you do as Studio Commissioner?

It is a very interesting job, at the interface of administration, politics, civil society, forms of artists associations, people who organise around art studios and also the private sector. Basically it is about developing new affordable and secure studios and as well securing and advising existing studio locations. In the framework of a funding scheme, the so-called working space-programme, former studio programme, the Studio Commissioner is working together with the Senate of Culture together with the private charitable organisation called Gesellschaft für Stadtentwicklung (GSE). This organisation administers the public funds coming from the Senate and does the contracts.

We, as the studio commissioner and office (Atelierbüro), envision new projects, co-develop them, advise administrations and politics, artists and owners, as well as take care of giving out subsidised studios to artists by a studio board (Atelierbeirat) selected according to two factors: the persons receiving studios need to be professionally working artists and have an income that does not reach a certain level. On the other hand, the Studio Commissioner’s activity extends beyond this funding scheme: I work together with the Senate for urban development and housing on the further development of so called studio flats, specially designed social housing units with a work space. Beyond that the Studio Commissioner works with and advises free studio spaces and artist groups that organise themselves. Here I connect them with potential donors and funders and other needed expertise as well as doing advocacy work towards the Senate, the City Council and the public to make the situation of artist studios more visible.

What is the mechanism for artists to access studios that you mentioned?

There is a board of artists that selects the artists to be supported with studios and this board makes the decision. The studios cost 4 euros per square meter, and the chance to get one of these studios is very low, about 1 out of 10. For the same studio, 1 out of 5 was selected 5 years ago: that is a dramatic increase in demand for these affordable spaces.

A part of your work is to hunt for spaces for artists. What is the process to get new spaces into the Atelierbüro’s portfolio?

The process is multidirectional. One way is that we work a lot with another board called Arbeitskreis ‘Räume’– the ‘Spaces’ Working Group – that is also founded on behalf of the self-organised artist scene and is now funded by the Senate as well. Initially there was only the Studio Commissioner position but for the last 2 years, different artistic spheres like dance, theatre, literature, music and project spaces have also had their own “space commissioner”. We regularly meet with the Senate for Culture and the Gesellschaft für Stadtentwicklung (GSE) and have developed a long list of publicly owned spaces – and also private ones that come through different channels.

Is it not enough to rely on the public administration for available studio spaces?

The role of the studio commissioner is the one of an independent corrective factor. Sometimes I have to be someone who is saying, ‘well, this is not going in the right direction.’ For example, there is a studio house in Pankow called Prenzlauer Promenade, a big, old East German building with 12,000 square meters. It was sold to a publicly owned housing company that made a contract with GSE and it turns out that in the end it is not developed very fast and the cost design is not transparent here. So my job is to point a finger at that and say that “this is not productive and you and we should do it differently.” Therefore I am relying on external expertise and do calculations to see how prices can be lower and how could we do things differently, how can we renegotiate the arrangements for artists. The special case here is, that an existing artists group secured the whole building, which will now be transferred to the funding scheme, the working spaces programme. So the existing artists don’t want to be pushed out and we need to find a compromise that is ok for everybody.

How do private investors enter the picture?

Private investors are also interested in having art studios on their premises, because it is an attractive feature for them and can add extra value to the development. As there is budget from the Berlin Senate to subsidise long term studio spaces, it is also economically interesting for some investors. While the free market might provide more revenue at the moment, funded studios can generate a long term income with little administrative effort, since there is a general tenant, the GSE. Another reason for private investors to foresee studios is when a district asks for certain not-only-commercial uses, before giving out a planning permit. So studios seem for many owners an interesting choice. Some also are really convinced and want to support art and artistic production. More than half of the subsidised studios are within privately owned premises. However this becomes – especially in inner city parts of the city – increasingly contested, since the rental prices are exploding.

What is the position of the Studio Commissioner within Berlin’s quite diverse field of initiatives that are proposing different uses of public properties?

We have regular meetings with the different space commissioner boards, also together with the Senate for Culture and the Gesellschaft für Stadtentwicklung, and I am also part of many civil society initiatives. For instance, I am involved in the Haus der Statistik where I also want to secure spaces for artists. The Haus der Statistik, an unused office complex at Alexanderplatz, right in the heart of the city, has been sold by the national government to the city of Berlin for about 60 million euros. The building is about 40,000 square meters with a potential 10-15,000 square meters to be built around the existing building. It is a massive chunk of land and building. Since January 2018 the initiative Haus der Statistik is in close negotiations with the responsible entities, the Berliner Immobilienmanagement GmbH (BIM), the district of Mitte, the public housing company WBM and the Senate for urban development and housing. It is a big bargain and of course also a delicate path, you need to find a balance, because if you are a civic initiative you have no real mandate. The mandate you have is that you have been there at the right time at the right spot. You need to be transparent about it. We are only one interest group. But if you want to be part of this public endeavour that is perfectly fine to say why you and why not somebody else. There is a very big amount of potential users behind the Haus der Statistik initiative and the initiative always proposed an inclusive model for its use.

Did the municipal acquisition of the Haus der Statistik reverse the trend of privatising public properties?

Privatisation has been a multifaceted process. There was a political will by the local parliament to change the logic of privatisation: they realised that selling public property for the highest bid does not really pay the city’s debt. The initiative Stadtneudenken was born in 2012 with the establishment of a city-wide roundtable for real estate issues and by organising the roundtable meetings in the Parliament building, the initiative managed to engage politics to make the city’s real estate management more transparent. The new, left-left-green government announced in its coalition statement that they wanted to change the way public properties are dealt with. Due to the very high pressure on the housing market and also on the market for production spaces, the new political paradigm is that ‘we do not sell any more private land.’ There is even a shift now that some properties that were previously privatised are now being bought back, using the local government’s right to buy first when a property goes onto the market in places with special urban development regulations.

How does this situation change your work?

With this shift in politics and policies, long term investment will go into publicly owned buildings. Of course, sometimes also publicly owned properties can be costly to use because some public entities still have an interest in making profit with their buildings. These entities, like the public housing companies, now will have to shift their mindsets and business models as well and are doing so.
If we want to develop a publicly owned building into studio spaces, it usually takes a very long time as there are many stakeholders in the process: different senates have claims over different properties and if another senate wants to put money into developing a building, it needs to transfer it into its own ownership. Therefore it is obvious for me that it is important to activate and involve also private actors, not necessarily private market actors but actors like cooperatives that want to develop properties in a different, more user-oriented and value-based way for the common good. Not for maximum profit, maybe for a healthy profit: there is the reinvention of long lease contracts taking place now, and the senate of Berlin together with different stakeholders seems to understand that it is a very important and good way to give publicly owned lands especially to private, common good-oriented investors. However, the interest rate is many times still too high for common good-oriented functions. It is getting more flexible now.

In the past 25 years, since the creation of the Studio Commissioner’s role, has there been a continuous political will to secure places for artists in Berlin?

Sometimes the administration perceives it as extra work to collaborate with the Studio Commissioner’s institution and to work with various artist groups but this cooperation on the long run helps the administration to receive important and necessary information about what the needs are, get to concrete projects and cooperation partners. This is a learning process: the new administration created a Senate for Culture and Europe, a separate entity with competences that belonged to the Lord Mayor´s Office before. To sum up, there is a continuity in that politicians have, in the past decade, recognised the importance of artists in Berlin. However, the transparent and participatory development of artist spaces needs to be continuously renegotiated. And it is a continuous effort for the Studio Commissioner to remain independent.