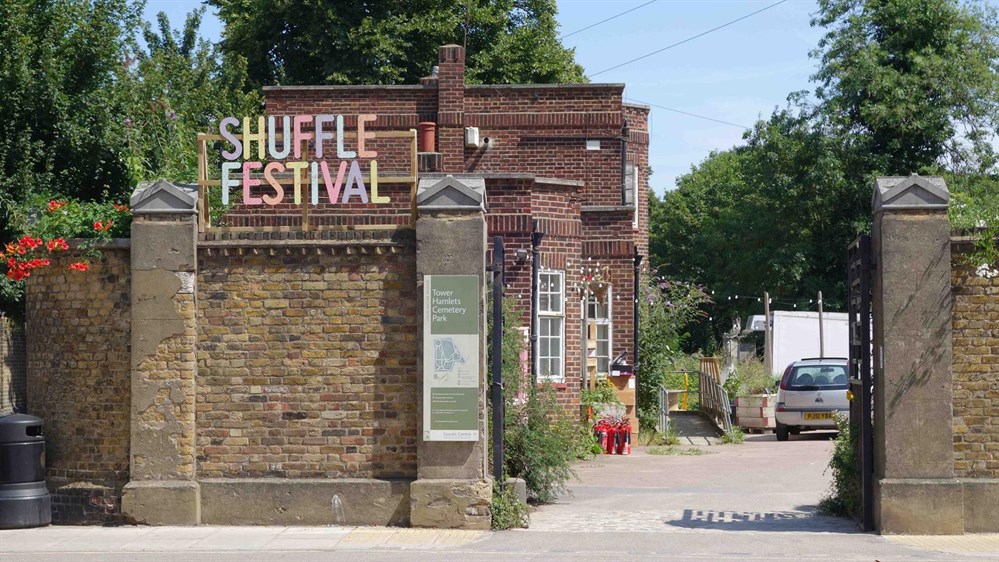 Shuffle Festival is an annual event that exhibits creativity through films, performances, architectural installations and music; providing an important gathering point for the local community of Mile End in London. In April 2015 Shuffle Festival reached £57.527 through a crowdfunding campaign on the Spacehive platform to redevelop a lodge in the Tower Hamlets Cemetery Park into a community café. With the support of 322 backers, the Shuffle team, together with the Friends of Tower Hamlets Cemetery Park could collect part of the money necessary for the renovation.

“We have all these people behind us and we can raise this capital, so you need to take us seriously”

You launched a crowdfunding campaign to turn a lodge into a community space. What is the story of the building?

The Lodge was originally built as a records office, but there is little knowledge of its use and it has been empty for 2.5 years. It is owned by the Tower Hamlets Council, and the Friends of Tower Hamlets Cemetery Park really want to turn it into a base for their visitor-centre and their office but also a café and an exciting workshops space. We have been working with The Friends and are hoping that the Council will grant a long lease, although currently no decision has been taken and it is a very long process. There is going to be a café with a decking and a ramp to make it wheelchair accessible. Upstairs, there will be a meeting place and the offices of the Friends.

How did the campaign work?

I was quite sceptical about it because people are always doing it; people are always sending a million things: “Can you fund the watch that I’m making?”. So we did not know if it would work. But we had an inkling because we had such a big audience for the festival. Trying to find interesting spaces, and then trying to programme really interesting artists, rather just doing it in a haphazard way, we tried to make it as good as possible. It meant that we had an idea of how many people would be willing to give to the project and how much money, so we made an estimate. We did not estimate how much the building would cost, but how much we would get, so it was not too much to ask for.

We did it and it was really successful, much more than we could have hoped for. We just made a short video, put it online with upbeat music, and the local paper played a great role in its spread. We reached the target without any problems. I think, if you invest in building up a crowd at the beginning and have constant engagement with them, then the second bit about asking for money is less hard than you think. We also had people’s trust because we built temporary buildings during the festival. Another important thing is that we did it not just do it to raise money, but also to legitimise us as an organisation that wanted to do a permanent community space. We were a festival wanting to build a permanent space in a building that is owned by the Tower Hamlets Council, so this meant: “We have all these people behind us and we can raise this capital, so you need to take us seriously.”

Interview with Lizzy Daish on 7 April 2016