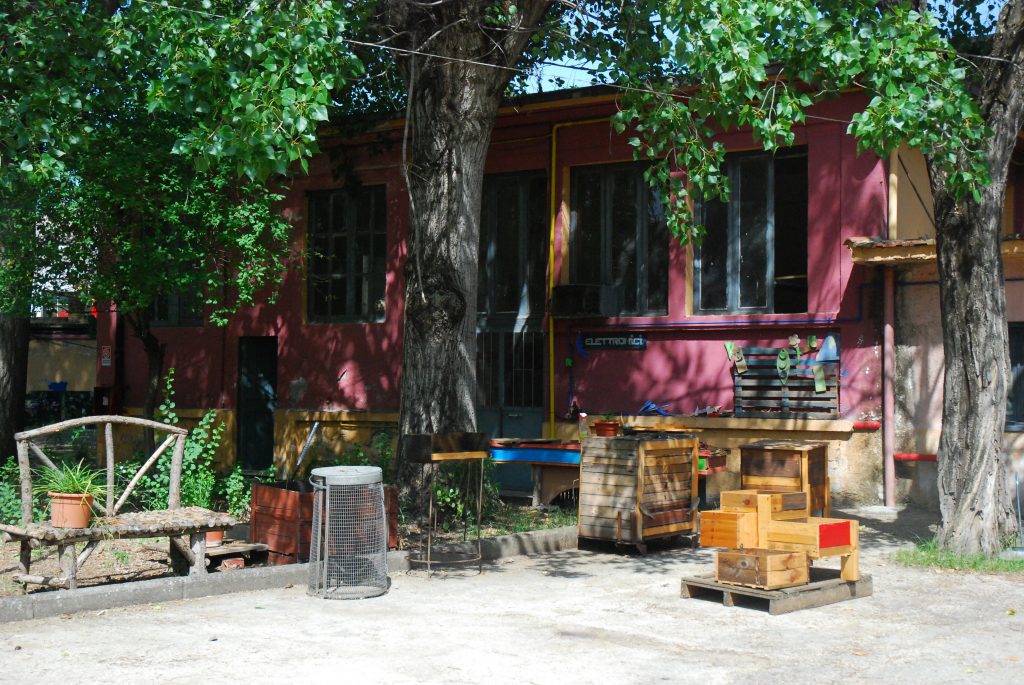 Officine Zero (OZ) was born in 2012 following the failure of the RSI corporation (ex Wagon-lits). The re-appropriation of the corporation’s facilities by the workers, with a vast support of the social network, has fuelled a process of revaluation of the space, based on a collaborative economic system. Officine Zero is made up of diverse working realities like workshops and co-working spaces, which actively cooperate for the upkeep of common areas through the organization of several workshops, initiatives and social events. OZ represents an interesting example of an alternative reuse of spaces, which would otherwise be abandoned or bound to speculative projects.

What is Officine Zero and how did it come about?

Officine Zero was born in 2012 following the failure of the RSI corporation. The corporation failed after the property was sold to an entrepreneur whose real intention was speculative rather than productive. As a matter of fact, after the failure of this speculative attempt, the owner left the corporation with millions of debts in suretyship, leaving the workers with no salary and serious Union-related issues. The workers thus entered into a dispute supported by community centres such as Strike and Esc and by many other social actors. They then started to plan a restoration of the facilities and to rethink their working potential. Before getting to where we are today, we tested ideas and projects by trial and error. It has been two years since we started to give a more appropriate direction to the activities carried out in here. Our goal is to improve the conditions of the facilities that were already here, enhancing the work of carpenters, locksmiths and upholsterers.

What is the role played by the public administration in the OZ project?

Since the very beginning the Region has been supportive of the regeneration project aimed at saving this place from decadence and speculation. However, being a public institution, it cannot directly intervene and buy this private space. This land is indeed in a state of bankruptcy and thus relies on the decisions of the court of Lecco. Nevertheless, even without institutional help, we found the motivation to keep on working on our project. Looking at the complexity of the space at our disposal, we understood that our main strength was to be found in the professional skills and experiences provided by the members of our community. But how do you transform these competences in profits? We needed to start by building solid relationships among the workers and then move to the design of projects. These can arise from bottom-up initiatives, as in the production of chairs to be sold at the market. For instance, the carpenter relies on the communication folks working in the co-working space to advertise his/her creations. On top of that we also need an administrative structure that helps us manage and record all of these transactions.

In order for this system to really work funds are necessary for the renovation of the facilities and to guarantee salaries to the workers. We have therefore drafted a document responding to the call for proposal issued by the Regional government, which redistributes financial resources provided by the EU. Although the local government has considered our proposal, we are still facing the ownership issue, which questions our legitimacy to manage this place. Ideally, we would have to find an agreement with the Court allowing us to keep the space for the time necessary to obtain the European funds. We are talking about 3 to 5 years worth of time.

For now we are working on the draft of an economic model that we’re planning on implementing. OZ is an occupation and as such it is not supposed to benefit economically from the property. We get by renting our space for advertisements, organizing social events and through proposals of ideas and projects that provide working opportunities.

As far as our personal competences are concerned, every member plays a different and equally important role within each project. This is the only way to accomplish our goals. In such a large organization, we need volunteers who take care of our space in their free time but most of all, we need people who invest full-time in the projects in order to better cope with relational and managerial issues. Indeed, in this context mutualism and cooperation are fundamental and are instrumental to make a better use of the economic and human potential of OZ.

Within the field of cooperative economy there still is room for experimentation, and that is exactly what we do: we experiment alternative methods of working together efficiently.

What does collaborative economy mean to you?

The term perfectly reflects the nature of OZ’s project but it is sometimes mistaken for what is now called “sharing economy”. As opposed to the latter, a collaborative economy not only includes economic exchanges but also a more complex kind of sharing, one that goes beyond the mere exchange of money and that involves collaboration towards the  same goal. A collaborative kind of economy is thus more complex, it stems from the need to create a social reality of collaboration, based on the competences of the participants, aimed at creating a working structure that functions along principles of team-work, in which everyone is responsible for his/her own work and of the other’s. This aspect is peculiar to collaborative economic systems and it is particularly delicate and hard to implement effectively.

How are decisions taken in a collaborative system such as the OZ one?

There are several assemblies. The actual members of OZ take part in the plenary assembly. Then there are smaller assemblies that deal with specific projects, such as the co-working space, but also the laboratories, the cafeteria, the project for the recycling and reuse of waste and the most recent one that works at creating a network of all recovered European factories. Each of these assemblies is represented in the plenary assembly once a week by a spokesman. These meetings tackle issues which have previously arisen, allowing members to come together, discuss, and take consensual decisions. However such mechanism is definitely not time efficient, for the consensus reached in the assembly does not always translate into productive enthusiasm and determination on the ground.

What is your relationship with the community around you? Is there a real contact with the citizens?

Taking into account the fact that our team is very small, it is hard for us to find the time to work outside of OZ. Still, we try to implement projects that bring us closer to the citizens such as participating in the neighbourhood monthly market. Moreover, we provided the furniture for some events organized by community centres. We are also involved in the design of a new co-working network called Corete. On top of that, we are part of “Roma città comune”, a movement that requires our presence on the ground at least once a month. Due to all of these projects, our time is limited and we can’t get involved in any more initiatives. In fact, we are not an activist group but we are trying to create jobs. Our main concern is to initiate activities that contribute to the improvement of working conditions.

Officine Zero defines its work as both material and immaterial, what is your definition of immaterial work?

We call it immaterial work but it is still physical work. As I told you there are people that have different competences here. For instance, I am a photographer, and Manfredi is an historian. We therefore are producing immaterial work while the carpenters are doing material work. Here, we are experimenting a way to combine these two working approaches.  However we realized it is not to be taken for granted, but rather complex. Indeed, the OZ members lived very different lives and working experiences, it is thus not only a matter of combining different working approaches but also different mentalities. For instance, it is hard for a worker that has always worked in a factory line type of system to self-manage time and work. We don’t have a rigid, vertical management system, but rather a horizontal one, one in which there’s a need for workers to become responsible for and aware of their own work.

During the visit of co-working space:

The co-working space disposes of 17/18 workplaces, which host architects, engineers, environmental associations, illustrators, and painters. There are also rooms dedicated to the Clap project (rooms for autonomous and temporary work), which provides all workers with fiscal and legal consultancy.

OZ doesn’t like the idea of renting working spaces, so instead of collecting rents, we are now thinking of collecting participation shares that would be devolved to the upkeep and construction of this place. Truth is, financial funds are extremely needed and we are trying to find new strands of revenue, besides those coming from the work linked to individuals and the work stemming from the collaboration of workers and competences under the label of OZ.

Our project aims at creating jobs with little or no funding.  We were born out of a rebellion but we don’t want to be identified as an activist group. Here, we are investing in a professional future.

The interview with Manfredi and Dominga from Officine Zero was held on 12.07.2016 by Eleonora Rugiero and Cosima Malandrino