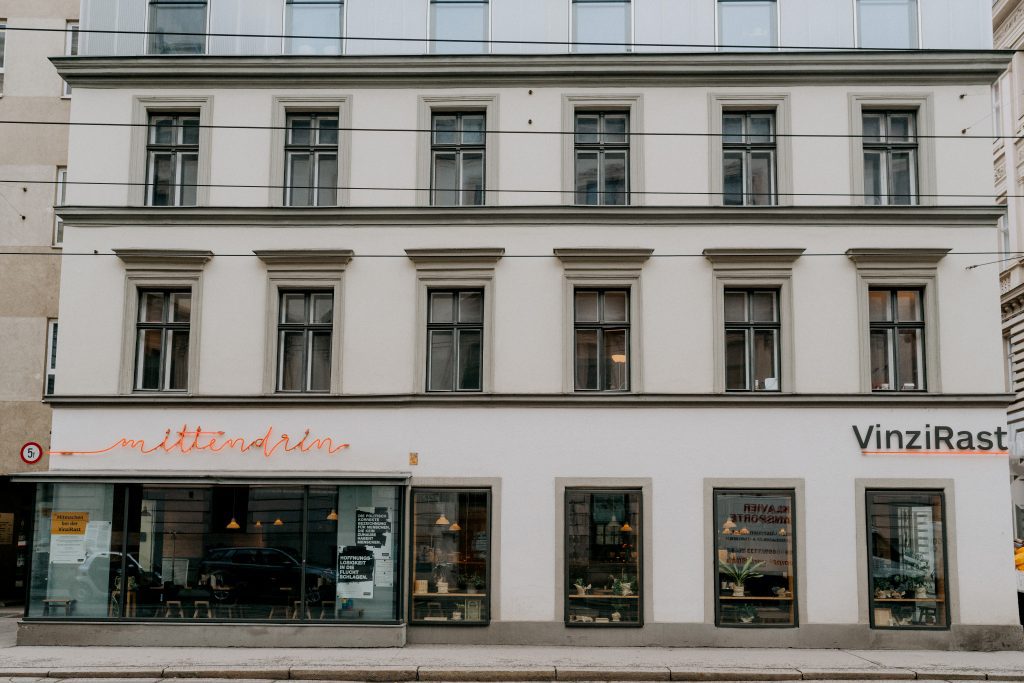 The social initiative VinziRast is an ambitious volunteer-based organisation that aims to give a second chance at life for refugees and formerly homeless people through various channels. VinziRast-mittendrin, a housing project where homeless people, students and refugees share the space, and their latest project VinziRast am Land, a sustainable permaculture project with the homeless in the countryside, are some of the organisation’s most inspiring initiatives. The story of VinziRast, with its various spaces and projects is a tale of solidarity and social change.

Währingerstrasse is one of Vienna’s high streets with tram tracks, bike lanes and parking cars. An eclectic mix of turn-of-the-century buildings and twentieth century Gemeindebau are lined up along the street, with one building standing out from the otherwise straight line of matching facades. VinziRast-mittendrin announces itself from far, as an inviting presence: when approaching the building, we see a lot of life inside. We enter the building through the cafeteria, serving lunch for those living or working in the neighbourhood. After crossing the inner courtyard, serving as a terrace for the restaurant, we head upstairs to meet Renate Hornstein, VinziRast’s Public Relations manager, who has been working with VinziRast for over Four years. She receives us at the building’s rooftop terrace, a warm and cosy place where tenants and volunteers can spend time together, taking care of a small community garden.

It all started with VinziRast’s former chairwoman, Cecily Corti, who founded the organisation in 2003. She succeeded in securing a first space to help homeless people: a small night shelter in Meidling, Vienna’s 12th district, providing people in need with a bed, warm food in the evenings and a breakfast in the mornings. At that time, nobody predicted that the organisation would grow as big as it is today; the success and support from the Viennese society came slowly. Nowadays, VinziRast runs a great variety of projects in the city of Vienna.

Arguably the most visible of the VinziRast ventures, the building of VinziRast-mittendrin hosts three different projects. VinziRast-mittendrin is a unique and unusual housing project bringing together students, former homeless people and refugees in the same building in 10 shared flats. “The goal of the integrative housing project VinziRast-mittendrin is to create a lively, diverse, open, multifaceted, solidary community, which offers different opportunities and support to the individual. Our residents learn from each other, learn a lot about the respective cultural backgrounds of their fellow residents, give each other security, and provide each other with a sense of belonging.” Renate tells us. A big difference between VinziRast-mittendrin and a public housing project is the exchange and community among the different groups who might otherwise not mix. They each benefit one another. The life experience of the different groups opens their horizons about each other’s lives, on the other hand, they can help each other out in concrete ways, such as with language skills, support with admin or simply cooking a meal for the flatmates. Students tend to have a higher turnover but the former homeless and the refugees stay until the moment when they feel they need to move on and go live on their own in the wider society.”

The restaurant in the building makes VinziRast’s work more visible, not excluded from the city, but a part of it: “Mittendrin” is German for “in the middle of it all”.

The third project is VinziRast-Chance, a space where asylum seekers (who are not allowed to work officially) attend German language lessons and can discover their creative talents in workshops. Whether through sewing, carpentry work, producing upcycled products or repairing old bicycles, asylum seekers can learn to improve their skills while waiting for their asylum recognition. The VinziRast-Chance project is supported and designed solely by volunteers and the material used is donated or recycled from local stores. The workshops can also be occasionally used by the VinziRast-mittendrin’s in the afternoons. For example, they repair their bicycles there and do small crafts projects.

The importance of volunteering and independent financial support

As Renate recounts, Cecily Corti remains an important figure for the organisation: “Cecily Corti was – and still is – famous for her commitment in helping homeless people. She knew influential people and had great contacts within the Viennese society. She started the project, managing and being committed as much as possible, doing any kind of activities in the everyday work of homeless assistance. Her presence and work inspired many of her contacts to volunteer as well and support the project financially.”

Thanks to the work and the vision of an influential woman like Cecily, VinziRast manages to increase its influence on the Viennese community even after almost 20 years since its foundation. Nevertheless, Renate confessed to us the need to reach a new generation of donors and volunteers through social media as most of the volunteers in VinziRast are older and have been with them for a long time.

VinziRast’s spirit is based on volunteer work: while only a few people are hired by the organisation (including Renate), 95% of people involved in the projects are volunteers and some projects are even run completely by volunteers. VinziRast’s current chairwoman, Veronika Kerres, has also been volunteering for the organisation for almost 20 years now. Volunteers are engaged at many different levels, some cook a few times a year, while others join the projects on a regular monthly basis, spending 10 hours a week or even more on site.

VinziRast is not receiving any kind of public support or funding. Its work is based on private or corporate donations from volunteers and donors. VinziRast’s private financial support gives a certain independence to the organisation: financial independence is a crucial value for the organisation: relying on public funds would constrain VinzRast to follow regulations or criteria imposed by the public authorities.

VinziRast is able to help those who are at risk of falling through the cracks of the public support system. “VinziRast finds itself in a niche”, explains Renate. “People coming to us usually don’t receive any kind of support from the state: they probably don’t come from the right country or haven’t lived here long enough, or are not fitting certain criteria to be supported.” For most public support schemes have difficult requirements to fulfil before receiving the right support. On the other hand, VinziRast is open to everybody who needs to be assisted. Space and human resources are the only limit.

A visible change to Renate’s work has been an increase of women seeking support at VinziRast’s night shelter. Thanks to the access to more information now, women can reach more support schemes and services and find who to talk to in an emergency situation: “Traditionally homeless women could count on friends’ support”, argues Renate. She recalls the story of a woman who lived as a homeless person for two years with nobody really knowing it, not even her 20-year-old daughter. Women were usually more afraid to go to official homeless places, to shelters, especially if they were victims of violence. But now, women have more accessibility to information and they can reach VinziRast easily: “VinziRast-mittendrin has also a small apartment hosting only women”.

Permaculture project with the homeless in the countryside

The future of VinziRast lies in Vienna’s countryside. The village of Mayerling, located south west of the capital in the Lower-Austria Region, will house VinziRast am Land.

The project will take place in a large terrain of a former hotel which has been adapted by an architect to host around 40 to 50 formerly homeless people who will start a permaculture project. The project should be self-sustaining in the long term through the sale of eggs and vegetable boxes, catering service, as well as space rental. Launching VinziRast am Land was postponed because of the pandemic as it was not possible to continue the renovation works. Renovation was needed for the interior design of spaces as the infrastructure of the hotel is, at its present form, not suitable to create a community, especially if limited to single rooms and lacking community spaces.

The concept of VinziRast am Land was developed by VinziRast’s manager, who wanted to start a project in the countryside, combining housing, social inclusion and the possibility of employment. During the early stage of the project’s conceptualisation, Dennis Reitinger, an expert farmer willing to join a permaculture project resonated with the VinziRast’s vision and could imagine himself living and taking care of the space. Dennis Reitinger is already living in the future space of VinziRast am Land, leading the reconstruction of the site with volunteers.

Renate foresees also the possibility of having beneficiaries moving from other VinziRast projects, exchanging their urban lives for the countryside. As for some VinziRast tenants living in a city is not the best lifestyle, some could enjoy being in a more quiet place and change their lives for the better, once more.

You can visit VinziRast-Lokal mittendrin and enjoy their excellent cuisine and hospitality in Währinger Straße 19, 1090 Vienna. Moreover, you can donate and help VinziRast in many different ways, find more on their website: https://www.vinzirast.at/spenden/